Time for an Infrastructure Push?

The prospect of an infrastructure push is seductive. Economic and job growth has been sluggish. Interest rates and thus borrowing costs remain relatively low. At least some kinds of infrastructure might help to boost long-term growth. Thus, the October 2014 World Economic Outlook from the IMF includes a chapter on "Is It Time for an Infrastructure Push? The Macroeconomic Effects of Public Investment." The IMF writes:


[I]ncreased public infrastructure investment raises output in both the short and long term, particularly during periods of economic slack and when investment efficiency is high. This suggests that in countries with infrastructure needs, the time is right for an infrastructure push: borrowing costs are low and demand is weak in advanced economies, and there are infrastructure bottlenecks in many emerging market and developing economies. Debt-financed projects could have large output effects without increasing the debt-to-GDP ratio, if clearly identified infrastructure needs are met through efficient investment.

Like so many statements by economists, this may seem straightforward, but it is actually hedged with qualifiers. For example, the first sentence refers to the positive outcomes arising "when investment efficiency is high," and the closing line states "if clearly identified infrastructure needs are met through efficient investment." In the middle, there is a reference to "infrastructure bottlenecks in many emerging market and developing economies," but this sentence carefully does not claim that infrastructure bottlenecks are a first-order problem in advanced economies.

I take from this that the case for an infrastructure push is especially strong right now in those "many emerging and developing countries." Here's a figure showing current levels of electricity, roads, and phone lines by region. But of course, infrastructure would also include water and sewage, airports and seaports, rail, wireless connections, natural gas and oil pipelines, and more. 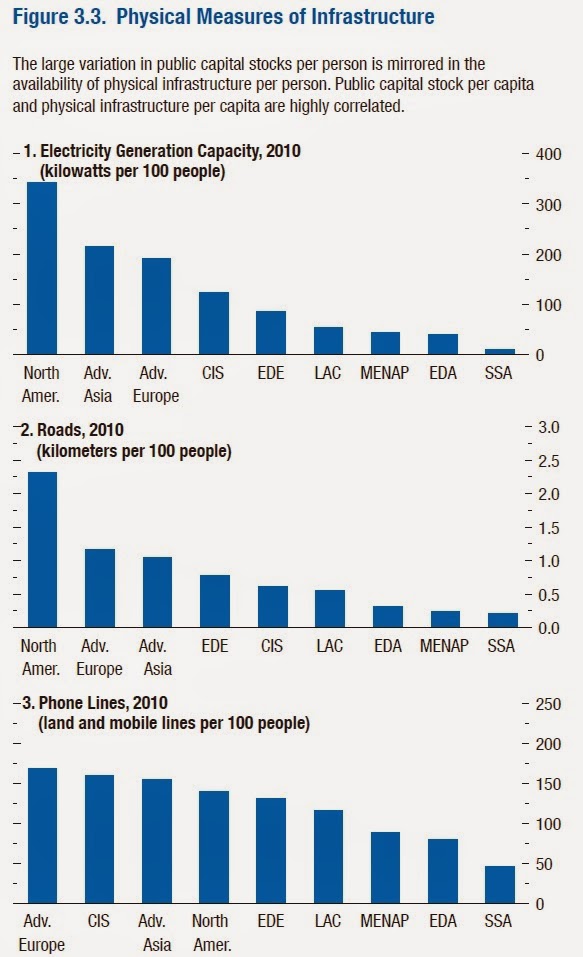 Japan offers a mildly cautionary tale for advance economies on the limits of infrastucture investment. 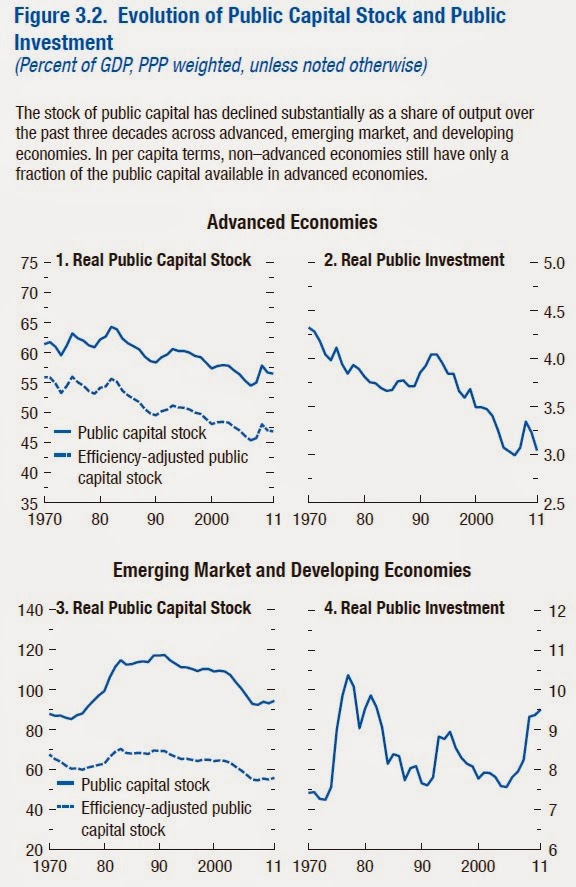 What about for the advanced economies? The IMF chapter goes through a variety of calculations that attempt to separate out the specific effect of a boost in public infrastructure spending. The report notes (footnotes and references to figures omitted):

What about infrastructure in the United States? Here's a figure from the ever-useful FRED website run by the St. Louis Fed showing total public construction spending in the U.S. In rough terms, about one-third of this is highways and streets and another one-tenth is other transportation, one-quarter is education-related construction, about one-sixth is sewage and water. Other categories include power, public safety, and conservation and development. I'm not surprised to see a boost in infrastructure spending during the Great Recession; after all, that was part of the "economic stimulus" package that passed in 2009. But I had not realized that public construction spending had actually been rising fairly briskly since about 2005, well before the recession hit.

As someone who lives in Minnesota, I favor more infrastructure spending. After all, about seven years ago a major bridge in Minneapolis collapsed during rush hour. After the brutal Minnesota winter, the potholes on the roads are large enough to swallow dogs, and sometimes appliances. But like a lot of economists, I have two concerns about how to focus and direct a push for more infrastructure, so that it means more a nice shiny bridge-to-nowhere in every Congressional district.

1) There's always a tension between civil engineers and economists. The engineers often look at every infrastructure limitation and see a building project that ought to happen. Economists often look at the same problem and see ways that  the existing infrastructure might be used more effectively. For example, instead of just automatically trying to build more roads, water-mains, electrical capacity, and the like, how about looking for ways to conserve on the need for using this infrastructure. Many economist favor finding ways to charge more at peak usage times as a way of spreading the use of infrastructure over a wider time period each day.

2)  I have a hard time believing that U.S. economic prosperity in the 21st century is going to be built on concrete and asphalt. As I said, I'm all for fixing bridges and potholes, updating the municipal water pipes, and the like.  But what about infrastructure for the 21st century? Some of this infrastructure may be funded directly by the government, but most of it will require a fairly high level of government support and cooperation if it is going to happen. For example, as we repair current highways and bridges, how about starting to build the capacity for smart highways and self-driving cars?  What about a smart electricity grid, both to facilitate the use of decentralized renewable energy sources and to implement higher prices for large users at peak times? The U.S. needs to update its rail-freight system, which could move large numbers of trucks off the highways--thus reducing congestion and saving on road repair costs. The U.S. needs to update its network of oil and gas pipelines.  When the IMF talks about "clearly identifiable needs" and "efficient investment," these seem to me some of the main U.S. infrastructure issues, although the list could doubtless be lengthened.

And of course, this is one of the harsh truths about infrastructure spending when budget deficits are already high and public debt has been rising: in the long run, a commitment to higher public infrastructure spending will have to compete with other spending priorities, like health care, payments to the elderly, defense spending, and all in a context of rising interest payments owed on past government borrowing.