Consider three ways in which a society or culture can deprive women of their ability to make their own decisions: the society can deny women control over household resources, it can condone wife-beating, and it can allow child marriage. According to a World Bank analysis of 54 developing countries 13% of women in these countries experience all three of these deprivations, and only 21% experience none of them. 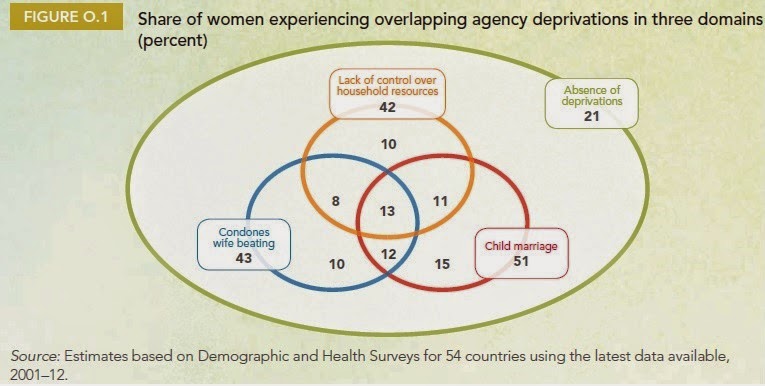 Of course, the three limitations on women above are not an exhaustive list. "Legal discrimination is pervasive. In 2013, 128 countries had at least one legal difference between men and women, ranging
from barriers to women obtaining official identification cards to restrictions on owning or using property, establishing creditworthiness, and getting a job. Twenty-eight countries—mainly in the
Middle East and North Africa and South Asia—had 10 or more differences. In 26 countries, statutory inheritance laws differentiate between women and men. In 15 countries, women still require their husbands’ consent to work. Other laws limit women’s agency in marriages and family life."

The case for equality of women is of course fundamentally rooted in considerations of justice and fairness and basic human decency. But it has an economic dimension as well. For example, "intimate partner violence" has substantial economic costs. As the report notes (citations omitted):

"Different models have been developed to estimate the economywide costs of IPV [intimate partner violence]. Although these models vary in their core assumptions, they generally take into account some combination of direct and indirect costs that are both tangible (and can be monetized) and intangible (which cannot be readily monetized). These estimates typically include costs related to service provision, out-of-pocket expenditures, and lost income and productivity. IPV incurs direct costs on services in the health, social service, justice, and police sectors. ...  Women exposed to partner violence in Vietnam have higher work absenteeism, lower productivity, and lower earnings than working women who are not beaten ... In Tanzania, women in formal wage work who are exposed to severe partner abuse (both lifetime and current) have 60 percent lower earnings."

Studies done in various countries suggest that the social cost of intimate partner violence can be comparable to or exceed what is spent on primary schooling in that country. 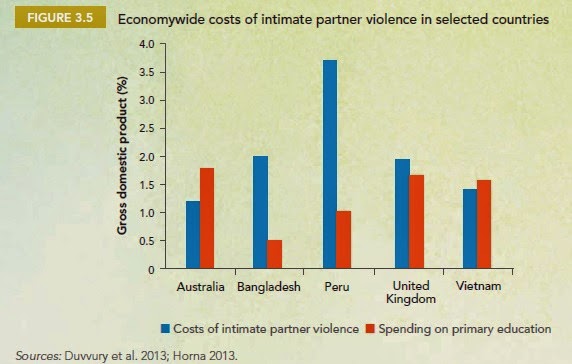 There is no magic bullet policy answer to improving the life opportunities of women. Legal and social changes that allow ownership of property, inheritance rights, credit opportunities, and more all play an important role. Raising the education level for teenage girls can be quite important:

"In Turkey, for example, extending the compulsory education age by three years changed parents’ and girls’ aspirations for the future—in just five years, the share of 15-year-old girls who were married fell by 50 percent and the probability of giving birth by age 17 fell by 43 percent ... Increasing incentives for girls’ schooling through CCTs [conditional cash transfers] can be an effective way to tackle regressive gender norms. This approach has been successful in Bangladesh, Pakistan, and Turkey, for example. ... Benefits to girls of staying in school can extend beyond the value of educational attainment, enhancing their agency in other ways as well. For example, in Malawi, a CCT targeting 13- to 22-year-old girls and women led to recipients staying in school longer and to significant declines in early marriage, teenage pregnancy, and self-reported sexual activity ..."

Many of these changes will be facilitated or supported as women come to play a larger role in political institutions. As one example, the share of women in national parliaments has been rising in all regions of the world over the last couple of decades, as shown in the figure below. But glance over at the vertical axis, and you see that in no region does the share of women in the national parliament exceed 25%. 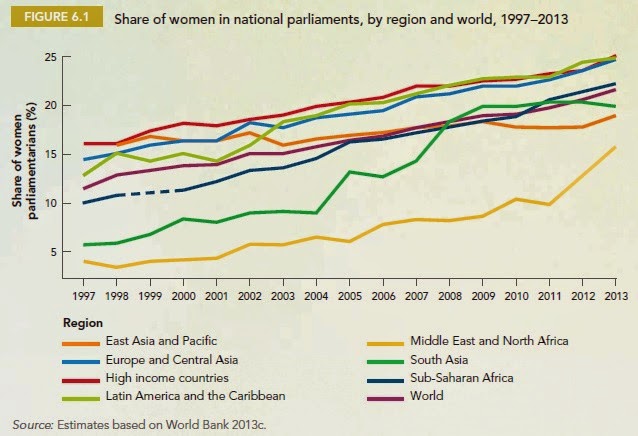