Counterterrorism policies are an acid test for anyone seeking to maintain a dispassionate attitude about costs and benefits. My gut reaction, which I suspect is shared by many, is that more spending to reduce the risks of terrorism is better. But John Mueller and Mark G. Stewart have taken up the gauntlet of reminding us that the core logic of costs and benefits applies here, too.  Their piece on  "Responsible Counterterrorism Policy" appears as Cato Institute Policy Analysis #755 (September 10, 2014).  Their article on "Evaluating Counterterrorism Spending" appears in the Summer 2014 issue of the Journal of Economic Perspectives (28:3, pp. 237-48), which is freely available online courtesy of the American Economic Association. (Full disclosure: I've been Managing Editor of the JEP since the first issue in 1987.) Their overall message sounds like this:

[T]he United States spends about $100 billion per year seeking to deter, disrupt, or protect against domestic terrorism. If each saved life is valued at $14 million, it would be necessary for the counterterrorism measures to prevent or protect against between 6,000 and 7,000 terrorism deaths in the country each year, or twice that if the lower figure of $7 million for a saved life is applied. Those figures seem to be very high. The total number of people killed by terrorists within the United States is very small, and the
number killed by Islamist extremist terrorists since 9/11 is 19, or fewer than 2 per year. That is a far cry, of course, from 6,000 to 7,000 per year. A defender of the spending might argue that the number is that low primarily because of the counterterrorism efforts. Others might find that to be a very considerable stretch.

An instructive comparison might be made with the Los Angeles Police Department, which operates with a yearly budget of $1.3 billion. Considering only lives saved following the discussion above, that expenditure would be justified if the police saved some 185 lives every year when each saved life is valued at $7 million. (It makes sense to use the lower figure for the value of a saved life here, because police work is likely to have few indirect and ancillary costs: for example, a fatal car crash does not cause others to avoid driving.) At present, some 300 homicides occur each year in the city and about the same number of deaths from automobile accidents. It is certainly plausible to suggest that both of those numbers would be substantially higher without police efforts, and accordingly that local taxpayers are getting pretty good value for their money. Moreover, the police provide a great many other services (or “cobenefits”) to the community for the same expenditure, from directing traffic to arresting burglars and shoplifters.

Mueller and Stewart push for thinking about terrorism as one risk among many risks. For example, here's an table showing the risk of death from various causes over various time periods. 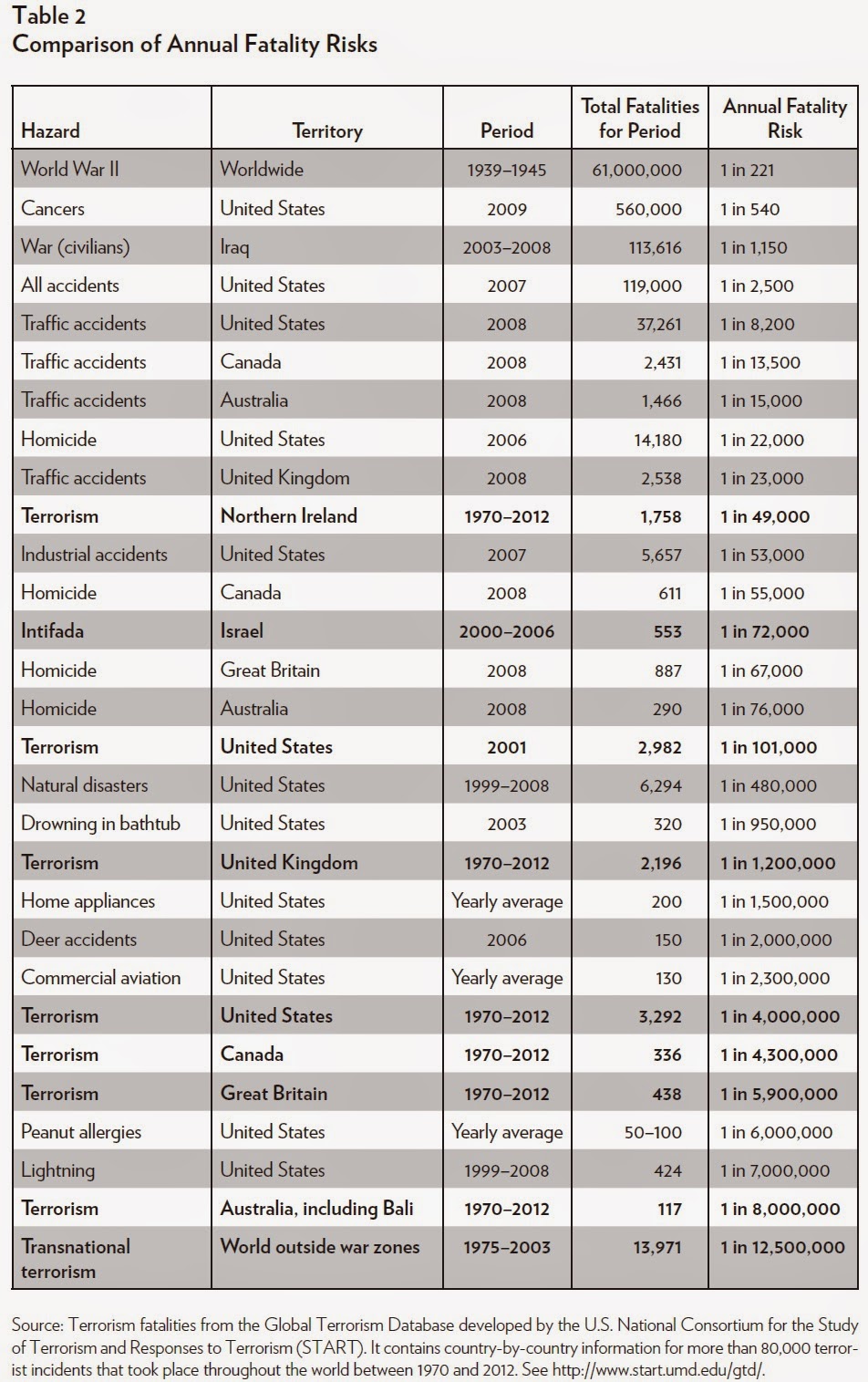 Of course, terrorism is arguably a more frightening or terrible risk than other risks, and thus one can make a plausible-if-arguable case that it's worth spending more to save 100 lives from terrorist attacks than it is worth to save 100 lives from, say cancer or industrial accidents or traffic deaths. But saying that it makes sense to spend "more" against terrorism risks is not the same as arguing that terrorism risks should get a blank check. Mueller and Stewart also offer a cost-per-life-saved chart, which mixes together estimates of the effects of a number of past regulatory actions. 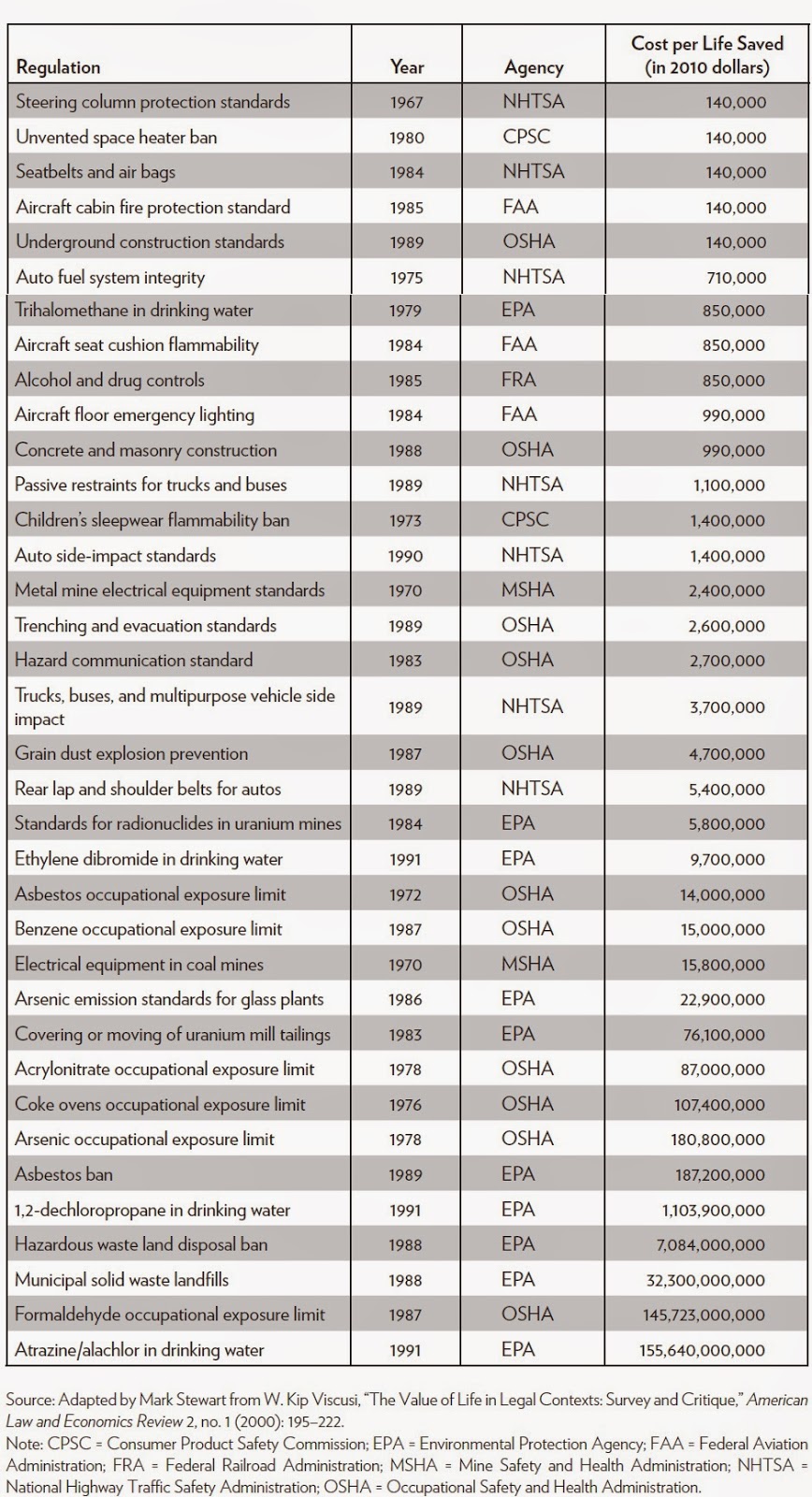 One can quarrel with the specifics of these estimates in various ways. But overall, a sensible regulatory system should be seeking out ways to do more of the kinds of items that offer higher ratios of benefits to costs, and scaling back on the items that offer lower ratios of benefits to costs. Of course, this doesn't mean that all or even most counterterrorism spending is socially undesirable. But it does mean that when thinking about counterterrorism spending, we should be on the lookout for areas where resources might be redeployed more effectively. As one concrete example, Mueller and Stewart point out, the "Transport Security Administration’s Federal Air Marshal Service and its full body scanner technology together are nearly as costly as the entire FBI counterterrorism budget, but their risk reduction over the alternatives appears to be negligible."

Indeed, the health risks of the body scanner technology may be greater than the terrorism risk they are preventing. They write:

It involves the risk that body scanners using x-ray technology will cause cancer. Asked about it, the DHS official in charge, John Pistole, essentially said that, although the cancer risk was not zero, it was acceptable. ... Since the radiation exposure delivered to each passenger is known, one can calculate the risk of getting cancer from a single exposure using a standard approach that, although controversial, is officially accepted by nuclear regulators in the United States and elsewhere. On the basis of a 2012 review of scanner safety, that cancer risk per scan is about 1 in 60 million. As it happens, the chance that an individual airline passenger will be killed by terrorists on an individual flight is much lower—1 in 90 million. ... [T]he risk of being killed by a terrorist on an airliner is already fully acceptable by the standards applied to the cancer risk from body scanners using x-ray technology. But no official has drawn that comparison.

As Mueller and Stewart point out, we have in fact eased many rules about airplane travel in recent years, without people freaking out. For example, no one any longer asks if you packed your bag yourself and have had it with you at all time. Since 2005, air passengers have (technically) been allowed to take short scissors and knives on planes. Passenger no longer need to show identification at the airplane gate. The color-coded "alert" scheme has been ended. There has been a hiring freeze on "air marshalls" since 2012. The young (under 13) and the old (over 74) no need to take off their shoes when going through screening. The PreCheck system is allowing as many as half of all flyers, including many frequent flyers, to go through airport security without taking off their belts and shoes and jackets and removing liquids and laptops from their bags.

But despite these changes, in the U.S. as a whole, our approach to counterterrorism seems to largely ignore cost-benefit analysis. Indeed, Mueller and Steward cite a 2010 report done by a panel of outside experts making this point. Other countries seem able to make different choices about counterterrorism spending.

"The United Kingdom, which faces an internal threat from terrorism that may well be greater than that for the United States, nonetheless spends proportionately much less than half as much on homeland security, and the same holds for Canada and Australia. ... It is true that few voters spend a great amount of time following the ins and outs of policy issues, and even fewer are certifiable policy wonks. But they are grownups, and it is just possible they would respond reasonably to an adult conversation about terrorism.”