A couple of recent papers from Resources for the Future tackle this question in different ways.  Sébastien Houde and Joseph E. Aldy argue that the subsidies for consumers to purchase energy-efficient appliances are not a very cost-effective approach to encouraging energy conservation in "Belt and Suspenders and More: The Incremental Impact of Energy Efficiency Subsidies in the
Presence of Existing Policy  (Discussion Paper 14-34, September 2014). A readable overview of their  results in the RFF blog is here.

However, in the most recent issue of Resources magazine from RFF, Richard Newell and Juha Siikamäki investigate, "Can Product Labels Nudge Energy Efficient Behavior?" The working paper offering the detailed analysis behind the article is available here. They find experimental evidence that what specific information is presented on the label of energy-efficient appliances can make a large difference in consumer perceptions. Let's take a quick look at these results.

Of course, those who would have bought an energy-efficient appliance even without a subsidy are likely to favor the subsidies. For them, it feels like free money and a reward for virtuous activity. But from an energy conservation point of view, subsidies going to this group are all cost and no benefit--because these people would have bought the energy-efficient appliance anyway. The only energy conservation benefit comes from those who actually switch as a result of the subsidy.

Houde and Aldy take a statistical look at data from the State Energy Efficient Appliance Rebate Program, which was part of the 2009 American Recovery and Reinvestment Act. Basically, the federal government provided money, and then states had lots of flexibility in how to create such programs--which means its possible to do comparisons when the program existed and when it didn't, and also to look at comparisons across states. They find:


We estimate that the ratio of “switchers” (individuals who switch from a non–Energy Star to an Energy Star–rated appliance as a result of the rebate) to “freeriders” (individuals claiming rebates who would have purchased an Energy Star-rated appliance even in the absence of the rebate program) is 1:10, 1:12, and 3:8, for refrigerators, clothes washers, and dishwashers, respectively. As a result, the cost per kilowatt-hour saved is on the order of about $0.25 to $1.50, depending on assumptions and appliance category. The low end of this range is four times the average cost-effectiveness of utility-sponsored energy efficiency programs.

In short, giving consumers a rebate for purchasing energy-efficient appliances isn't a cost-effective way to reduce energy use, because too much of the money goes to those who would have bought the energy efficient appliance anyway.

Newell and Siikamäki look at the labels on energy efficiency labels on water heaters. Here's the current standard EnergyGuide label: 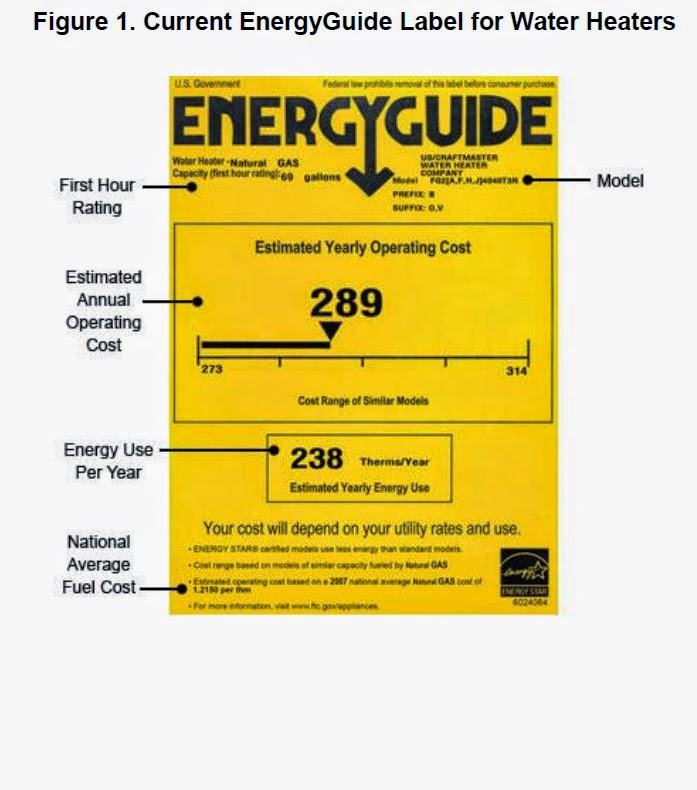 They they experiment with presenting less information, and presenting different information. They survey a group of about 1,200 households who were randomly offered different labels and prices for water heaters. For economists, the issue here is the extent to which people are willing to take long-term costs in energy savings into account when they think about purchasing an appliance. You can find specific details in the articles, but basically, the standard label did a pretty good job: on average, those who saw the label also perceived the long-run energy savings accurately.

Perhaps not surprisingly, of the various elements on the label, the basic information on yearly operating cost had the biggest effect. However, if the policy goal was to encourage even further energy conservation, Newell and Siikamäki offer a couple of options that make people pay greater attention to the energy savings: for example, one approach is to add the EnergyStar logo and label to the standard information. Another approach, commonly used in the European Union, is to offer a colorful label that shows a range of "grades" for energy efficiency, and where this appliance stands in the range. 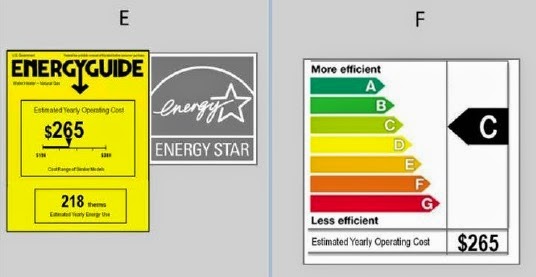 It's important to remember that the Newell and Siikamäki results are based on surveys of consumers, not on actual purchase decisions, so some further research is needed here. Still, the existing evidence strongly suggests that if the goal is greater energy efficiency for consumer appliances, the useful policy tools are setting minimum standards for energy efficiency and requiring labeling about energy efficiency that will catch the eye of potential buyers, while paying rebates to buyers of such appliances is money that could be better spent in other ways.
Posted by Timothy Taylor at 7:00 AM