My heart always sinks a bit when one my children reports over dinner that their class had a substitute teacher that day. What usually follows is a discussion of the video they watched, or the worksheet they filled out, or how many other children in the class (never mine, of course) misbehaved. How prevalent is teacher absence from classes in the U.S.? The National Council on Teacher Quality collects some evidence in its June 2014 report "Roll call: The importance
of teacher attendance.

The study collected data from 40 urban school districts across the United States for the 2012-13 school year. The definition of "absence" in this study was that a substitute teacher was used in the classroom. Thus, the overall totals mix together the times when a teacher was absent from the classroom for sickness, for other personal leave, and for some kind of professional development. As the authors of the study note: "Importantly, we looked only at short-term absences, which are absences of 1 to 10 consecutive days. Long-term absences (absences lasting more than 10 consecutive days) were not included to exclude leave taken for serious illness and maternity/paternity leave."

The average teachers across these 40 districts was absent 11 days during the school year. This amount of teacher absence matters to students. The NCTQ study cites studies to make the point: "
As common sense suggests, teacher attendance is directly related to student outcomes: the more
teachers are absent, the more their students’ achievement suffers. When teachers are absent 10 days, the decrease in student achievement is equivalent to the difference between having a brand new teacher and one with two or three years more experience."

Here's a figure showing average rates of absence across the 40 districts. Again, these include professional development activities that take teachers our of the classroom, but do not include long-term absences or parental leave. Indianapolis, the District of Columbia, Louisville, and Milwaukee lead the way with relatively few teacher absences, while Cleveland, Columbus (what's with Ohio teachers?), Nashville, and Portland have relatively high numbers of teacher absences.

Based on little more than my own gut reaction, an average of 11 teacher absences per year seems a little on the high side to me. But as with so many issues in education, the real problem doesn't lie with the averages, but with the tail end of the distribution. The study calculates that 28% of teachers are "frequently absent," meaning that they missed 11-17 days of class, and an additional 16% are "chronically absent," meaning that they missed 18 or more days of class.

Here's a city-by-city charts showing the breakdown of teacher absence by category. 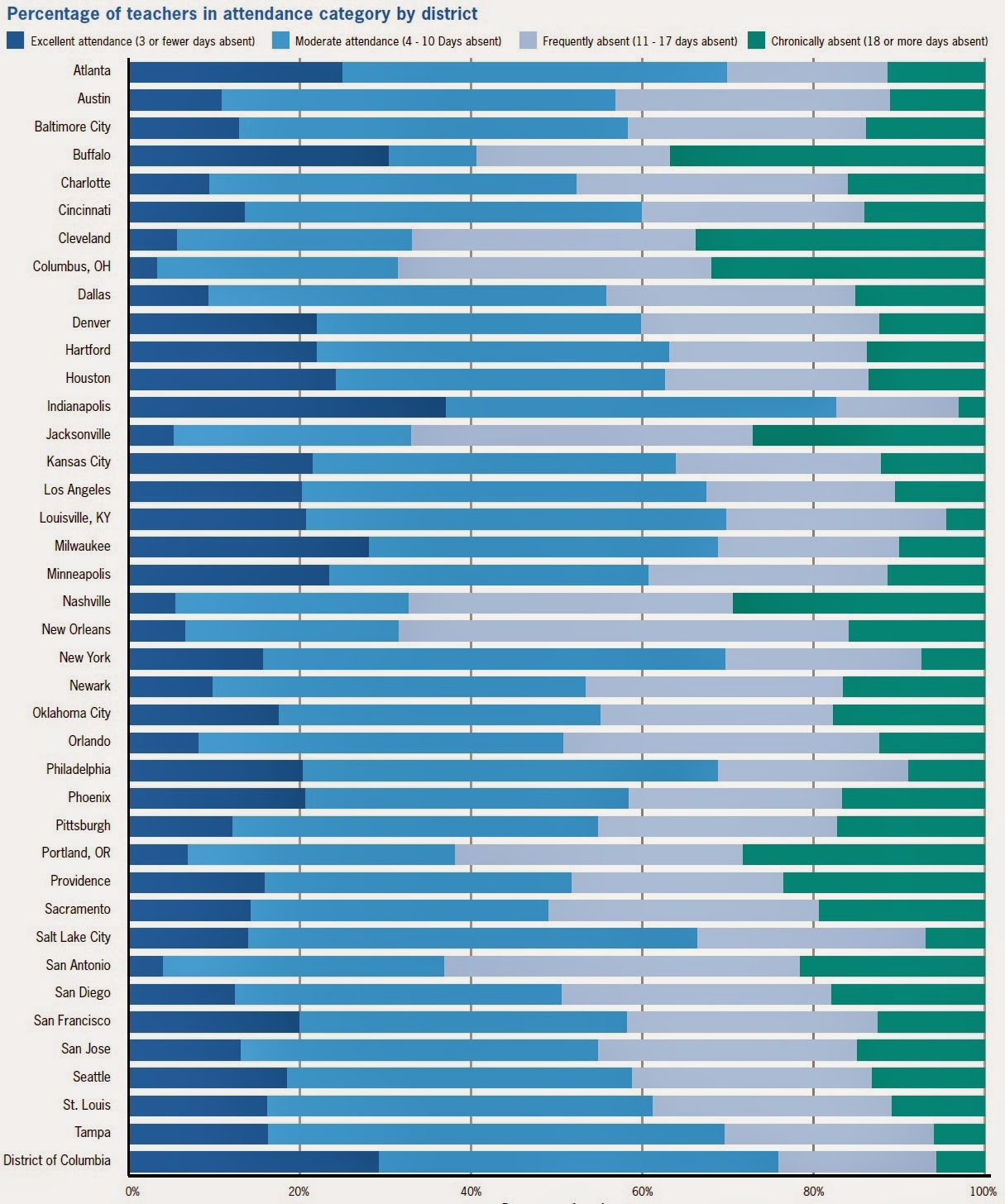 I'm willing to cut some slack to teachers who happen to have a lousy personal year and are chronically absent. But I have a hard time believing that across the United States, 1/6 of all teachers--that is, about 16%--are simultaneously having the kind of a lousy year that forces them to miss 18 or more school days. (Again, remember that these numbers don't include long-term sickness or parental leave.)  Those who can't find a way to show up for the job of classroom teacher, year after year, need to face some consequences.

A few years back in the Winter 2006 issue of the Journal of Economic Perspectives, Nazmul Chaudhury, Jeffrey Hammer, Michael Kremer, Karthik Muralidharan, and F. Halsey Rogers reported on "Missing in Action: Teacher and Health Worker Absence in Developing Countries." They wrote: "In this paper, we report results from surveys in which enumerators made unannounced visits to primary schools and health clinics in Bangladesh, Ecuador, India, Indonesia, Peru and Uganda and recorded whether they found teachers and health workers in the facilities. Averaging across the countries, about 19 percent of teachers and 35 percent of health workers were absent. The survey focused on whether providers were present in their facilities, but since many providers who were at their facilities were not working, even these figures may present too favorable a picture." The situation with U.S. teacher absence isn't directly comparable, of course. One suspect that the provision of substitute teachers is a lot better in Cleveland, Columbus, Nashville, and Portland than in Bangladesh, Ecuador, India, and Indonesia. Still, wherever it occurs, an institutional culture where many teachers don't show up needs to be confronted.
Posted by Timothy Taylor at 6:00 AM