Is Repeating a Grade a Useful Practice?

Across the high-income countries of the world, about one student in eight will have repeated a grade before reaching age 15. Does it do any good? The OECD assembles some of the evidence in "Are disadvantaged students more likely to repeat grades?" published in PISA in Focus (September 2014).
There's also a readable overview at the OECD blog here. 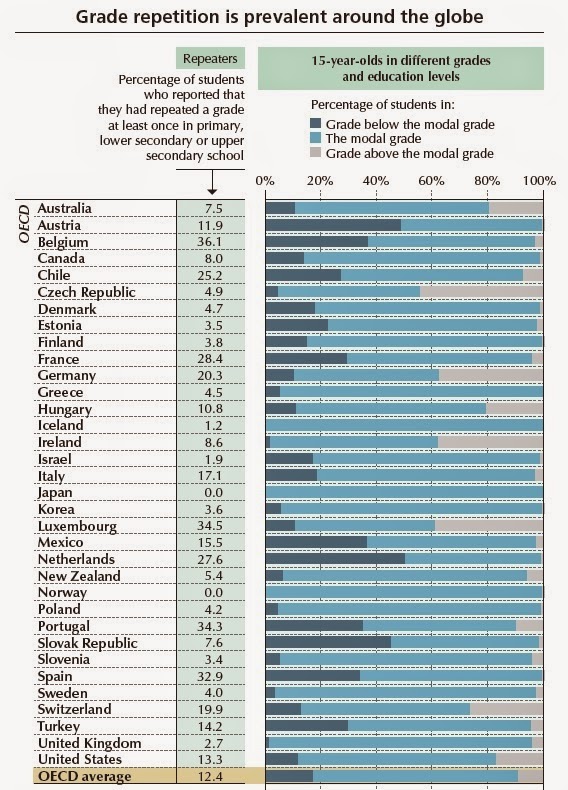 ashfdksd
The report also collects data on grade repetition for a number of other countries. What jumps out at me in particular is the prevalence of grade repetition in many Latin American countries, where the share of students who have repeated a grade is often over one-third. 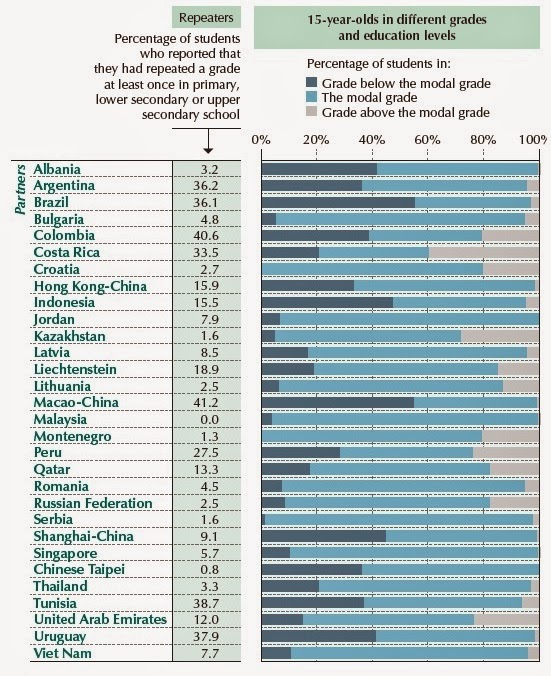 Looking across these different national experiences, what is the evidence that holding students back is an effective approach? After all, there are  a number of other ways to assist students performing below grade level, including tutoring, remedial classes, working with families, and classed that are "tracked" according to academic performance. The OECD writes:

In practice, however, grade repetition has not shown clear benefits for the students who were held back or for school systems as a whole. And grade repetition is a costly way of handling underachievement: retained students are more likely to drop out, or to stay longer in the school system and spend less time in the labour force. As a result, some countries that had used grade repetition extensively have rejected that policy in favour of more intensive early support for struggling students. Among the 13 countries and economies that had grade repetition rates of more than 20% in 2003, these rates dropped by an average of 3.5 percentage points by 2012.

Moreover, the choice of which students are held back and which students get alternative forms of help seems to be heavily influences by socioeconomic factors about the family of the student. Here's a figure showing how often students in the bottom 20% of a measure of socioeconomic status are held back a grade--after adjusting for any differences in math, reading and science test scores. (The dark green bars mean that the difference is statistically significant.) The report notes: "In Portugal and Spain, for instance, when comparing a group of disadvantaged students to an equally proficient group of advantaged students, there are three times more repeaters for every non-repeater in the disadvantaged group than in the advantaged group. On average across OECD countries, disadvantaged students are 1.5 times more likely to repeat a grade than advantaged students who perform at the same level."

Of course, none of this rules out holding back a few students, some of the time. But every time a decision is made to hold back the student, that student will then be surrounded by peers who are younger, and when everyone else his or her age is leaving school, that held-back student will have completed less school than others of the same age. Holding back students should both be more of a last resort, and also a choice made on a more equitable basis, in many countries. The OECD sums up this way:

The bottom line: Grade repetition may not only be ineffective in helping low-achieving students overcome their difficulties at school, but may also reinforce socio-economic inequities. Providing extra teaching time for students who fall behind, adapting teaching to their needs so that they can catch up with their peers, and targeting these efforts where they are most needed is a much better way of supporting students with learning difficulties or behavioural problems.