And Here Come the Interest Payments

The federal government has been on a borrowing binge since the start of the Great Recession. I've argued that in the short-run, the path of the budget deficits has been basically correct, because the deficits have helped to cushion the brutal economy of 2008-2009 and the sluggish recovery since then. But the long-term budget deficit picture is a problem.  And even those of us who have largely supported the budget deficits of the last few years need to face that fact that the bills will eventually come due, and interest payments by the federal government are likely to head sharply upward in the next few years.

For some perspective, here's a figure from the August 2014 Congressional Budget Office report, "An Update to the  Budget and  Economic Outlook:  2014 to 2024." The spending categories are expressed as a share of GDP. Thus, over the next decade Social Security and Major Health Care programs rise, and a number of other categories fall a bit. But the biggest spending jump in any of these categories is for interest payments. 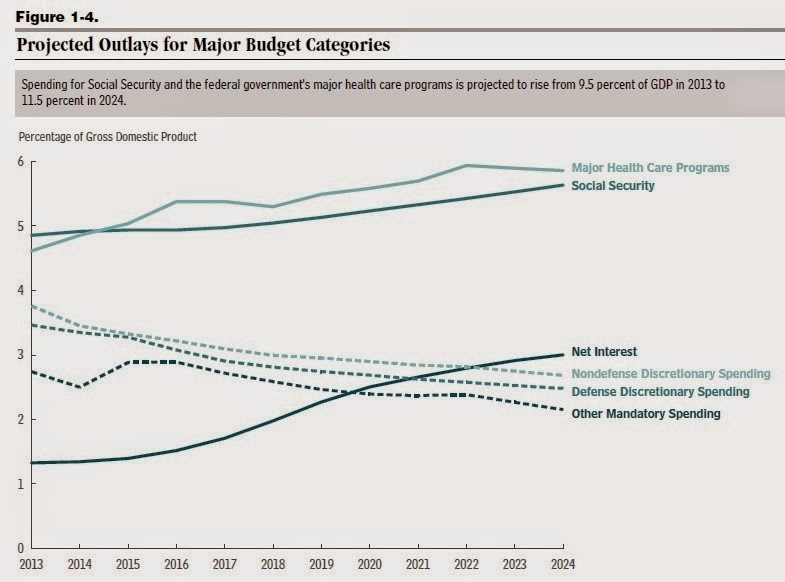 Interest payments jump for two reasons: the recent accumulation of federal debt and the expectation that interest rates are going to rise. "Between calendar years 2014 and 2019, CBO expects, the interest rate on 3-month Treasury bills will rise from 0.1 percent to 3.5 percent and the rate on 10-year Treasury notes will rise from 2.8 percent to 4.7 percent; both will remain at those levels through 2024." Of course, predictions don't always come true. But the CBO has already scaled down how much it expects interest rates to rise, and its projections of future deficits may well be on the optimistic side.

When looking at spending as a share of GDP, it's useful to remember that the GDP is now around $17 trillion. This prediction shows a rise in federal interest payments from 1.3 percent of GDP in 2014 to 3.0 percent of GDP by 2024. Converted to actual dollars, this prediction means that the projected rise in interest payments from from $231 billion in 2014 to $799 billion in 2024--more than tripling in unadjusted dollars. By 2024, that's going to be $568 billion per year that isn't available for other spending or to finance tax cuts. It's going to bite  hard.

For an historical comparison, a December 2010 CBO report looked at "Federal Debt and
Interest Costs." The light blue line shows interest payments in nominal dollars, not adjusted for inflation or the size of the economy, and thus isn't useful for looking back several decades. The dark blue line helps to illustrate rise in interest rates is headed for its highest levels since we were paying off the government borrowing of the mid-1980s at relatively high interest rates into the mid-1990s.

When economic times are dire, as they were in the U.S. economy in 2008-2009, having the government borrow money makes sense. Given the lethargic pace of the growth that followed, and the underlying financial fragility of the economy, it made some sense not to make a dramatic push for lower deficits in the last few years. But the coming surge in interest payments is a warning signal that it's past time to start thinking about how to bring down budget deficits in the middle and longer-term.