Americans, who are sometimes caricatured as being especially supportive of free trade, are actually among those most opposed. People from the low-income countries of the world, far from feeling oppressed by international trade, are often among its stronger supporters. The Pew Research Center has a new survey out--"Faith and Skepticism about Trade, Foreign Investment"--on the responses of people in 44 nations to questions about the effects and consequences of international trade. Here is a sampling of the evidence. 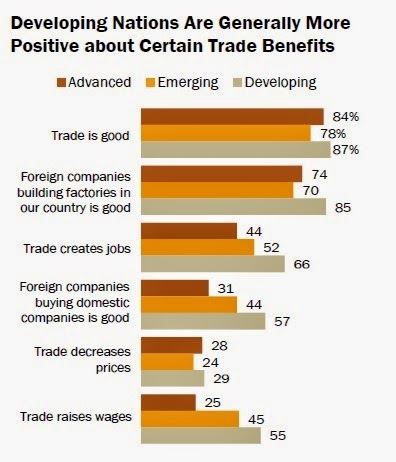 As the report notes: "Some of the greatest public skepticism about trade and foreign investment is found in the United States." Here are some examples. The U.S. is below other advanced economies, and far below the emerging and developing countries, in the share of the population who believes that trade creates jobs or raises wages. In the U.S., the share of people who see growing trade and business ties with other countries as good is lower than in regions across the world. 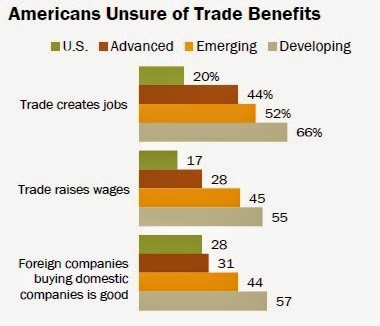 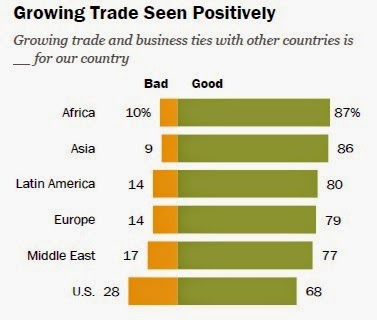 Again, this isn't just a U.S. phenomenon. In general, high-income countries across the world are more skeptical of trade than emerging and developing countries. Here's a country-by-country breakdown of the responses on whether trade with other countries helps jobs and wages.

Economists can argue all they want about the benefits and costs and trade-offs of free trade, but public opinion will play an important role in the extent to which trade can flourish.


One obvious response to these kinds of survey answers is to say something like: "Well, of course those from low-income countries are more in favor of free trade. They are the ones gaining jobs and economic growth from free trade, while high-income countries suffer."

As an economist, I believe that international trade is not a zero-sum game, but through its competition and challenges and, yes, its disruptions, trade offers overall benefits for all the nations participating. I won't argue that case here: if you want to look at some of my past blog posts on international trade issues,  you can start with posts on global supply chains (here and here), the growth of trade in services, the importance of trade within regions for economic growth, shifting patterns of global trade, the "hyperglobalization" of world trade, raising U.S. exports, and finally some discussion of international trade in iPods and in apples--the fruit.

But what I will say is that in the next few decades, the most rapid growth in the global economy is going to be happening in emerging market economies from China and east Asia, to India and south Asia, to Latin America, eastern Europe, and even Africa. Trade between these countries is going to expand as well, driven in part by political agreements but driven even more by economic opportunities, and by the falling costs of transporting value between countries--whether that value travels by container shipments and airplanes, or by way of information and communications technology. The U.S. and other high-income countries do not control this process. The practical and non-ideological question is whether the U.S. and other high-income countries find ways to hook up their economies to the growth engines of the world economy, so that their workers and standard of living can benefit from that growth, or whether that opportunity is fumbled and missed.