U.S. companies turning into foreign-controlled U.S. companies are  the news: for example, Burger King and the Canadian coffee-and-doughnuts company Tim Horton's; Medtronic and the Irish firm Covidien; or back in 2009, as part of the U.S. auto industry bailout, the autoparts maker Delphi emerged from bankruptcy, with assistance from the U.S. government, as a British-based firm.

I won't try to sort through all the tax issues involved here, but Donald J. Marples and Jane G. Gravelle offer a useful starting point in "Corporate Expatriation, Inversions, and
Mergers: Tax Issues," published on May 27, 2014 by the Congressional Research Service. But here's a sketch of the main issues.

A foreign-controlled domestic company in the U.S. still needs to pay U.S. corporate taxes on its U.S. operations at the U.S.-imposed rate, of course. But two other issues remain relevant. One is that the U.S. is the only major economy in the world that seeks to tax its companies on their global profits--not their national profits--and to do so at the relatively high U.S. corporate tax rate (although this U.S. corporate tax is postponed until the funds are sent back to the U.S,)  When a U.S. company turns into a foreign-controlled firm, it is only taxed on its U.S. operations, not on its global profits earned in other countries with lower corporate tax rates. The second issue is that companies often have ways, in how they set internal accounting prices in the company for provision of certain goods and services, and how they set up their financing, of making profits appear in one country rather than another.

How prevalent are foreign-controlled domestic corporations? James R. Hobbs provides some basic statistics in "Foreign-Controlled Domestic Corporations, 2011," in the Summer 2014 Statistics of Income Bulletin, published by the U.S. Internal Revenue Service. While this statistics give a sense of the issue, it's worth noting that Hobbs is collecting data on U.S. domestic companies that have more than 50% foreign ownership. There are also foreign companies that have a U.S. subsidiary--which isn't quite the same thing--and companies that have their legal headquarters in another country even though a majority of the business sales and the shareholders are in the U.S.

Overall, Hobbs documents that for the 2011 tax year, there were 76,793 foreign-controlled domestic
corporations that "collectively reported $4.6 trillion of receipts and $11.7 trillion of assets" to the IRS. "While Federal income tax returns for FCDCs accounted for just 1.3 percent of all United States (U.S.) corporate returns, they made up 16.2 percent of total receipts and 14.4 percent of total assets." Here's the gradual rise over the last 10 years for the share of foreign-controlled domestic corporations, relative to all U.S. corporations, in receipts, assets, and as a share of tax returns. 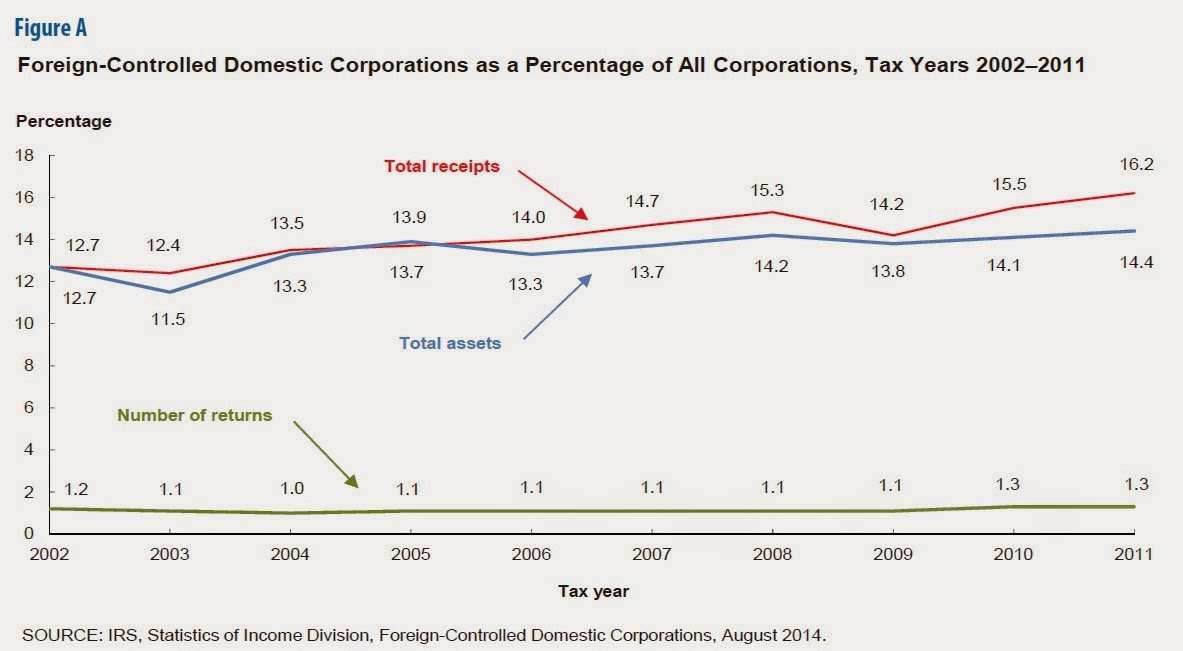 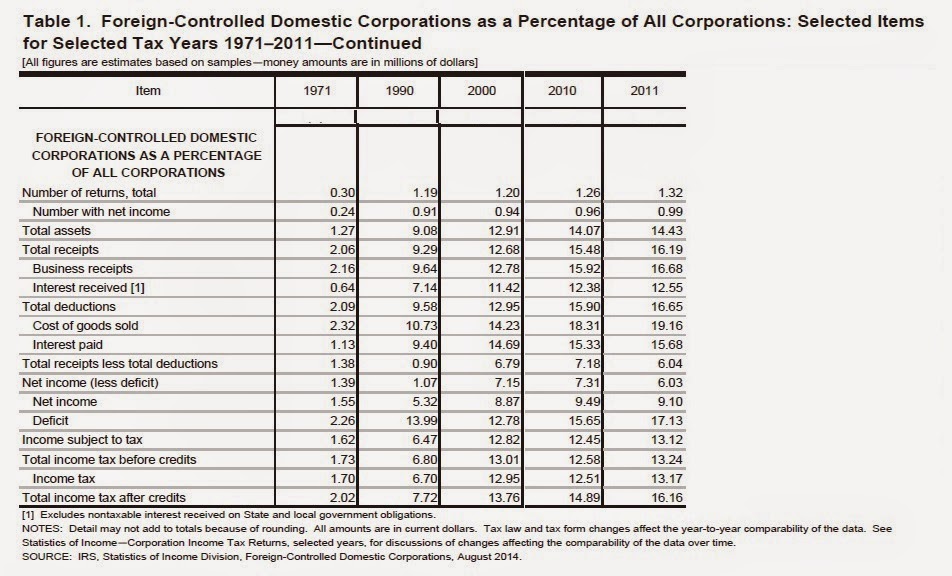 In which countries do the foreign owners of these domestic U.S. firms live? Here's a figure. You'll notice that essentially none of the foreign owners are in true tax havens like Grand Caymans or Bermuda. A law passed back in 2004 denied (or greatly restricted) any tax benefits from being based in a county where almost no actual sales or production happened. Thus, the current wave of foreign ownership is about being legally based in places like the  UK, Ireland, Canada, and so on. 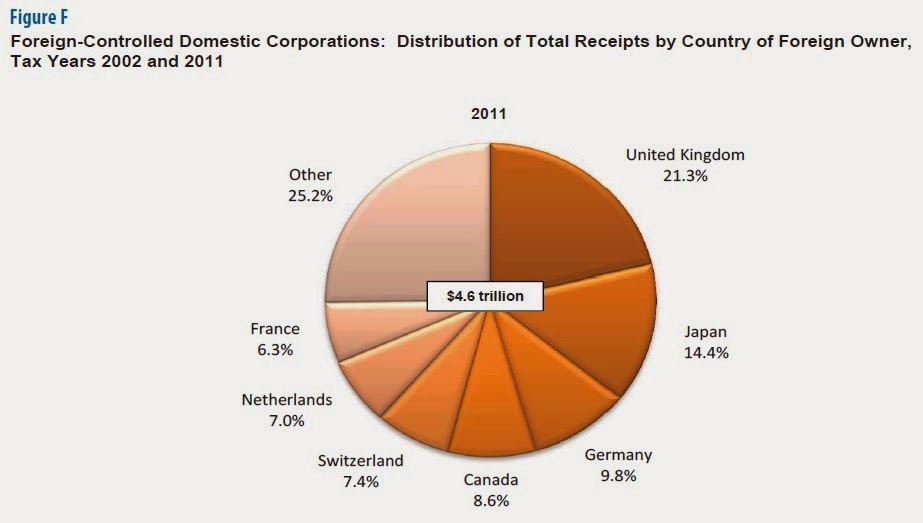 The best way to tax global corporations is a sticky problem, and I'll come back to it on this blog from time to time. In a globalizing world economy, the issues are only going to become more salient with time. But here, I'll just note that if the U.S. followed the pattern of just about every other high-income country in the world and had a corporate tax that was territorial--that is, aimed only at corporate income earned in the U.S.--the reasons for U.S. corporations to put their headquarters in another country would be much diminished.
Posted by Timothy Taylor at 6:00 AM