If you're trying to get someone to start a project with long-run payoff, it's can be useful to point out that the project also offers clear short run gains. In that spirit, there is a strong case that the world's leading emitters of carbon should be looking for ways to reduce their use of carbon-based fuel solely for the short term benefits--even before taking the risks of climate change into account. Ian Parry, Chandara Veung, and Dirk Heine make this case in "How Much Carbon Pricing is in Countries’ Own Interests? The Critical Role of Co-Benefits,"  just published as IMF Working Paper WP/14/174. Parry also offers a short and readable write-up of the results  at the IMF blog.

The main insight here is that burning fossil fuels has a variety of more immediate health costs: for example, it typically evolves emissions of sulfur oxides, nitrogen oxides, and particulate matter. In addition, there are a variety of social costs of fossil fuel use in the transportation sector, including costs of traffic congestion and accidents.

Parry, Veung, and Heine readily admit that estimates of these kinds of costs are squishy. They write: "Given the uncertainties and controversies involved in quantification (e.g., how to value health risks in different countries) these estimates are best viewed as a starting point for discussion though they are based on conservative assumptions ..." For example, these estimated additional costs of using carbon-based fuels may well be on the conservative side. As the authors point out, they do not include adjustments for the environmental costs of extracting, storing, and transporting such fuels, nor for costs of the heightened vulnerability to economic disruption that comes from reliance on these fuels. Here's a quick sketch of some of the main points in their argument.

First, here's an overview of carbon dioxide emissions for the 20 countries that are the largest emitters of carbon. The solid blue bars show total emissions: thus, China leads the way, followed by the U.S., Russia, India, and then Japan. The red diamonds show "intensity" of emissions, which is the carbon emissions relative to GDP. Here, emerging market economies where manufacturing is a bigger part of the economy and emissions standards are typically lower often look worse that higher-income countries. 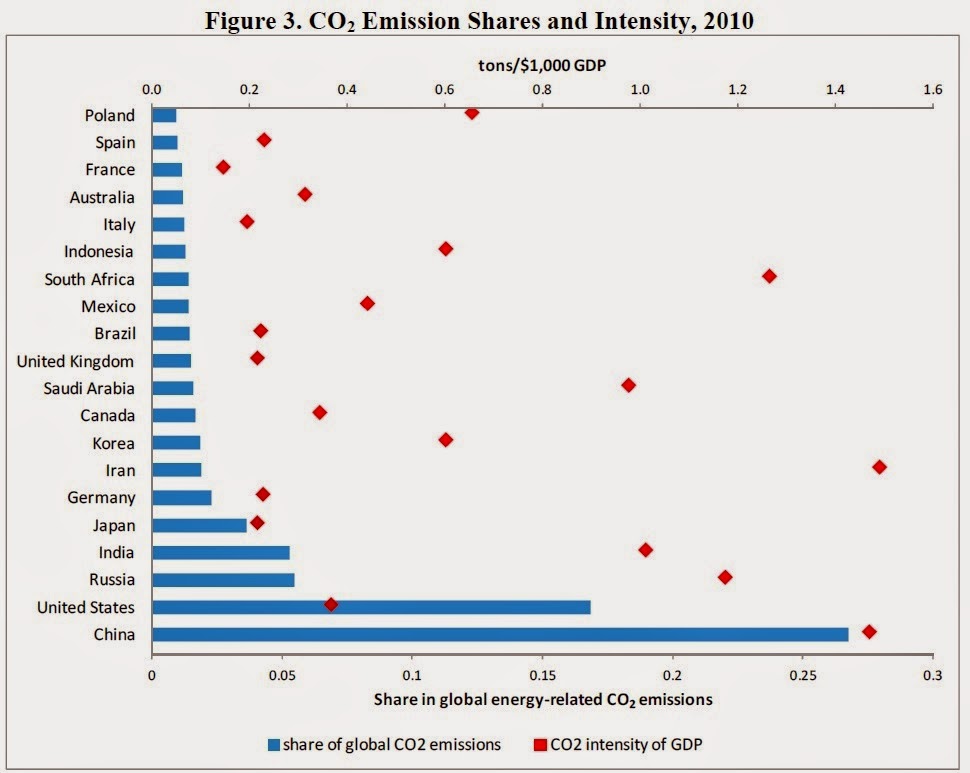 Here's a related figure showing for each country how much the main fossil fuels contribute to carbon emissions. For example, notice the very large role played by coal in China and India, the larger role for natural gas in Russia, and the relatively larger role for gasoline and diesel in the United States. Clearly, efforts to reduce carbon emissions would have different effects on fuel sources across countries. 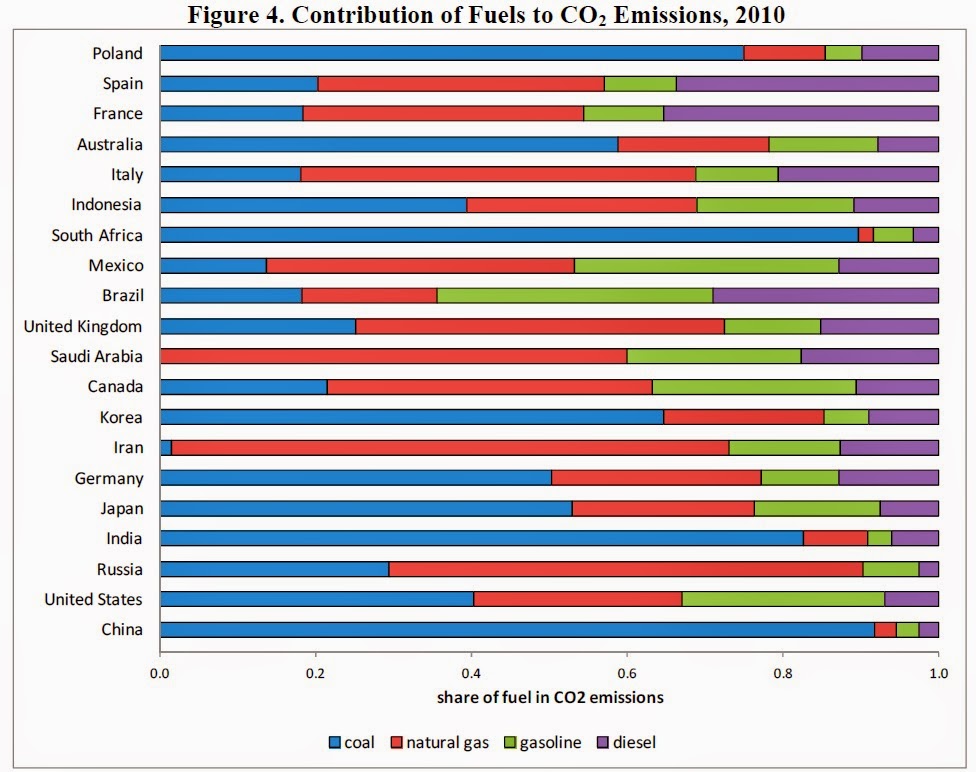 Parry, Veung, and Heine then look at the existing taxes on various carbon-based fuels, and compare them with the cost. They find that just to counterbalance with the domestic effects of the use of these fossil fuels--in economic terms, to assure that those using these fuels are paying for the true social costs imposed by these fuels--the taxes on these fuels expressed in US dollars per tons of carbon would need to be raised in the following way. (Notice that Brazil is the one country, by this measure, which already taxes fossil fuels at a level  higher than needed to offset these other social costs.) 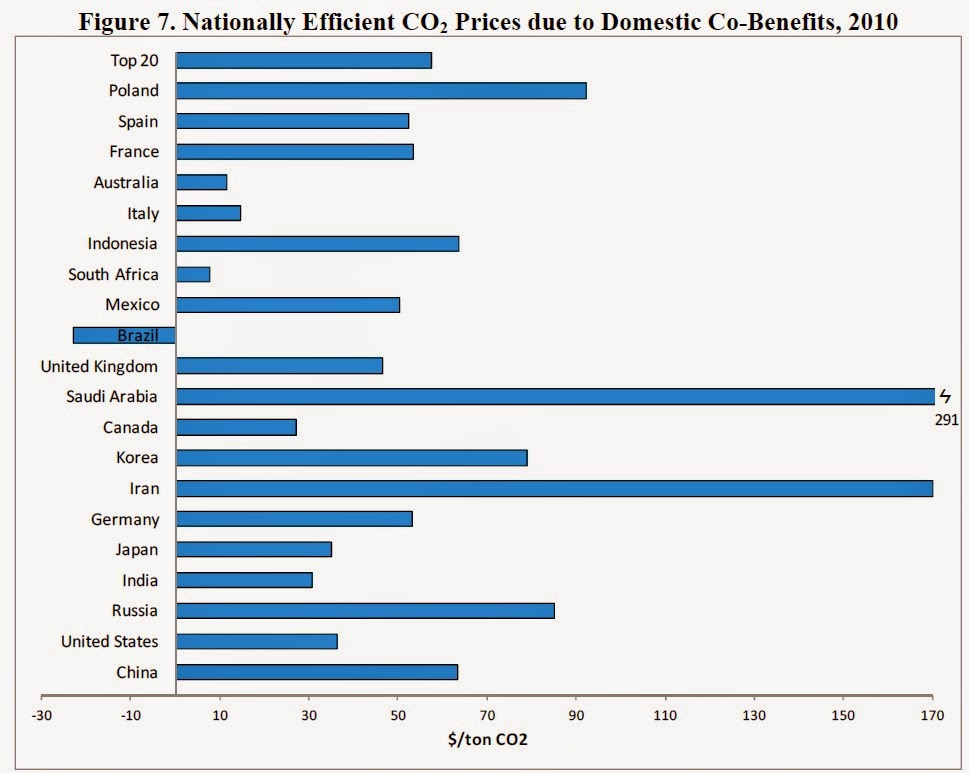 By their calculations, raising carbon taxes in this way would reduce carbon emissions as follows across countries: 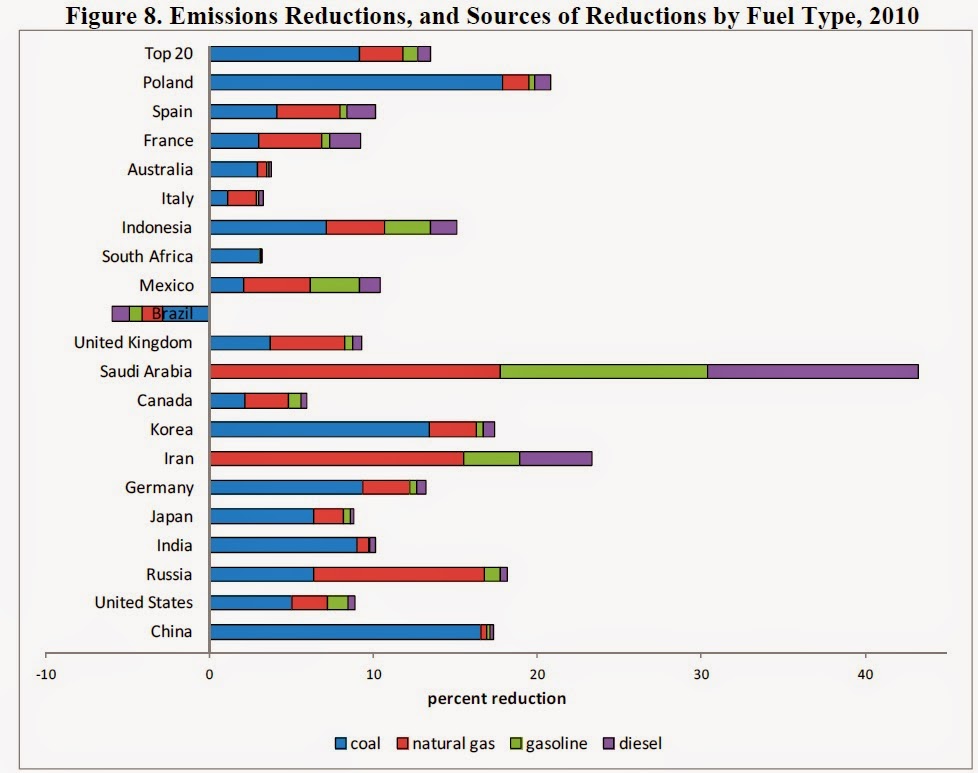 Of course, as the authors note, these kinds of estimates should not be taken as precise. But I sometimes worry that with all the attention paid to climate change issues, pro and con, the old-fashioned problem of reducing conventional air pollutants gets too little attention. I'll add that carbon is not the only greenhouse gas, nor is it the only emission where the argument based on co-benefits is worth attention. For example, soot and methane are also air pollution problems that are implicated in climate change, but where reducing them would have also have immediate health effects. Other studies have shown that the costs of air pollution in the U.S. are high even without taking long-term climate change issues into account. The costs of air pollution and other environmental hazards in China are very large. The World Health Organization reports that air pollution is overall the world's biggest health hazard, although only  part of this is related to the energy sources that raise the risks of climate change.

Those who are most deeply concerned about climate change may raise concerns that focusing on domestic gains from reducing air pollution will not ultimately be enough, and that efforts to reduce carbon emissions to address climate change must go further. But the immediate issue is not what air pollution policies may need to be adopted in 2030 or 2060. If the case for reducing the use of carbon-based energy can be made right now, in terms of immediate health benefits, then that seems a useful starting point for discussion.