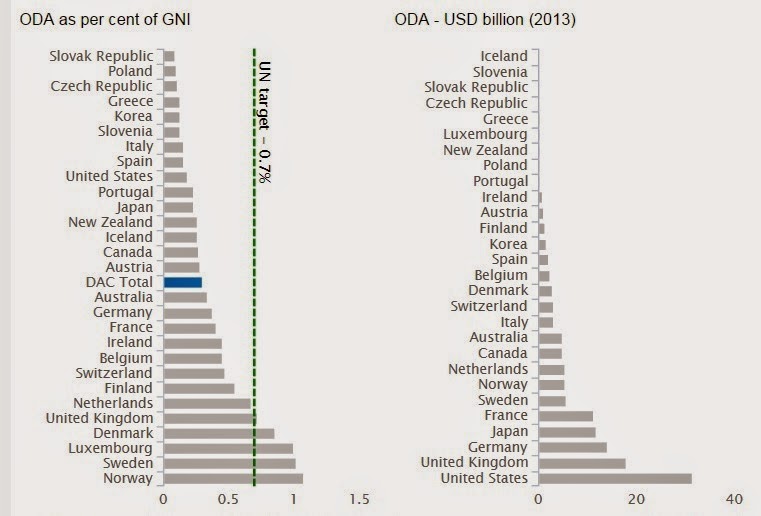 One can argue that foreign aid should be higher. The OECD some years ago set a target that high-income countries should try to give 0,7% of GDP in foreign aid, but few countries meet that target, and the average (as a share of GDP) is about half that amount. 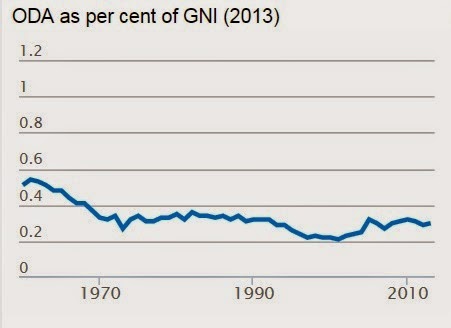 But a bigger problem for foreign aid is suggested by long division: Take $134.9 billion in aid and divide it by 2.4 billion people consuming less than $2 per day, and it works out to about $56 per person. Even if effectively administered and invested, that amount of aid isn't going to budge the needle on global poverty by very much.

Thus, it's natural to ask what high-income countries might do, other than tweaking their foreign aid budgets, to help the world's poor. A committee in the UK House of Commons is apparently seeking to compile a policy agenda along these lines. Owen Barder and Theodore Talbot of the Center for Global Development drew up a memo for the House of Commons committee. The memo is here; a blog post about the issue at the CGD website is here. Here's a sampling of their policy proposals to help the world's poor that go beyond the foreign aid budget (with many citations omitted for readability).

"Laborde et al. (2013) study the possible impact of the on-going WTO Doha Round
negotiations and find real income gains to low- and lower middle- income countries
of between £28.5 billion to £37.6 billion a year just from lower tariff barriers in rich
countries. ... [The US] Congress signed the African Growth and Opportunity Act
(AGOA) into law in May 2000. Frazer and van Biesebroeck find a resulting increase
in exports from eligible African countries of around £299 million a year."

"Data from 2007 shows that twenty-five of the forty-four countries in sub-Saharan Africa were experiencing crippling power shortages. Power cuts reduce annual growth rates of the worst hit African economies by over 2%. Transport is also a serious problem. ... [T]he annual funding shortfall for low- and lower middle-income African countries is estimated at nearly £27 billion per year to overcome the current infrastructure gap within a 10-year period. For developing South Asia, Andrés et al. (2013) estimate a £1.4 trillion dollar infrastructure gap over the next decade. ... Tackling illicit financial flows (IFFs) could help governments in poor countries meet more of their own needs. These flows include tax evasion (like firms underreporting export values to lower their tax bills), theft of public assets and related corruption, the laundering of the proceeds of crime (like drug sales), and a range of market and regulatory abuses under cover of anonymity (like hidden connections between politicians regulating an industry and the industry itself). Illicit flows, by their nature, are difficult to measure, but all studies put total costs in the billions annually. According to one estimate, twenty Sub-Saharan African lost an estimated 10% or more of their cumulative GDP produced between 1980 and 2009 to these outflows.


"About 60% of global income inequality can be explained simply by which country people live in: one of the most effective ways to raise incomes of poor people would be to allow more people to choose what country to work or reside in (even temporarily). ...  Research on the US labour market by the Center for Global Development (CGD) shows that workers from Paraguay or Turkey, for example, could triple their monthly wages, while workers from poorer countries like Cambodia or Ghana could earn nine times more purely by working in the United States. By contrast, there is no aid-funded project that would raise a workers income from £60 to £540 per month. Furthermore, migration, unlike aid, directly adds value to rich countries’ economies."

"The fisheries sector of African countries was worth more than £10.6 billion in 2011, equivalent to over 6% of African agricultural GDP, and net fisheries exports from all developing countries reached £21.4 billion in 2012. However, two thirds of the North Atlantic fish stocks and 82% of Mediterranean stocks are overfished. Fisheries can be a renewable resource only if they are carefully managed. ... Despite the catastrophic risks to fish stocks of overfishing, the EU continues to subsidise engine replacement for vessels larger than 24 meters while half of the EU’s distant-water fleet makes its own arrangement with third countries. Weak government capacity in developing countries increases the chance of fishing past sustainable yields."


"Tighter controls on intellectual property ... are part of the reason that developing countries have not been able to close the gap on industrialised countries. Facilitating private investment is an important piece of this puzzle. Foreign firms that operate overseas increase the productivity of their suppliers and customers, train workers who can then migrate to other firms in the same sector with new skills, and demonstrate models that other firms can copy. Rich countries can also make the global pool of knowledge available to poor countries by targeted improvements in their intellectual property rights (IPR) regimes for developing countries."

Reducing the chance of war

"Conflict and insecurity have appalling human costs. In addition they also have longer-run effects on economic growth by destroying productive capital and reducing the incentives for firms and households to invest. Collier (1999) estimates that countries in civil war experience a decline in growth of 2.2 percentage points, and other estimates are significantly higher. ...  The UK requires an approved export permit for arms sales or exports of technologies, like cryptographic equipment, that have a dual civilian and military use. Despite this safeguard, a report by the Committees on Arms Export Controls (2013) found 3,375 arms export licenses worth nearly £12 billion to countries on the Foreign and Commonwealth Office’s (FCO) list of countries of human rights concern, including Iran, Russia, Sri, Lanka, Belarus and Zimbabwe. In the same period, the government rejected 148 applications (1% of approvals). ...  Peacekeeping missions are a cost-effective contribution to promoting stability overseas."


Of course, people will differ on which options are likely to be have the biggest effects for the world's poor and which options are politically feasible in high-income countries. But if you think that alleviating global poverty is a worthwhile policy goal, some combination of the items on this list can have an effect that is a hefty multiple of what foreign aid is able to achieve.