For several decades, the number of turkey hatcheries has declined steadily. During the last six years, however, this decrease began to slow down. As of 2013, there are 54 turkey hatcheries in the United States, down from 58 in 2008, but up from the historical low of 49 reached in 2012. The total capacity of these facilities remained steady during this period at approximately 39.4 million eggs. The average capacity per hatchery reached a record high in 2012. During 2013, average capacity per hatchery was 730 thousand (data records are available from 1965 to present).


U.S. agriculture is full of examples of remarkable increases in yields over a few decades, but they always drop my jaw. I tend to think of a "turkey" as a product that doesn't have a lot of opportunity for technological development, but clearly I'm wrong. Here's a graph showing the rise in size of turkeys over time from the 2007 report.

The production of turkey remains an industry that is not very concentrated, with three relatively large producers and then more than a dozen mid-sized producers. Here's a list of top turkey producers in 2014 from the National Turkey Federation: 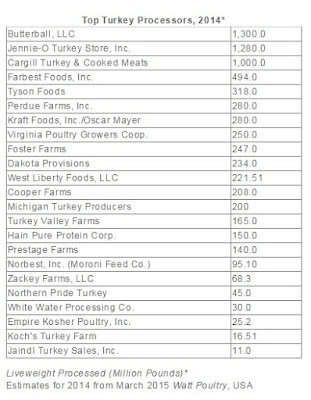 In the last couple of years, the US turkey industry has been affected by an outbreak of HPAI
(Highly Pathogenic Avian Influenza). In the November 17, 2015 issue of the "Livestock, Dairy, andPoultry Outlook" from the US Department of Agriculture, Kenneth Mathews and Mildred Haley offer some details.


U.S. turkey meat production in third-quarter 2015 was 1.35 billion pounds, down 9 percent from a year earlier. This continued the downward path for turkey production in 2015 ... The third-quarter decline was due to both a lower number of turkeys slaughtered and a drop in their average live weight at slaughter. The slaughter number fell to 57.5 million, 6 percent lower than a year earlier, while the average live weight at slaughter declined to 29.3 pounds, a drop of 3 percent from the previous year. Since April the average live weight at slaughter has been lower than the previous year, for a period of 6 consecutive months—reflecting the impact of the HPAI outbreak, which caused processors to slaughter birds somewhat earlier than they normally would in order to maintain supply levels. ... Lower turkey meat production during third-quarter 2015 helped to lower overall turkey stocks, which, in turn, put upward pressure on whole bird prices. ... Turkey meat production in 2016 is forecast at 6 billion pounds, which would be an increase of 8 percent from the HPAI-reduced production of the previous year; much of the increase will come in the second half of the year. ... Prices for whole frozen hen turkeys at the wholesale level averaged $1.36 per pound in October, up from $1.16 per pound the previous year (17 percent). ... The quarterly price for frozen whole hens in 2016 is forecast higher through the first half of the year, but then to average below year-earlier levels in the second half, as higher production mitigates traditional seasonal price increases.


For some reason, this entire post is reminding me of the old line that if you want to have free-flowing and cordial conversation at dinner party, never seat two economists beside each other. Did I mention that I make an excellent chestnut stuffing? 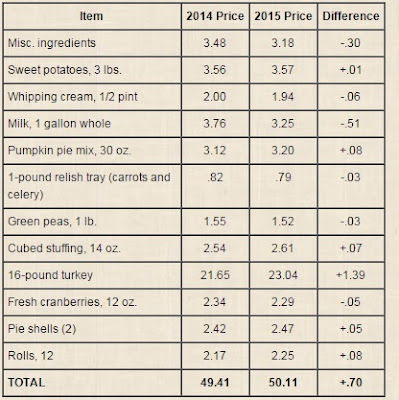 Thanksgiving is a distinctively American holiday, and it's my favorite. Good food, good company, no presents--and all these good topics for conversation. What's not to like?