Snapshots of Well-Being Across High-Income Countries

Well-being is a multidimensional concept, for countries as well as for individuals. Thus, in the recent OECD report  "How's Life 2015: Measuring Well-Being," the emphasis goes well beyond basic one-dimensional measures of well-being like per capita GDP and offers comparisons across a range of measures of well being for the countries that are members of the OECD.

The OECD membership includes 34 countries. It  includes the US and Canada, many countries across western and eastern Europe, Japan and Australia, and a few others additions like Korea, Israel, Mexico, and Chile. Thus, it would be fair to say that it includes mostly the high-income countries of the world. The OECD is a combination think-tank and forum: it collects a wide range of data and publishes reports, but it has no power beyond its own reputation for accuracy and even-handedness.

So when you read these charts for various countries, they are basically telling you if a country is pretty close to the average for the high-income countries of the world, or whether it really stands out from the average.

Here's what the US looks like in this framework.. For household income and financial wealth, the US is an extreme outlier in comparison to the OECD peer group with values above 2. The US also stands out in earnings, rooms per person, housing affordability, educational attainment, and perceived health. However, the US stands out in a negative way in categories like time off, adult skills, and deaths due to assault. 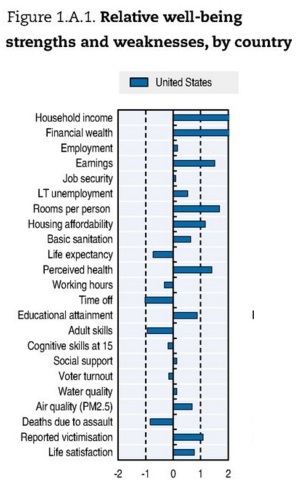 How do these configurations appear for some other prominent OECD economies? In some ways, the US stands out as a country of fairly extreme values, both positive and negative. In contrast, Germany in comparison to the other OECD countries stands out on household income (although clearly well below the US level) as well as employment, job security, and water quality. Germany has a number of other above-average categories, and no categories that are dramatically below the average. 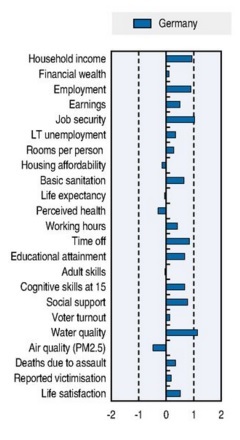 What about Japan? Japan is high on financial wealth but about average on income--on those two categories the opposite of Germany's pattern. Japan is especially high in job security, life expectancy, cognitive skills at 15, and adult skills. Japan performs poorly in perceived health (which is quirky, given the life expectancy numbers) as well as in basic sanitation, voter turnout, and life satisfaction 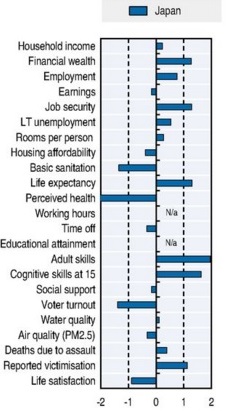 The chart for France made me smile. Overall France is even closer to the OECD average on most of these measures that Germany. France stands out a bit on household income, voter turnout, and life expectancy. But by these measures, the most striking difference for France is the large amount of time off! 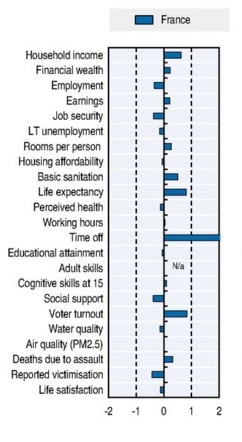 The standard of living in Scandinavian countries like Sweden and Denmark has been getting some attention lately in US political conversations. Here's the snapshot for Sweden. Again, Sweden is closer to the average for the 34 OECD countries than the US measures, but it especially stands out in employment, perceived health, working hours, and water and air quality. It's interesting to me that while the US is roughly average on cognitive skills at age 15 but substantially below-average on adult skills, Sweden is a little behind on cognitive skills at age 15 and substantially  ahead on adult skills. This pattern suggests that Sweden knows something about helping young adults acquire skills as they move into the workforce. It's also interesting that Sweden is a little below average on job security, a little above average on long-term unemployment, and average on time off. 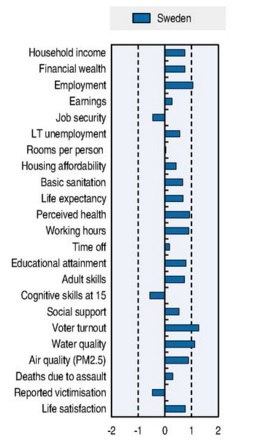 Finally, if you want a picture of a society in trouble, consider the graph for Greece. Compared to the OECD average, Greece lags dramatically in employment, earnings, job security, long-term unemployment rooms per person, housing affordability, cognitive skills at 15, social support, water quality, and life satisfaction. 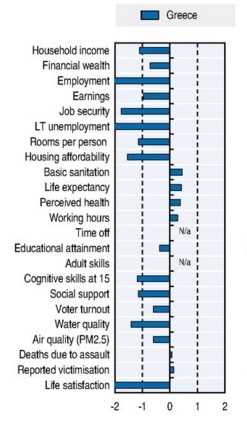