Since 1986, my actual paid job (as opposed to my blogging hobby) has been Managing Editor of the Journal of Economic Perspectives. The journal is published by the American Economic Association, which about four years ago made the decision--much to my delight--that the journal would be freely available on-line, from the current issue back to the first issue in 1987. The journal's website is here. I'll start here with Table of Contents for the just-released Fall 2015 issue. Below are abstracts and direct links for all of the papers. I will probably blog about some of the individual papers in the next week or two, as well. 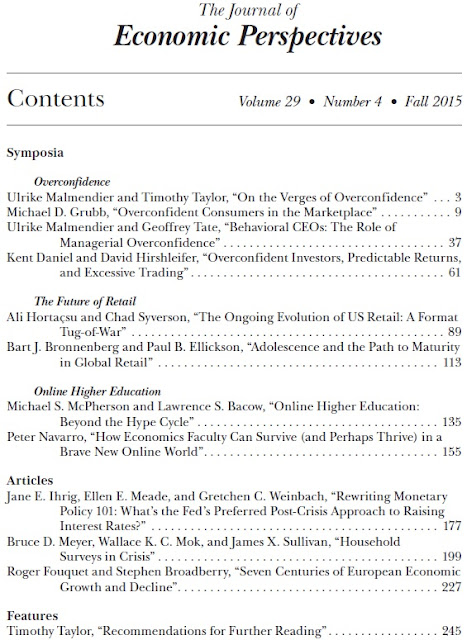 Here are abstract and links to the articles.

"On the Verges of Overconfidence," by Ulrike Malmendier and Timothy Taylor
This symposium provides several examples of overconfidence in certain economic contexts. Michael Grubb looks at "Overconfident Consumers in the Marketplace." Ulrike Malmendier and Geoffrey Tate consider "Behavioral CEOs: The Role of Managerial Overconfidence." Kent Daniel and David Hirshleifer discuss "Overconfident Investors, Predictable Returns, and Excessive Trading." A number of insights and lessons emerge for our understanding of markets, public policy, and welfare. How do firms take advantage of consumer overconfidence? Might government attempts to rule out such practices end up providing benefits to some consumers but imposing costs on others? How are empirical measures of CEO overconfidence related to investment and the capital structure of firms? Can overconfidence among at least some investors help to explain prominent anomalies in stock markets like high levels of trading volume and certain predictable patterns in stock market returns?
Full-Text Access | Supplementary Materials

"Overconfident Consumers in the Marketplace," by Michael D. Grubb
The term overconfidence is used broadly in the psychology literature, referring to both overoptimism and overprecision. Overoptimistic individuals overestimate their own abilities or prospects. In contrast, overprecise individuals place overly narrow confidence intervals around forecasts, thereby underestimating uncertainty. These biases can lead consumers to misforecast their future product usage, or to overestimate their abilities to navigate contract terms. In consequence, consumer overconfidence causes consumers to systematically misweight different dimensions of product quality and price. Poor choices based on biased estimates of a product's expected costs or benefits are the result. For instance, overoptimism about self-control is a leading explanation for why individuals overpay for gym memberships that they underutilize. Similarly, overprecision is a leading explanation for why individuals systematically choose the wrong calling plans, racking up large overage charges for exceeding usage allowances in the process. Beyond these market effects of overconfidence, this paper addresses three additional questions: What will firms do to exploit consumer overconfidence? What are the equilibrium welfare consequences of consumer overconfidence for consumers, firms, and society? And what are the implications of consumer overconfidence for public policy?
Full-Text Access | Supplementary Materials

"Behavioral CEOs: The Role of Managerial Overconfidence," by Ulrike Malmendier and Geoffrey Tate
In this paper, we provide a theoretical and empirical framework that allows us to synthesize and assess the burgeoning literature on CEO overconfidence. We also provide novel empirical evidence that overconfidence matters for corporate investment decisions in a framework that explicitly addresses the endogeneity of firms' financing constraints.
Full-Text Access | Supplementary Materials


"Overconfident Investors, Predictable Returns, and Excessive Trading," by Kent Daniel and David Hirshleifer
The last several decades have witnessed a shift away from a fully rational paradigm of financial markets toward one in which investor behavior is influenced by psychological biases. Two principal factors have contributed to this evolution: a body of evidence showing how psychological bias affects the behavior of economic actors; and an accumulation of evidence that is hard to reconcile with fully rational models of security market trading volumes and returns. In particular, asset markets exhibit trading volumes that are high, with individuals and asset managers trading aggressively, even when such trading results in high risk and low net returns. Moreover, asset prices display patterns of predictability that are difficult to reconcile with rational expectations-based theories of price formation. In this paper, we discuss the role of overconfidence as an explanation for these patterns.
Full-Text Access | Supplementary Materials

Symposium on the Future of Retail

"The Ongoing Evolution of US Retail: A Format Tug-of-War," by Ali Hortaçsu and Chad Syverson
The past 15-20 years have seen substantial and visible changes in the way US retail business is conducted. Explanations about what is happening in the retail sector have been dominated by two powerful and not fully consistent narratives: a prediction that retail sales will migrate online and physical retail will be virtually extinguished, and a prediction that future shoppers will almost all be heading to giant physical stores like warehouse clubs and supercenters. Although online retail will surely continue to be a force shaping the sector going forward and may yet emerge as the dominant mode of commerce in the retail sector in the United States, its time for supremacy has not yet arrived. We discuss evidence indicating that the warehouse clubs/supercenter format has had a greater effect on the shape of retail over the past 15-20 years We begin with an overview of the retail sector as a whole, which over the long term has been shrinking as a share of total US economic activity and in terms of relative employment share. The retail sector has experienced stronger-than average productivity growth, but this has not been accompanied by commensurate wage growth. After discussing the important e-commerce and warehouse clubs/supercenters segments, we look more broadly at changes across the structure of the retail sector, including scale, concentration, dynamism, and degree of urbanization. Finally, we consider the likely future course of the retail sector.
Full-Text Access | Supplementary Materials


"Adolescence and the Path to Maturity in Global Retail," Bart J. Bronnenberg and Paul B. Ellickson
We argue that, over the past several decades, the adoption and diffusion of "modern retailing technology" represents a substantial advance in productivity, providing greater product variety, enhanced convenience, and lower prices. We first describe modern retailing, highlighting the role of modern formats, scale (often transcending national boundaries), and increased coordination with upstream and downstream partners in production and distribution. In developed markets, the transition to modern retailing is nearly complete. In contrast, many low-income and emerging markets continue to rely on traditional retail formats, that is, a collection of independent stores and open air markets supplied by small-scale wholesalers, although modern retail has begun to spread to these markets as well. E-commerce is a notable exception: the penetration of e-commerce in China and several developing nations in Asia has already surpassed that of high-income countries for some types of consumer goods. To understand the forces governing the adoption of modern technology and the unique role of e-commerce, we propose a framework that emphasizes the importance of scale and coordination in facilitating the transition from traditional to modern retailing. We conclude with some conjectures regarding the likely impact of increased retail modernization for the developing world.
Full-Text Access | Supplementary Materials


"How Economics Faculty Can Survive (and Perhaps Thrive) in a Brave New Online World," by Peter Navarro
The academy in which we toil is moving rapidly towards a greater role for online delivery of higher education, and both fans and skeptics offer strong reasons to believe this technological shock will have substantial disruptive effects on faculty. How can we as economic educators continue to provide sufficient value-added to justify our role in a world where much of what we now do is effectively being automated and commoditized? In this brave new online world, many successful and resilient faculty will add value (and differentiate their product) not by producing costly and elaborate multimedia lectures in which they become a superstar professor-celebrity, but rather through careful, clever, and innovative choices regarding both the adoption of the online content of other providers and the forms of online interactions they integrate into their course designs. Possible forms of faculty-to-student and student-to-student interactions run the digital gamut from discussion boards and electronic testing to peer assessments, games and simulations, and virtual office hours. This article explores basic descriptive and prescriptive questions economic educators and their administrators are likely to face as the online education tide rises. For example, how much does it cost to develop online content and how much time does it take? What are the key "ingredients" for a pedagogically sound online course? Throughout, I will draw on both the extant literature as well as my own experience at the University of California, Irvine, where the online evolution is advancing rapidly. [This article is available for download in audio (MP3) format from the journal website.]
Full-Text Access | Supplementary Materials

"Rewriting Monetary Policy 101: What's the Fed's Preferred Post-Crisis Approach to Raising Interest Rates?" by Jane E. Ihrig, Ellen E. Meade and Gretchen C. Weinbach
For many years prior to the global financial crisis, the Federal Open Market Committee set a target for the federal funds rate and achieved that target through small purchases and sales of securities in the open market. In the aftermath of the financial crisis, with a superabundant level of reserve balances in the banking system having been created as a result of the Federal Reserve's large-scale asset purchase programs, this approach to implementing monetary policy will no longer work. This paper provides a primer on the Fed's implementation of monetary policy. We use the standard textbook model to illustrate why the approach used by the Federal Reserve before the financial crisis to keep the federal funds rate near the Federal Open Market Committee's target will not work in current circumstances, and explain the approach that the Committee intends to use instead when it decides to begin raising short-term interest rates.
Full-Text Access | Supplementary Materials


"Household Surveys in Crisis," by Bruce D. Meyer, Wallace K. C. Mok and James X. Sullivan
Household surveys, one of the main innovations in social science research of the last century, are threatened by declining accuracy due to reduced cooperation of respondents. While many indicators of survey quality have steadily declined in recent decades, the literature has largely emphasized rising nonresponse rates rather than other potentially more important dimensions to the problem. We divide the problem into rising rates of nonresponse, imputation, and measurement error, documenting the rise in each of these threats to survey quality over the past three decades. A fundamental problem in assessing biases due to these problems in surveys is the lack of a benchmark or measure of truth, leading us to focus on the accuracy of the reporting of government transfers. We provide evidence from aggregate measures of transfer reporting as well as linked microdata. We discuss the relative importance of misreporting of program receipt and conditional amounts of benefits received, as well as some of the conjectured reasons for declining cooperation and for survey errors. We end by discussing ways to reduce the impact of the problem including the increased use of administrative data and the possibilities for combining administrative and survey data.
Full-Text Access | Supplementary Materials


"Seven Centuries of European Economic Growth and Decline," by Roger Fouquet and Stephen Broadberry
This paper investigates very long-run preindustrial economic development. New annual GDP per capita data for six European countries over the last seven hundred years paint a clearer picture of the history of European economic development. We confirm that sustained growth has been a recent phenomenon, but reject the argument that there was no long-run growth in living standards before the Industrial Revolution. Instead, the evidence demonstrates the existence of numerous periods of economic growth before the nineteenth century—periods of unsustained, but raising GDP per capita. We also show that many of the economies experienced substantial economic decline. Thus, rather than being stagnant, pre-nineteenth century European economies experienced a great deal of change. Finally, we offer some evidence that, from the nineteenth century, these economies increased the likelihood of being in a phase of economic growth and reduced the risk of being in a phase of economic decline.
Full-Text Access | Supplementary Materials