Why More Humanitarian Aid Should be Given in Cash

My mental image of humanitarian relief workers after a crisis is people who are unloading and handing out supplies. But for some purposes and in some cases,  handing out cash might work better. That's the case made in the "Report of the High Level Panel on Humanitarian Cash Transfers," called "Doing Cash Differently: How Cash Transfers Can Transform Humanitarian Aid" (published in September 2015 by the Center for Global Development). The panel includes a selection of academics, representatives from humanitarian relief organizations, and organizations with experience transferring money into low-income countries. I'll list the membership of the group at the bottom of this post.

Let me start by sketching the challenge of humanitarian aid.

"However, this system is under great and growing strain. The 2015 State of the Humanitarian System report concludes that international humanitarian action is at the ‘wrong scale and is structurally deficient to meet the multiple demands that have been placed upon it’. 2014 was an exceedingly difficult year, with simultaneous large-scale disasters in South Sudan, the Central African Republic, Syria and the Philippines, and in West Africa with the Ebola outbreak. ...  In 2014 there were nearly 60 million people around the world who had been displaced by conflict. Natural disasters affect on average 218 million people a year. Conflict in the Central African Republic has touched more than half its population. Almost 12 million people have been forced to flee their homes in Syria."

The Panel estimates that at present about 5-6% of humanitarian aid is distributed in the form of cash payments. "If sectors where cash is often less appropriate (health, water and sanitation) and not appropriate at all (mine action, coordination, security) are removed from the equation, then cash and vouchers were roughly 10% of the total."

It may seem counterintuitive to think of money as an answer to humanitarian crises. After all, isn't it obvious that the in such a crisis, the problem is a shortage of food, shelter, water, tents, clothing, medical care, and the like? But actually, this point isn't at all obvious. If there is buying power, market forces are often extremely clever and flexible about making goods available. One of the most famous works by Amartya Sen, the 1998 Nobel laureate in economics, looked at causes of famine. As he pointed out, famines sometimes happened in places where there had been no drop in crop production; even in famine-stricken areas, large groups of people did get food; and in some cases, food was even being exported out of famine areas. In short, Sen pointed out that famine was often not a result of a physical shortage of food. Instead, it was the result of a large group of people people who found themselves unable to pay for food, often because some sort of disaster had wiped out their way of making a living. If the government provided income to people, perhaps through make-work show-up-you-get-paid jobs, then that local buying power would often bring a supply of food to the area.

The Panel's top recommendation is "Give more unconditional cash transfers. The questions should always be asked: ‘why not cash?’ and, ‘if not now, when?’" Let me first run through some of the advantages of making greater use of cash in humanitarian relief, in no particular order, and then consider some objections.

Humanitarian cash relief offers greater flexibility for the recipients, who can prioritize what is most important to them.

"A consistent theme in research and evaluations is the flexibility of cash transfers, enabling assistance to meet a more diverse array of needs. In the Philippines, for example, people reported using the money for food, building materials, agricultural inputs, health fees, school fees, sharing, debt repayment, clothing, hygiene, fishing equipment and transport. Often people spend the vast majority of cash in fairly predictable ways – during the Somalia famine, cash transfers were mainly used to buy food and repay loans. Sometimes there are surprises. In Lebanon, for example, while UNHCR provided cash to Syrian refugees to cope with the harsh winter conditions as an alternative to ‘winterisation kits’, most directed their additional income towards food and water. It is not that they did not need fuel – it was that they needed other things more. The element of choice is critical. ...

"The evidence shows that cash in humanitarian settings can be effective at achieving a wide range of aims – such as improving access to food, enabling households to meet basic needs, supporting livelihoods and reconstructing homes. ...  Cash impacts local economies and market recovery by increasing demand and generating positive multiplier effects. In Zimbabwe, every dollar of cash transfers generated $2.59 in income (compared to $1.67 for food aid). It can encourage the recovery of credit markets by enabling repayment of loans."


"Cash transfers can also make limited humanitarian resources go further. ...  It usually costs less to get money to people than in-kind assistance because aid agencies do not need to transport and store relief goods.A four-country study comparing cash transfers and food aid found that 18% more people could be assisted at no extra cost if everyone received cash instead of food."

In Lebanon in 2014, 30 aid agencies provided cash transfers and vouchers for 14 different objectives, including winterisation, legal assistance and food. People do not divide their needs by sectors and clusters. A more logical approach is to have fewer, larger-scale interventions providing unconditional cash grants using common delivery infrastructure where possible, complemented by other forms of humanitarian aid in sectors where cash is not appropriate. ...

Providing cash does not and should not mean that humanitarian actors lose a focus on a key public good that they are uniquely placed to provide: proximity, presence and bearing witness to the suffering of disaster-affected populations. On the contrary, streamlining aid delivery should allow them more time to focus on exactly that. Giving people cash, therefore, does not imply simply dumping the money and leaving them to fend for themselves. People receiving cash intended to help meet shelter needs may require help to secure land rights, build disaster-resistant housing or manage procurement and contractors. Where people use cash to buy agricultural inputs this can be complemented with extension advice.

Humanitarian cash payments can help build links between low-income people and the financial sector. As I noted in an earlier post: "For the individual, it provides safety for saving, a channel for receiving and making payments, and the possibility of getting a loan at a more reasonable rate than offered by an informal money-lender. An economy in which many people have bank accounts will find it easier to make transactions, both because buying and selling are easier and because whether a payment was in fact made can be verified by a third party." Many low-income countries are moving toward providing government payments through electronic accounts already. Providing humanitarian aid through these channels may be less prone to corruption, and easier to audit, than providing in-kind assistance.

Perhaps the main concern with using cash for humanitarian relief is that it won't benefit those in need. It could be skimmed off in some way, or those who receive it might spend it on the local intoxicants rather than feeding their children. Cash assistance is surely susceptible to these problems, but so are other sorts of aid. There are plenty of stories of emergency supplies of food being stolen and sold. Those who get physical aid can sell what they have received in the black or the gray market for cash, and then buy whatever else they want instead. The report cites one study that 70% of Syrian refugees in Iraq have sold or traded some of the in-kind aid they received.


"Evidence from humanitarian settings and from social protection overwhelmingly demonstrates that people receiving money tend to buy what they most need and do not spend it on alcohol or tobacco or for other anti-social purposes. There are inevitably some exceptions, because crises and disasters do not change the fact that there are some irresponsible people in the world, but the evidence is clear that cash is no more likely to be used irresponsibly than other kinds of assistance (which can be sold to buy other things, and often is).

Of course, humanitarian aid in the form of cash doesn't work all the time. But as the report notes:


Nobody expects cash to replace vaccines or therapeutic feeding for malnourished children, or that money alone can enable the safe rebuilding of shelters. But the times and contexts when cash isn’t appropriate are narrow and limited, and should not be used as excuses to continue providing in-kind assistance if cash becomes possible. Markets recover quickly after disasters and continue during conflicts.

Here's the membership of the Panel: 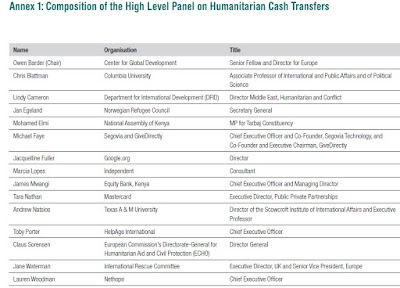