Each year the United Nations High Commissioner for Refugees publishes a "Global Trends" report. The report for 2014, published in June 2015, was titled: "World at War: Forced Displacement in 2014." The report doesn't have much do say about policy details: it's focused mainly on describing the scope of the problem. It's perhaps useful to lay out some terms that are used in specific ways in the report, although they are often used more-or-less interchangeably in media reports and conversation.

Displaced persons is an overall category for those who have been forced to move "as a result of persecution, conflict, generalized violence, or human rights violations. The UNHCR report notes:


"The year 2014 has seen continuing dramatic growth in mass displacement from wars and conflict, once again reaching levels unprecedented in recent history. One year ago, UNHCR announced that worldwide forced displacement numbers had reached 51.2 million, a level not previously seen in the post-World War II era. Twelve months later, this figure has grown to a staggering 59.5 million,  roughly equalling the population of Italy or the United Kingdom. Persecution, conflict, generalized violence, and human rights violations have formed a ‘nation of the displaced’ that, if they were a country, would make up the 24th largest in the world."


According to the report, the total of 59.5 million displaced people can then be divided up into three groups: 19.5 million refugees, 38.2 million internally displaced persons, and 1.8 million asylum-seekers. This total does not include as many as 10 million "stateless" persons, who are living in a country but not recognized as citizens of that country--or of any other country. According to a 2014 UNHCR report, some examples of the stateless include:

More than two decades after the disintegration of the Soviet Union, over 600,000 people remain stateless. Some 300,000 Urdu-speaking Biharis were denied citizenship by the government of Bangladesh when the country gained its independence in 1971. A 2013 Constitutional Court ruling in the Dominican Republic led to tens of thousands of Dominicans, the vast majority of Haitian descent, being deprived of their nationality, and of the rights that flowed from it. More than 800,000 Rohingya in Myanmar have been refused nationality under the 1982 citizenship law and their freedom of movement, religion and education severely curtailed.

Refugees are defined in this way: "According to the 1951 Refugee Convention, a refugee is a person who is outside the country of his or her nationality and is unable or unwilling to avail him- or herself of the protection of that country because of a well-founded fear of being persecuted for reasons of “race”, religion, nationality, political opinion or membership of a particular social group in case of return. People fleeing conflicts or generalized violence are also generally considered as refugees, although sometimes under legal mechanisms other than the 1951 Convention."

Of the 19.5 million refugees, 5.1 million are Palestinians. Of the remaining 14.4 million, here are their countries of origin. While the large recent increase in refugees from Syria as moved that country to the top of this list in 2014, the top place on the list for the previous 30 years had been held by Afghanistan. Indeed, there are still 2.6 million refugees from Afghanistan living outside their country, some of whom have now been refugees for more than three decades since the late 1970s and early 1980s. 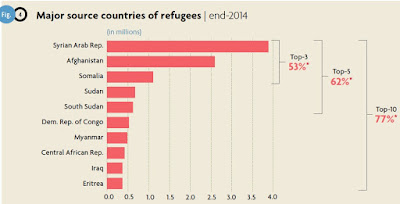 Other than the countries on this list: "Other main source countries of refugees were Colombia, Pakistan, and Ukraine. The number of Colombian refugees (360,300) decreased by 36,300 persons compared to the start of the year, mainly as a result of a revision in the number in the Bolivarian Republic of Venezuela. In contrast, figures for both Pakistan and Ukraine increased dramatically. In Pakistan, some 283,500 individuals fled to Afghanistan as armed conflict in their country unfolded during the year; likewise, fighting in eastern Ukraine not only displaced more than 800,000 people within the country but also led to 271,200 persons applying for refugee status or temporary asylum in the Russian Federation." 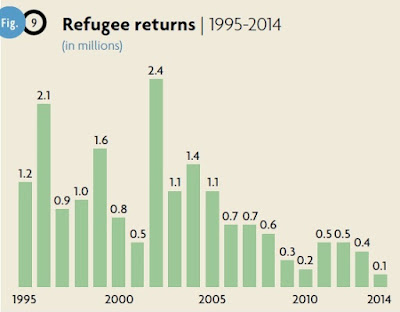 There doesn't seem to be good data on what numbers of refugees end up being locally integrated in a given year. Such integration is often a slow and evolving process. The category of "resettlement" is what the current US disputes are about. The US has in recent years been the destination for about two-thirds of resettled refugees.

This overview of displaced persons, refugees, and resettlement suggests that in a global perspective, US discussions of whether resettle perhaps 10,000 refugees from Syria is heavier on symbolism and emotion than on addressing the actual underlying humanitarian situation. It won't make much of a dent in the total number of the 3.8 million refugees from Syria, or the the 2.6 million Afghan refugees, or the millions of other refugees. It doesn't start to address the question of whether the US or the international community should seek to address the humanitarian needs of the 38.2 million internally displaced persons, who aren't counted in the total number of refugees.

Along with the immediate issues of how to support refugees and other displaced persons wherever they are, the ultimate question is about what the UNHCR calls the "durable solution." Is the vision here that most of the refugees will ultimately return to their home countries, or not?  The historical presumption has been that most refugees will return to their home countries, and resettlement elsewhere is for a few extreme situations. If there is a shift to a presumption that a high proportion of those refugees will be resettled in high-income countries, then the issue of refugees quickly becomes entangled in broader questions about freedom of international immigration.