The Size of Automatic Stabilizers in the US Budget

The notion that bigger budget deficits (or smaller surpluses) can help to stimulate an economy in recession, and that smaller budget deficits (or bigger surpluses) can help to prevent an economy from being overstimulated into inflation, are the core ideas of countercyclical fiscal policy. As every intro econ textbook points out, this countercyclical fiscal policy can be "automatic" or "discretionary."

Discretionary fiscal policy is perhaps easier to understand: for example, it's when government passes new laws to raise spending or cut taxes in a recession. But automatic countercylical fiscal policy--also called "automatic stabilizers"--happens without any new legislation being passed. When the economy heads south so that incomes and profits fall, less in taxes is collected automatically, with no need for new legislation. When the economy booms so that incomes rise, there is automatically less need for government programs like Medicaid or welfare payment, again with no need for new legislation.

How big are the automatic stabilizers? Frank Russek and Kim Kowalewski offer some estimates, along with lots of detail about how these calculations are made, in "How CBO Estimates Automatic Stabilizers," published in November 2015 as Congressional Budget Office Working Paper 2015-07. They write: 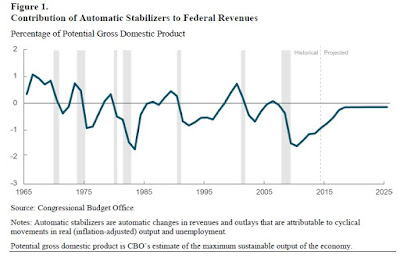 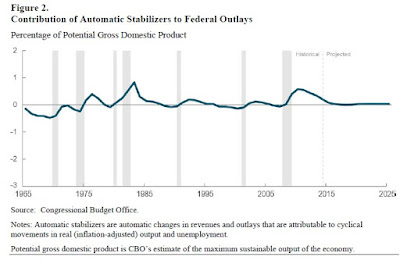 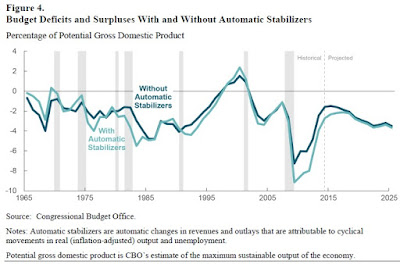 The existence of automatic stabilizers is one reason why it would be foolish to require that the federal budget be balanced in every year. Think about it: a recession arrives, and so tax revenues automatically fall and spending in recession-related categories automatically rises. A true believer that the budget should be balanced each year would have to argue that in the fact of that recession, taxes should be hiked and spending cut to offset the changes of the automatic stabilizers.