The Economics of the Retail Sector

Lots of economic analysis focuses on production, or on consumption. But there is less focus on the economic characteristics of what happens in between production and consumption--which is called the retail sector. In the Fall 2015 issue of the Journal of Economic Perspectives, Ali Hortaçsu and Chad Syverson look at "The Ongoing Evolution of US Retail: A Format Tug-of-War," while Bart J. Bronnenberg and Paul B. Ellickson take an international view in "Adolescence and the Path to Maturity in Global Retail." (Full disclosure: I've been Managing Editor of JEP since the first issue in 1987.)

Broadly understood,  the retail sector includes all of the activities between the producer and the consumer, which can include purchases by a wholesaler, transportation costs of shipping to warehouses, and the costs of holding that inventory for a time along with transportation costs of shipping to the retailer and the costs of retailing itself, including physical facilities and inventory costs. The evolution of retailing means that these costs are reshuffled among different players. For example, if I order a giant bulk-pack of paper towels from an e-retailer, and then store it in the basement and use it for several, I am bearing some of the storage and inventory costs that would otherwise be carried by a brick-and-mortar retailer.  However, the transportation costs of delivering that bulk-pack of paper towels from the e-retailer involves a relatively small shipment in a delivery van from a warehouse to my house, while the transportation costs of delivering to a warehouse store involves both a large truck shipment to the store, my own time and energy to pick up the bulk-pack and take it through check-out, followed by use of my own car to complete the delivery to my home. In various ways, the economic of retail involves issues of coordination, inventory-holding, economies of scale, as well as questions of how much variety is provided. 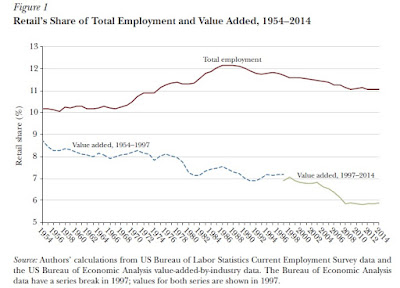 The story in US retail over the last few decades is the appearance of two new sets of players, each with a powerful gravitational pull that has greatly disrupted traditional retailes. One new set of players are the big box retailers, sometimes known as "warehouse clubs" and "supercenters," led by Walmart but also including Costco, Target, and others. The other new set of players are the e-commerce retailers, led by Amazon, eBay, and including many others.  In different ways, these new players in retail are both driven by changes in information technology. For the big-box retailers, information technology is how they manage their huge set of suppliers and  their inventories, allowing them to take advantage of economies of scale and scope. For the e-commerce retailers, information technology creates their virtual stores, ties them to their customers, and coordinates their shipping and billing. Hortaçsu and Syverson summarize the situation in US retail in this way:

"One can imagine the future of the retail sector as being pulled in one direction by the growth of e-commerce, which involves smaller employment firms, less market concentration, more geographical dispersion, and higher productivity. At the same time, the sector is being pulled in another direction by the warehouse clubs and supercenters, with higher employment firms, very high market concentration, location near population centers, and lower productivity relative to online channels. While warehouse clubs/supercenters have had more influence on the sector to this point, e-commerce has had its own effects and may be growing in relative importance. Perhaps this concurrent expansion and strength of e-commerce and a physical format portends a retail future not dominated by either, but rather with a substantial role for a “bricks-and-clicks” hybrid. The formats may end up being as much complements as substitutes, with online technologies specializing in product search and discovery, and physical locations facilitating consumers’ testing, purchase, and returns of products ...."

The international view of retail in the article by Bronnenberg and Ellickson shows a related transformation of retail happening at different speeds and in different ways around the word. They emphasize a broad view of retailing that includes potential roles for customers and government, as well as for retail firms themselves. For example, if customers have cars for transporting goods, spacious living accommodations for storage, and sufficient income, they will be more likely to buy bulk-packs of goods from warehouse retailers. The time consumers need to spend affects retail: for example, by encouraging e-commerce purchases that will be delivered.

A number of government policies affect retailing, including the road infrastructure, but also "the ease of obtaining building permits, the regulation of corruption, the availability of autos (through policies allowing the imports of used cars), and the minimum wage structure. ... In many emerging markets, another way in which government affects the retail sector lies in its ability to set policies regarding foreign direct investment."

Of course, large firms also play a role in what they call "modern retailing." They write:

"Firms are clearly the foremost strategic players driving the adoption of modern retailing technology. A modern chain of vertically integrated, large-format stores relies on an upstream distribution system of local producers, third-party logistics firms, and either third-party or integrated wholesalers who must all modernize together. Transactions that were often historically informal must be formalized through contracts with local suppliers and intermediaries. In a case study of Chile, Berdegué (2001) found that small farming cooperatives had to incur significant costs to deliver products of homogeneous quality, to coordinate harvest cycles, and to grade, sort, and package in a manner that met the downstream chain’s requirements. Also, adopting formal accounting processes makes previously informal transactions subject to taxes. ... Among the toughest coordination problems is the joint adoption of commonly used technology."

"In developed markets, the transition to modern retailing is nearly complete. In contrast, many low-income and emerging markets continue to rely on traditional retail formats, that is, a collection of independent stores and open air markets supplied by small-scale wholesalers, although modern retail has begun to spread to these markets as well. ... E-commerce is a notable exception: the penetration of e-commerce in China and several developing nations in Asia has already surpassed that of high-income countries for some types of consumer goods."

This graph shows the takeoff in e-commerce in China, as measured by retail in the two sectors of "Apparel/Footware" and "Electronics/Appliances." 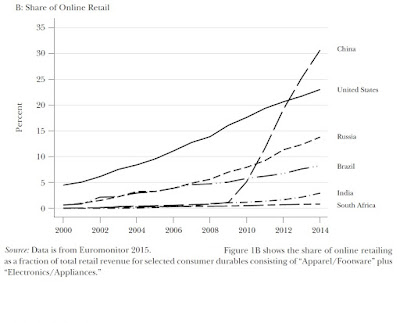 Bronnenberg and Ellickson agree that while e-commerce is going to be a big player in the future, it's not going to take over retail in general. Warehouses and supercenters will still play a large role, quite likely the dominant role, for some time to come. Other kinds of niche retailers--for example, those who specialize in a certain product, or those located in urban areas where huge store-spaces and parking places aren't available--will also play a role. In thinking about the tradeoffs of the various kinds of retail, they write:

"Online purchases have benefits and costs that vary by product category. For example, online purchase of physical goods introduces a delay between purchase and delivery, but also gives consumers a greater opportunity to comparison-shop by lowering search costs and travel time and provides a seamless method of gathering information on the experience of previous customers (through online reviews). On the other hand, online retail offers less ability to inspect goods before purchase (and adds the risk of not having a product delivered at all), which renders the reputation of the firm all the more important. Whether a purchase is made online or in-store clearly depends on the frequency of purchase, the homogeneity of the product, and the number of products typically purchased in a given occasion, amongst other factors. Books fall at one end of this spectrum, and thus, in modern retailing systems, are primarily bought online, while groceries fall at the other end, and are typically bought in-store."