How Many Deaths from Mistakes in US Health Care?

Back in the 1999, the Institute of Medicine (part of the National Academies of Science) estimated in its report To Err is Human that in 1997 at least 44,000 and as many as 98,000 patients died in hospitals as the result of medical errors that could have been prevented. Current estimates are higher, as Thomas R. Krause points out in "Department of Measurement: Scorecard Needed" in the Milken Institute Review (Fourth Quarter 2015, pp. 91-94). Krause writes:


"You've seen the astounding numbers: hundreds of thousands of Americans die each year due to medical treatment errors. Indeed, the median credible estimate is 350,000, more than U.S. combat deaths in all of World War II. If you measure the “value of life” the way economists and federal agencies do it – that is, by observing how much individuals voluntarily pay in daily life to reduce the risk of accidental death – those 350,000 lives represent a loss exceeding $3 trillion, or one-sixth of GDP. But when decades pass and little seems to change, even these figures lose their power to shock, and the public is inclined to focus its outrage on apparently more tractable problems."

In case you're one of the vast majority who actually haven't seen those estimates, or at least haven't mentally registered that they exist, here are a couple of the more recent underlying sources.

The Agency for Healthcare Research and Quality (part of the US Department of Health and Human Services) published in May 2015 the 2014 National Healthcare Quality and Disparities Report. Here are some good news/bad news statistics from the report:


From 2010 to 2013, the overall rate of hospital-acquired conditions declined from 145 to 121 per 1,000 hospital discharges. This decline is estimated to correspond to 1.3 million fewer hospital-acquired conditions, 50,000 fewer inpatient deaths, and $12 billion savings in health care costs. Large declines were observed in rates of adverse drug events, healthcare-associated infections, and pressure ulcers.

The good news is 50,000 fewer deaths, along with health improvements and saving money. The bad new is that the rate of hospital-acquired conditions basically fell from one patient in every seven patients to one out of every eight. Sure, hospital-acquired conditions will never fall to zero. But it certainly looks to me as if at least tens thousands of lives were being lost each year because that rate had not been reduced, and that tens of thousands of additional could be saved be reducing the rate further. For another analysis in a different setting, here's a 2014 US government study about adverse and preventable effects of care in nursing care facilities.

John T. James published "A New, Evidence-based Estimate of Patient Harms Associated with Hospital Care" in the Journal of Patient Safety (September 2013, pp. 122-128). James reviews four studies of quality of care that focus on relatively small numbers of patients (three of the studies are less than 1000 patient records, the other is 2,300). He uses a software package called the Global Trigger Tool to flag cases where preventable errors might have occurred, and then those cases are examined by physicians. James describes the process this way:


The GTT depends on systematic review of medical records by persons trained to find specific clues or triggers suggesting that an adverse event has taken place. For example, triggers might include orders to stop a medication, an abnormal lab result, or prescription of an antidote medication such as naloxone. As a final step, the examination of the record must be validated by 1 or more physicians. As will be shown shortly, the methods used to find adverse events in hospital medical records target primarily errors of commission and are much less likely to find harm from errors of omission, communication, context, or missed diagnosis.

Projecting from four small studies to national patterns is obviously a little dicey, but for what it's worth, James finds:


Using a weighted average of the 4 studies, a lower limit of 210,000 deaths per year was associated with preventable harm in hospitals. Given limitations in the search capability of the Global Trigger Tool and the incompleteness of medical records on which the Tool depends, the true number of premature deaths associated with preventable harm to patients was estimated at more than 400,000 per year. Serious harm seems to be 10- to 20-fold more common than lethal harm.

My reactions to this body of evidence on the prevalence and costs of mistakes in the US health care system can be summarized in two bits of skepticism and one burst of outrage.

It seems sensible to be skeptical about the largest estimates of the size of the problem. There are obviously issues in deciding what was "preventable" or a "mistake."

The other bit of skepticism is that seeking to reduce the problem of medical errors is harder than it might at first sound. For example, Christine K. Cassel, Patrick H. Conway, Suzanne F. Delbanco, Ashish K. Jha, Robert S. Saunders, and Thomas H. Lee wrote about some efforts to measure and set guidelines for health care in "Getting More Performance from Performance Measurement." which appears in the New England Journal of Medicine on December 4, 2014. They point out that there are often literally  hundreds of measures of quality of care, some important, some not, and many that turn out to be useless or even harmful.


Many observers fear that a proliferation of measures is leading to measurement fatigue without commensurate results. An analysis of 48 state and regional measure sets found that they included more than 500 different measures, only 20% ofwhich were used by more than one program. Similarly, a study of 29 private health plans identified approximately 550 distinct measures, which overlapped little with the measures used by public programs. Health care organizations are therefore devoting substantial resources to reporting their performance to regulators and payers; one northeastern health system, for instance, uses 1% of its net patient-service revenue for that purpose. Beyond the problem of too many measures, there is concern that programs are not using the right ones. Some metrics capture health outcomes or processes that have major effects on overall health, but others focus on activities that may have minimal effects. ...

Unfortunately, for every instance in which performance initiatives improved care, there were cases in which our good intentions for measurement simply enraged colleagues or inspired expenditures that produced no care improvements. One example of a measurement effort that had unintended consequences was the CMS quality measure for community-acquired pneumonia. This metric assessed whether providers administered the first dose of antibiotics to a patient within 6 hours after presentation, since analyses of Medicare databases had shown that an interval exceeding 4 hours was associated with increased in-hospital mortality. But the measure led to inappropriate antibiotic use in patients without community-acquired pneumonia, had adverse consequences such as Clostridium difficile colitis, and did not reduce mortality. The measure therefore lost its endorsement by the National Quality Forum in 2012, and CMS removed it from its Hospital Inpatient Quality Reporting and Hospital Compare programs.

But even after acknowledging that quantifying death and injury caused by health care mistakes is an inexact process, and fixing it isn't simple, the sheer scale of the issue remains.

The US economy will spend about $3 trillion this year on health care. As Krause noted at the start, the loss of 350,000 lives life from preventable errors, if we value a life at about $9 million as is commonly done by federal regulators, means that the total costs of death from by health care mistakes is about  $3 trillion. On one side, perhaps this total is overstated. On the other side, it includes only costs of deaths, not health costs from serious but nonlethal harms (which James estimates are 10 or 20 times as common), and not the costs of resources used by the health care system in seeking to deal with mistakes already made. 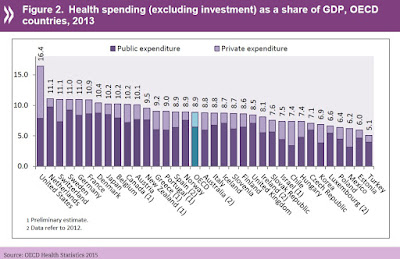 Posted by Timothy Taylor at 9:15 AM