For example, during the sluggish aftermath of the Great Recession, more people are drawing unemployment benefits, and relying on programs like Food Stamps and Medicaid. Conversely, the unemployed and underemployed are making lower income tax payments than they would have made if employed. These effects are built into the design of the tax code and into the design of safety net programs. This is how automatic stabilizers work. The CBO reports: "In fiscal year 2012, CBO estimates, automatic stabilizers added $386 billion to the federal budget deficit, an amount equal to 2.3 percent of potential GDP ... That outcome marked the fourth consecutive year that automatic stabilizers added to the deficit by an amount equal to or exceeding 2.0 percent of potential GDP, an impact that had previously been equaled or exceeded only twice in the past 50 years, in fiscal years 1982 and 1983 ..." 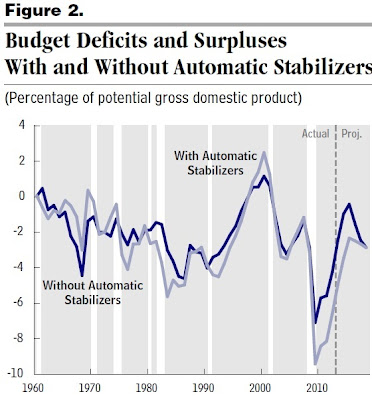 For the record, you may sometimes hear someone make a comment about the “cyclically adjusted deficit” or the “structural deficit.” These terms refer to what the budget deficit (or surplus) would be without the automatic stabilizers--it's the blue line in the figure above.

As a policy tool, automatic fiscal stabilizers have the great advantage that they take effect in real time as the economy changes, without a need for legislation. Even those who may oppose discretionary fiscal policy, where additional tax cuts or spending increases are passed after a recession is underway, don't oppose the idea that when people's income falls, their taxes should fall and their use of safety net programs should rise.