Rise of the Global South

The ongoing purpose of the Human Development Report, published by the United Nations Development Programme, is to serve as a reminder that GDP isn't all that matters. Yes, income matters, but so does education, health, inequality of incomes, treatment by gender and race, voice in how you are governed, and many other dimensions. Each year, the report produces detailed tables on many measures of well-being, including a Human Development Index that ranks countries by a weighted combination of life expectancy, education, and income. he 2013 edition of the Human Development Report  has the theme  "The Rise of the South: Human Progress in a Diverse World." It points out that the countries of the world are seeing a convergence in HDI values: that is, the gains in low- and middle-income countries are larger than the gains in high-income countries.


"Over the past decades, countries across the world have been converging towards higher levels of human development, as shown by the Human Development Index (HDI), a composite measure of indicators along three dimensions:life expectancy, educational attainment and command over the resources needed for a decent living. All groups and regions have seen notable improvement in all HDI components, with faster progress in low and medium HDI countries."


Of course, the HDI is inevitably imperfect as well. The purpose of the measure is to push us all to remember the multiple dimensions of human well-being, not to pretend that human well-being can be captured in a single number. As Amartya Sen writes in some short comments accompanying the 2013 report: "Gross domestic product (GDP) is much easier to see and measure than the quality of human life that people have. But human well-being and freedom, and their connection with fairness and justice in the world, cannot be reduced simply to the measurement of GDP and its growth rate, as many people are tempted to do. The intrinsic complexity of human development is important to acknowledge ... We may, for the sake of convenience, use many simple indicators of human development, such as the HDI, based on only three variables with a very simple rule for weighting them—but the quest cannot end there. ... Assessing the quality of life is a much more complex exercise than what can be captured through only one number, no matter how judicious is the selection of variables to be included, and the choice of the procedure of weighting."

Each year, the HDR is a treasure trove of figures and tables and evidence. Here, I'll focus on one theme that caught my eye: the relationship of globalization and human development. I sometimes hear the complaint that globalization is all for the benefit of high-income countries, and is making the rest of the world worse off. But that complaint doesn't seem to hold true. As Kofi Annan said some years ago when he was  Secretary-General of the United Nations, "[T]he main losers in today's very unequal world are not those who are too much exposed to globalization. They are those who have been left out."

Here's a figure illustrating the point. The horizontal axis shows the change in trade/output ratio from 1990 to 2010. The vertical axis shows "human progress" as measured by relative improvement in an HDI value. Clearly, those countries with the biggest changes in trade/output value were far more likely to have larger-than-average gains in HDI. Conversely, countries where the trade/out value dropped were far more likely to see lower-than-average gains in HDI. 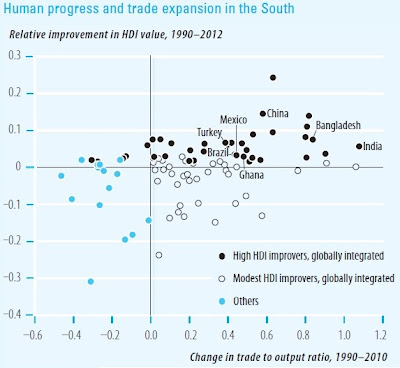 Here are a comments from the HDR on our globalizing world economy:


"The South needs the North, and increasingly the North needs the South. The world is getting more connected, not less. Recent years have seen a remarkable reorientation of global production, with much more destined for international trade, which, by 2011, accounted for nearly 60% of global output. Developing countries have played a big part: between 1980 and 2010, they increased their share of world merchandise trade from 25% to 47% and their share of world output from 33% to 45%. Developing regions have also been strengthening links with each other: between 1980 and 2011, South–South trade increased from less than 8% of world merchandise trade to more than 26%. ... Global markets have played an important role in advancing progress. All newly industrializing countries have pursued a strategy of “importing what the rest of the world knows and exporting what it wants.”"


Whether for a high-income country like the United States or for other countries of the world, the path to an improved standard of living for average people involves more engagement with the global economy, not less.