I've posted on this blog in the past about how the U.S. economy has experienced a declining labor share of income. The just-released 2013 Economic Report of the President, from the Council of Economic Advisers, points out that this pattern holds across countries--and in fact is on average more severe in other developed economies than in the United States. The ERP writes (with citations omitted for readability):

"The “labor share” is the fraction of income that is paid to workers in wages, bonuses, and other compensation. ... The labor share in the United States was remarkably stable in the post-war period until the early 2000s. Since then, it has dropped 5 percentage points. ....  The decline in the labor share is widespread across industries and across countries. An examination of the United States shows that the labor share has declined since 2000 in every major private industry except construction, although about half of the decline is attributable to manufacturing. Moreover, for 22 other developed economies (weighted by their GDP converted to dollars at current exchange rates), the labor share fell from 72 percent in 1980 to 60 percent in 2005."

Here's a figure showing the change. 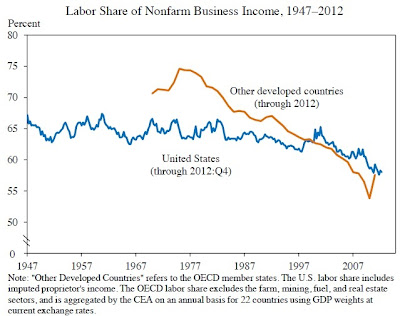 The reasons behind the substantial fall in labor share are a "topic for future research," which is to say that there isn't an agreed-upon answer. But there is a list of possibilities from the ERP discussion:

"Proposed explanations for the declining labor share in the United States and abroad include changes in technology, increasing globalization, changes in market structure, and the declining negotiating power of labor. Changes in technology can affect the share of income going to labor by changing the nature of the labor needed for production. More specifically, much of the investment made by firms over the past two decades has been in information technology, and some economists have suggested that information technology reduces the need for traditional types of skilled labor. According to this argument, the labor share has fallen because traditional middle-skill work is being supplanted by computers, and the marginal product of labor has declined. Increasing globalization also puts pressure on wages, especially wages in the production of tradable goods that can be produced in emerging market countries and some less-developed countries. These pressures on wages can lead to reductions in the labor share. Changes in market structure and in the negotiating power of labor could also lead
to a declining labor share. One such change is the decline in unions and collective bargaining agreements in the United States."