Most people start drawing Social Security benefits as soon as they retire. But as John B. Shoven explains in "Efficient Retirement Design," a March 2013 Policy Brief for the Stanford Institute for Economic  Policy Research, this strategy is usually a mistake--and a mistake that have a loss in value of as much as $250,000. To understand the issues here, let's set the stage with some facts. 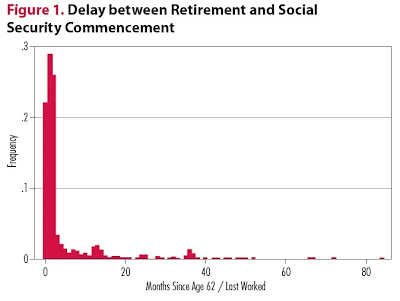 Shoven demonstrates this point with a wide variety of examples, and in a working paper written with Sita Slavov, they consider even more examples and issues.  As one example, Shoven suggests looking at a married couple, both age 62, who want to retire. The husband's average earnings have been $56,000 per year, while the wife's average earnings have been $42,000 per year. They have $257,000 in their retirement accounts. One possibility is that they both start drawing Social Security immediately. However, in another alternative they instead live on their retirement account until age 66, when the lower earner starts drawing Social Security, and then at 70, the higher earner starts drawing Social Security. The husband's monthly Social Security check at age 70 will be 76 percent higher than if he had started drawing benefits at age 62.

This "66/70 strategy," in which the lower earner of a couple doesn't draw Social Security benefits until age 66 and the higher earner defers benefits until age 70, is often a useful approach. In this example, the couple ends up with $600 more in income per month at age 70. The gain gets bigger over time, as Social Security benefits are adjusted upward. For example, if inflation is 2% per year, and the couple lives to age 90, their income would be $1400/month higher because of following the 66/70 choice for drawing Social Security benefits, instead of drawing the benefits when they retired at age 62. The gain over their lifetime from drawing benefits later is more than $200,000.

Shoven concludes: "The general message, however, is that Social Security deferral is a good deal for most people. Wehave looked at people with far less in terms of assets than the couple just described. We have looked at the matter by race, by education and by health. ...Our conclusion is that most people should be using at least a substantial part of their retirement savings to defer Social Security rather than supplement it. Almost no one is getting it right."

The question of why people don't delay Social Security benefits hasn't been much researched, but it's fun to speculate. For some people, presumably the answer is just that they haven't considered deferring Social Security for a few years after retirement.  Some people might fear that Social Security won't be there in the future. Others might be concerned that if they don't take Social Security immediately, they might die before receiving it (although in this case, death would seem to be a bigger problem than leaving some government benefits unclaimed!). Not taking Social Security immediately upon retirement feels like "leaving money on the table." Spending your discretionary money first feels as you are giving up your flexibility and your cushion. But although these kinds of feelings are real, they don't change the arithmetic of the situation, which shows that spending discretionary retirement income first and drawing Social Security later will provide gains to most people.