The Decline in Private K-12 Enrollment

Enrollment in private K-12 schools has been falling in recent years, and private schools are a much smaller share of K-12 enrollment than a half-century ago. Stephanie Ewert of the Social, Economic, and Housing Statistics Division of the U.S. Census Bureau lays out some facts in "The Decline in Private School Enrollment," published in January 2013 as SEHSD Working Paper Number FY12-117.
Here's a figure showing the long-term decline in private share of total K-12 school enrollment. Notice that the big decline happened in the 1960s, but there is also a decline since the early 2000s. 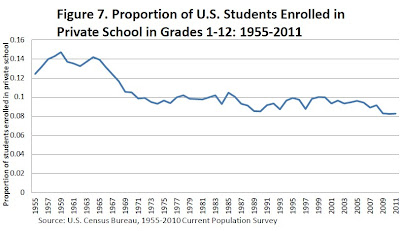 And here's a figure showing the number of students enrolled in private schools since 1989. The Current Population Survey and Private School Universe Survey have data over this time, and both show a rise in private school enrollments in the 1990s, but a fall since around roughly 2000. 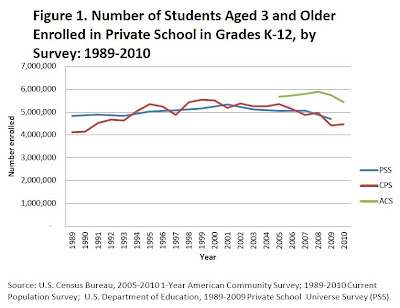 Ewert focuses on presenting facts and suggestions possible hypotheses, mostly leaving the airier speculation to the rest of us. So here goes.

The very large drop in the importance of private schools back in the 1960s was surely intertwined with two big factors. One was that as the baby boom generation entered school age, they were clearly much more likely to attend public schools than their predecessors. The other factor was the changing importance of the Catholic school system. As Ewert points out, Catholic schools made up 60 percent of private school enrollment in 1930, and in large cities like New York City, Catholic schools educated one-third of all students at that time. But the move of the population to schools in the suburbs largely left the Catholic schools behind, and one suspects that something about the ethos of the 1960s made the Catholic schools a less attractive alternative for many families who would have considered them in the 1950s and earlier.
The more recent drop doesn't look as large in long-term perspective, but it's still significant. Ewert writes:  "For example, the PSS shows that there were 5.3 million students enrolled in private school in the 2001-2002 school year but only 4.7 million in the 2009-2010 school year. Similarly, the CPS data indicate that there were 5.4 million private school students in 2002 but only 4.5 million in 2010."

Likely explanations for this more recent decline would include: the rise of "charter" public schools, the rise of homeschooling, the reputation problems of the Catholic church in the aftermath of its child abuse scandals, and in the last few years the economic woes that have made paying private school tuition harder for many families.

I attended public schools from K-12, and I have little sentimentality about private ones. But I do think that K-12 education needs to evolve with the times, and that evolution is usually built on seeing how different approaches work, and that public schools have not always been much good at experimenting with different approaches and seeing what works for different student groups. Private schools have long offered a range of alternatives, and if they continue to face, I hope that some mixture of charter schools and home schooling can continue to offer a source for experimentation in education.

Posted by Timothy Taylor at 8:18 AM