Global financial markets were expanding for several decades up to about 2007. Since then, they have been more-or-less treading water in absolute size. Financial markets are smaller as proportion to the global economy in 2011 and 2012 than they were back in 2005, 2006, and 2007. And if it wasn't for the enormous growth in government debt, which has helped to pump up the size of financial markets around the world, the global financial sector would look even smaller. Should we welcome this change? Fear it? Not care? The McKinsey Global Institute tackles this question in its March 2013 report Financial globalization: Retreat or reset? co-authored by Susan Lund, Toos Daruvala, Richard Dobbs, Philipp Härle, Ju-Hon Kwek, and Ricardo Falcón. 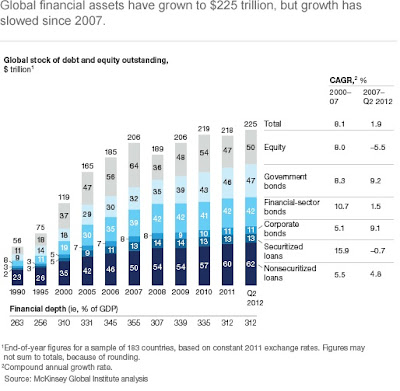 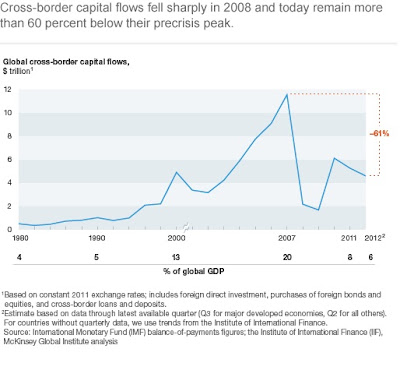 From one point of view, as the McKinsey report emphasizes, the stagnation of financial assets and the drop in cross-border capital flows since about 2007 is nothing but the pendulum swinging back: after all, if we agree that many credit markets and stock markets around the world were pumped up by an unsustainable bubble back in 2007, then it shouldn't be any surprise to find that after the crisis, the size of financial assets relative to the economy falls. If we agree that a lot of the cross-border flows in Europe, which are probably the single main driver of that spike in cross-border flows around 2007, were an unsustainable part of a borrowing boom from countries like Greece and Ireland, then its no shock that these flows will drop off.

But the McKinsey folks are brave (or foolhardy?) enough to make another point that isn't popular to hear right now: Just because the financial sector had an unsustainable bubble back in 2007 doesn't mean that a financial sector which grows more slowly and appropriately over time is counterproductive. If there is less credit available in many developing countries, because cross-border capital flows are cut back, growth in many of those countries will be hindered. In addition, if global markets are permanently stunted, then investors in high-income countries, including pension funds, insurance companies, and mutual funds, will receive lower returns and less diversification of their portfolios.

The goal of public policy should not be to cripple capital markets, but rather to rein in their excesses and focus their energies on more productive paths. What does that mean in practice? For example, the McKinsey folks suggest that as banks face tighter regulation to reduce their risk exposures, corporations will need to borrow more through bond markets--which are not backed by a government guarantee!

In addition, developing economies as a group have a relatively small financial sectors, which probably need to expand as their economies grow. The McKinsey folks write: "Developing nations also have significant room to deepen their financial markets. On average, equity market capitalization is equivalent to 44 percent of GDP in developing countries, compared with 85 percent in advanced economies. Credit to households and debt of corporations combined is only 76 percent of GDP in emerging markets, compared with 146 percent of GDP in advanced economies. McKinsey research has estimated that small and medium-sized enterprises (SMEs) in emerging markets face a $2 trillion credit gap, and 2.5 billion adults around the world lack access to banking services. If developing nations converge to the average financial depth currently seen in advanced economies over the next two decades, their financial assets could grow from $43 trillion today to more than $125 trillion by 2020."

Global financial markets should be nudged a bit toward longer-term financing, like foreign direct investment where investors take a partial ownership stake, rather than short-term lending. Banks may take on more of an advisory role, being paid by fees to help their customers raise money in bond markets and make necessary deals, rather than risking their own capital on such deals.