Perspectives on a Sluggish Recovery

The 2013 edition of the Economic Report of the President, written annually by the President's Council of Economic, is now available. I'll probably do several posts about various themes and topics from the report during the next week or so. Here, I want to focus on some perspectives that the report offers about the sluggish economic recovery.

One intriguing insight, at least for me, is that the pace of the recovery of the economy from the end of the recession has in some ways actually been not too far from historical patterns. However, this recession was exceptionally long and deep, which helps to explain why the recovery feels so inadequate. For example, here's a figure showing the pattern of employment after recession. On the horizontal axis, the date of 0 is the "trough" or final month of the recession. That level of employment is set equal to an index number of 100 on the vertical axis. Notice that after the trough of the recession, the growth in jobs has been similar to aftermath of the 1991 recession and faster than the 2001 recession. However, if you look at the time before the recession, the fall in jobs during the recession, before the trough, was much longer and much deeper in the Great Recession. 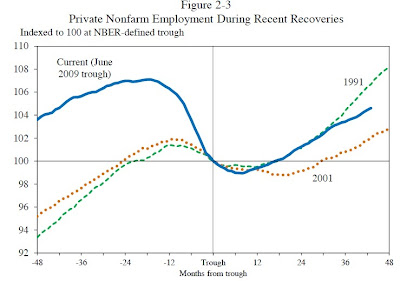 The pace of economic growth in the recovery has been notably slower than historical averages. For example, here's a figure comparing growth after the trough since the two previous recessions of 2001 and 1991, as well as against the average period for all the recessions from 1960 to 2007.  The current recovery clearly lags behind. 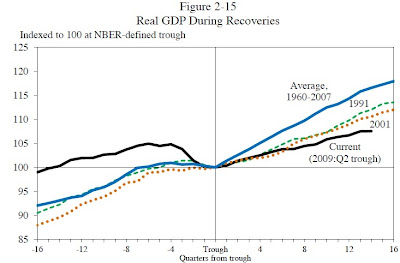 But there are some other ways of looking at this slower growth, as well. For example, compare the U.S. recovery to that of the economy of the countries of Europe that are in the euro area, or the economy of the United Kingdom. The pattern looks similar in 2007, leading up to the recession, and through 2008 and into 2009, when the recession hit. The recovery for the euro area also looked farly similar to the U.S. experience for a time, up to early 2011. At about that time, the euro area economy began to suffer through its own second wave of problems. Thus, while real GDP in the U.S. economy had exceeded pre-recession levels by late 2011, real GDP in the euro area and the UK has not yet recovered to pre-recession levels.  The U.S. recovery has been sluggish; for the euro area, the recovery is not yet complete. 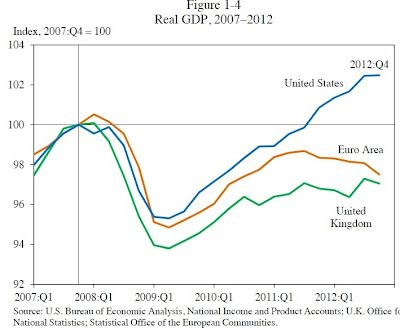 The report also points out that there is an historical pattern that periods of economic recovery have been experiencing slower growth with each business cycle since 1960. Consider the figure below, showing real GDP from 1960 to 2012. Each of the dashed lines is an extrapolation from the period of economic growth before a recession hit. The slopes of those dashed lines are getting flatter over time, showing that the growth phase of each business cycle has been slowing down. 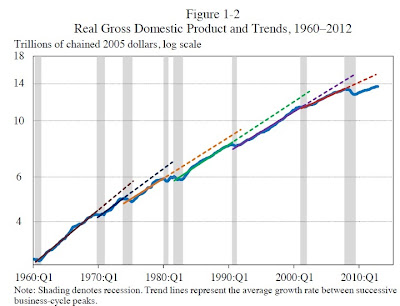 There are two broad reasons for this slowdown. Real GDP growth is in part due to population growth: more population has meant more workers and faster growth, but population growth has been declining over time, reducing the rate of GDP growth. The other factor is that productivity levels have sagged since the 1960s. There was a modest resurgence of productivity growth for a time in the second half of the 1990s and into the early 2000s, but that boost seems to have faded.

One of my ongoing mental tasks during the past few years and the next few years is to organize my thoughts about the patterns of the Great Recession and its aftermath, and to put those patterns in historical and international context.