It's common to describe the U.S. as having employer-based health insurance, and while that statement is broadly true, it doesn't capture the limitations of this approach. Hubert Janicki of the U.S. Census Bureau lays out some of the basic trends and patterns in "Employer-Based Health Insurance: 2010," a February 2013 report. Here are a few facts: 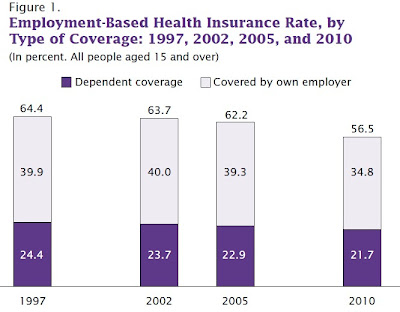 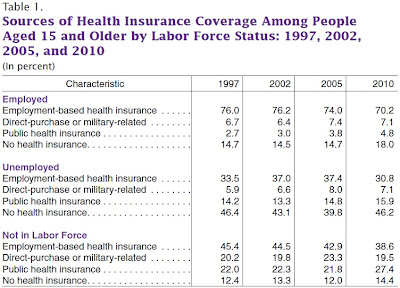 In other words, employer-provided health insurance has long fallen short of universal coverage, and it's been getting skimpier over the last decade or so. For example, those with lower incomes and those working for smaller firms are less likely to have employer-based health insurance.

"Less than one half (45.3 percent) of people working in firms with fewer than 25 employees received health insurance benefits compared with 88.8 percent for people who worked for firms employing 1,000 or more employees ..."


It's always worth remembering (and I have noted before on this blog) that the predominance of employer-provided health insurance in the U.S. economy is an historical accident. Melissa Thomasson offers a nice overview in "From Sickness to Health: The Twentieth-Century Development of U.S. Health Insurance," in the July 2002 issue of Explorations in Economic History, but that's not freely available on-line. However, Thomasson offers a brief overview at the Economic History Association website here. Thomasson points out that the number of Americans with health insurance went from 15 million in 1940 to 130 million in 1960. Blue Cross/Blue Shield plans began to be established in the 1930s. Then in World War II, the fateful decision was made to encourage employers to provide health insurance, and not to tax individuals on the value of that health insurance they received. Here's Thomasson:


"During World War II, wage and price controls prevented employers from using wages to compete for scarce labor. Under the 1942 Stabilization Act, Congress limited the wage increases that could be offered by firms, but permitted the adoption of employee insurance plans. In this way, health benefit packages offered one means of securing workers. ... [I]n 1949, the National Labor Relations Board ruled in a dispute between the Inland Steel Co. and the United Steelworkers Union that the term "wages" included pension and insurance benefits. Therefore, when negotiating for wages, the union was allowed to negotiate benefit packages on behalf of workers as well. This ruling, affirmed later by the U.S. Supreme Court, further reinforced the employment-based system.

If you feed any industry with enormous tax breaks, especially especially an insurance industry that separates both providers and ultimate consumers from facing costs directly, you are likely to get high levels of spending that, on the margin, bring only very slight benefits.