Most people are familiar with the benefits of diversification of their investments. "Don't put all your eggs in one basket!" But in one particular way, most investors seem dramatically underdiversified in this globalizing economy: that is, they have a disproportionate share of their investments in their own country, rather than diversified across the countries of the world. In the most recent issue of the Journal of Economic Literature, Nicolas Coeurdacier and Hélène Rey discuss what is known about "Home Bias in Open Economy Financial Macroeconomics." The JEL is not freely available on-line, but many academics will have access either through library subscriptions or through their membership in the American Economic Association. 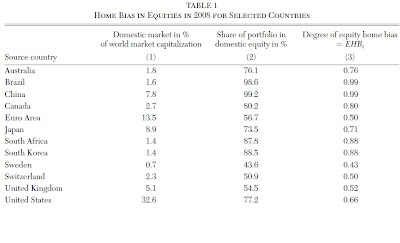 The third column of the table is a common measure of "equity home bias" or EHB, defined as:

Home bias has been declining over the last few decades in most high-income countries, and some low-income countries, but it remains high. Here are some illustrative figures for home bias in equities, bonds, and bank assets. 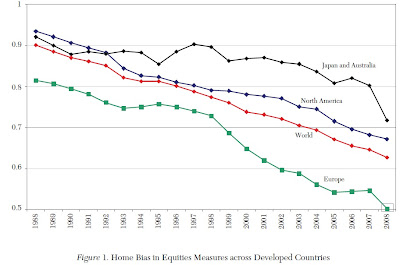 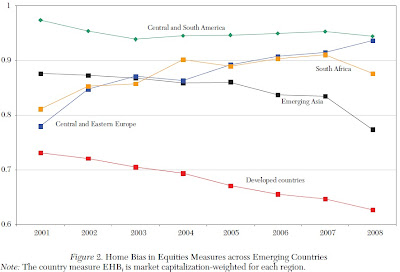 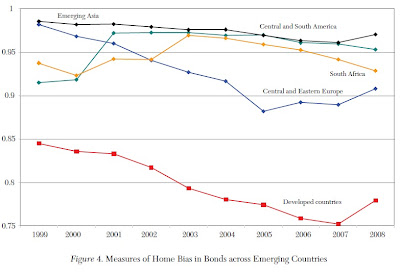 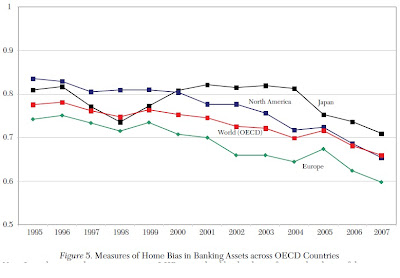 But despite the declines in home bias, it remains notably high. Why are people around the world not taking better advantage of the opportunities for global diversification? This puzzle hasn't been fully resolved, but Coeurdacier and Rey discuss the answers that have been proposed. For example:

These points and others in the essay are all well-taken and reasonable. But at the end of the day, it feels to me that a substantial puzzle remains. Sure, Brazil has promising economic prospects in the next few decades. But Brazilian investors have 98.6% of their equity investments in the Brazilian stock market? One wonders if, say, events in Europe over the last few years would be evolving differently if at least some prominent banks and investors had spread their money across Europe and around the world--not just keeping it in their own countries. While it's easy to list reasons why one might not want to overload one's portfolio with foreign investments, my sense is that many people use those reasons to justify their visceral discomfort with investing more abroad. Personally, I'm probably not as globally diversified as I should be, either.