Okun's law--which is really more of a rule of thumb--holds that for each increase of one percentage point in real GDP, the unemployment rate would fall by 0.3 percentage points. Arthur Okun formulated this rule in a 1962 research paper, called “Potential GNP: Its Measurement and Significance,” which appeared in the Proceedings of the Business and Economics Statistics Section of the American Statistical Association (pp. 98-103). It's available as a Cowles Foundation working paper here. Michael T. Owyang, Tatevik Sekhposyan and E. Katarina Vermann take a look at the current state of Okun's law as the U.S. economy struggles with sluggish growth and a frustratingly gradual decline in its unemployment in "Output and Unemployment How Do They Relate Today?" which appears in the October 2013 issue of the Regional Economist, published by the Federal Reserve Bank of St. Louis. They argue that Okun's law has actually held up quite well over time.

Consider first the evidence roughly as Okun would have seen it back in the early 1960s. This figure shows the  quarterly change in the unemployment rate and the quarterly growth rate in output from 1948-1960. Economic data series like GDP are updated over time, so this isn't quite the same data that Okun used. But it's close. Notice that the main pattern of the points is a downward slope: that is, a negative growth rates of GDP is correlated with a rise in unemployment, while a rise in GDP is correlated with a fall in unemployment. 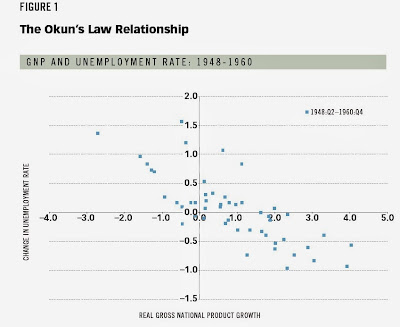 Now here is the same graph, but including all the quarters from 1948 up into 2013. Time periods are distinguished by the shape of the points: 1948-1960 is blue squares, 1961-2007 is black dots,  and 2008-2013 is red triangles. They estimate that the Okun's law relationship over this time is that, on average, a 1 percentage point rise in the growth rate of real GDP is associated with a 0.28 percentage point fall in the unemployment rate--almost exactly the same as what Okun found in 1962. 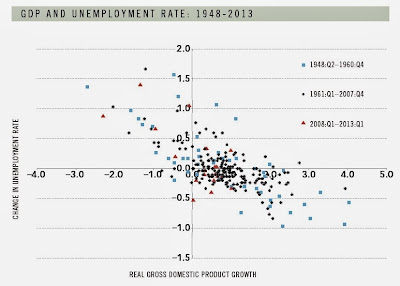