There are two main responses to concerns about the U.S. manufacturing sector: either the changes in manufacturing are mainly part of a long-run structural shift that goes back decades in the U.S. economy and is happening in high-income economies across the world, or there is something new and worrisome happening in the last decade or so.  Robert Z. Lawrence and Lawrence Edwards discuss "US Employment Deindustrialization: Insights from History and the International Experience," written as Policy Brief #PB13-27 for the Peterson Institute for International Economics.  They come down more heavily on the "long-run structural shift" side of the argument.

Serious discussion of the U.S. manufacturing sector is based on three claims:

1) If you measure the output of the U.S. manufacturing sector in terms of the value-added in that sector, there is no trend up or down in recent decades. As Lawrence and Edwards write: "Measured in 2005 dollars, manufacturing share of gross US output was 17.5 percent in 1947 and 17.3 percent in 2005. Between 1947 and 2005 the share averaged 17.3 percent and was essentially trendless ..." Value-added is calculated by taking the total revenues of a firm and then subtracting the value of purchased inputs of goods and services: thus, it includes not only profit but costs of labor and depreciation incurred by the firm itself in the course of production. 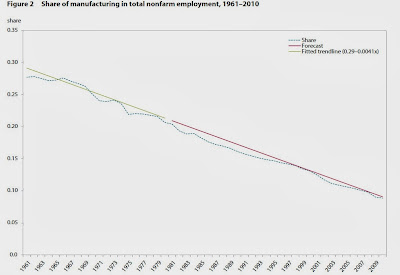 3) The manufacturing sector has a particular importance in any advanced economy. As Lawrence and Edwards write: "[M]anufacturing activity is strongly associated with economic growth, because manufacturing serves as the fulcrum of supply chains that combine and process raw materials and services to produce goods.1 In addition, the sector is among the most dynamic—accounting for about 70 percent
of US spending on business research and development—and it regularly outstrips the rest of the economy in productivity growth."

Lawrence and Edwards readily admit that trade makes a difference to the U.S. manufacturing sector, too. If the U.S. economy didn't run large trade deficits, they estimate that U.S. manufacturing jobs would be at a higher level--but such jobs would still be steadily declining over time at about the same rate. 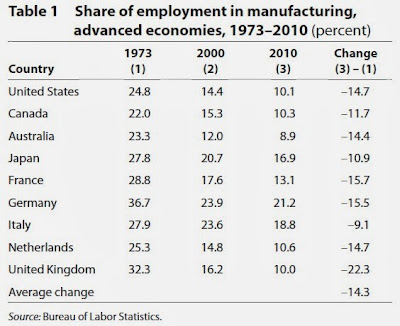 The drop in the share of consumption represented by goods is also common across these countries. 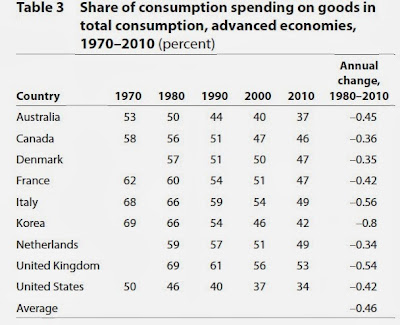 Finally, here's a post from about a year ago on a global manufacturing report from the McKinsey Institute that includes useful figures showing patterns of manufacturing output and jobs over time in different countries.
Posted by Timothy Taylor at 9:00 AM