There's an old saying that the problem with trying to be middle-of-the-road is that you get hit by traffic going both directions. Nonetheless, standing in the middle of those who argue vehemently that the budget deficits should be much smaller (because the recession ended in June 2009 and the deficits didn't help much in stimulating the economy anyway) and those who argue that the deficits should be much larger (because unemployment remains stubbornly high at 7.3% and a bigger deficit would help to reduce that rate), I actually think the budget deficit is about where it should be.

The Monthly Budget Review that Congressional Budget Office published on November 7 has an overview of the budget picture through Fiscal Year 2013, which ended on September 30. In the figure, federal spending and revenue are shown in the way I prefer--as a percentage of GDP. 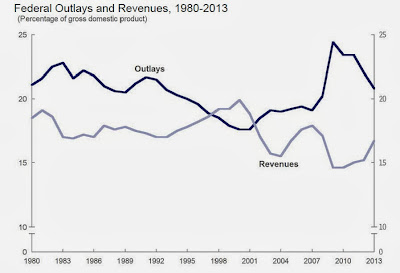 The story of fiscal policy since 1980 is encapsulated in these lines. For example, the Reagan tax cuts and spending increases that led to such large budget deficits in the 1980s are clear.

In the 1990s, there's a slow decline in federal spending (as a share of GDP) in the 1990s as defense spending fell and a growing economy reduced the need for income support programs. On the revenue side, Bill Clinton and the Democrats passed a tax increase in 1993 with no Republican votes at all, which together with the surge in tax revenues from the dot-com boom of the 1990s raised the federal tax take.

In the 2000s, tax revenue first falls with the end of the dot-com boom and the Bush tax cuts, and then rises with the construction and housing price bubble in mid-decade. Spending rises a bit in the early 2000s as a recession increases the need for government income support programs and the aftermath of 9/11 pushes up defense-related spending again.

When the Great Recession hits in late 2007, spending turns sharply up and tax revenue turns sharply down. In part, this change is built into government programs. When the economy slumps and income falls, tax revenues will drop automatically, too. Similarly, when the economy slumps more people become eligible for government support programs. These "automatic stabilizers," as they are called, will increase the deficit, and then additional tax cuts or spending increases will raise it further. (Here's a post about a CBO report from last March laying out what happened with automatic stabilizers during the recession.)

Naturally, when the recession ends and economic growth resumes--even sluggish and halting growth--the automatic stabilizers reverse themselves and the temporary fiscal stimulus packages come to an end. Tax revenues rise; spending falls. In fiscal year 2013, government spending was 20.8% of GDP, which was slightly above the average over the last 40-year of 20.4%. Federal government tax revenues were 16.7% in 2013, which was below the 17.9% from back in 2007 before the Great Recession and also below the 17.4% average over the last 40 years.

The budget deficit for 2013 was 4.1% of GDP. This is considerably lower than the gargantuan deficits from fiscal years 2009 to 2012 (which were 9.8, 8.8, 8.4 and 6.8% of GDP, respectively). But after four years of gargantuan budget deficits, this lower budget deficit for 2013 hardly qualifies as austerity. As I have pointed out before, the total rise in federal debt in recent years was, when expressed relative to GDP at the time, about twice the size of what happened with the Reagan deficits of the mid-1980s, substantially larger than the federal debt increase incurred during the Great Depression of the 1930s, and about two-thirds the size of the debt increase incurred to fight World War II.

The 2013 government budget deficit of 4.1% of GDP is smaller than in the immediate past, but given the recession ended more than four years ago in June 2009, and unemployment has gradually worked down from 10% in October 2009 to 7.3% at present, it seems to me appropriate that the deficit should be declining, too. Moreover, by historical standards a budget deficit of 4.1% of GDP isn't tiny. If one goes back before the Great Recession, it's still the the biggest annual deficit since the 1991-92 recession year or the Reagan deficits of the mid-1980s.

The long-term projections for  higher budget deficits, driven by an aging population and continually rising health care costs, are troubling to me. But as for right now, the overall budget deficit seems just about right to me.