US Adults Lag in Competence: The PIACC

How do America's working-age adults stack up against their peers from the other high-income countries around the world? The OECD has started a survey called the Program for the International Assessment of Adult Competencies to answer this question. In 2011-2012, a nationally representative survey of 5,000 Americans age 16-65 took the test, along with adults from 22 other countries. The U.S. Department of Education now published an overview of the results in "Literacy, Numeracy, and Problem Solving in Technology-Rich Environments Among U.S. Adults: Results from the Program for the International
Assessment of Adult Competencies 2012, First Look." The report was written by Madeline Goodman,
Robert Finnegan, Leyla Mohadjer. Tom Krenzke, and Jacquie Hogansee.

The PIAAC measures competence in several areas: literacy and reading components, numeracy, and problem solving in technology-rich environments. The evidence suggests that U.S. adults are below average in all of them. Here are three summary figures, for literacy, numeracy, and problem solving. The PIAAC average is shown, along with the US score. The unshaded bars above and below the US score are the countries with scores where the difference from the US score is not statistically significant. The shaded bars above and below show the countries where the scores are significantly different. 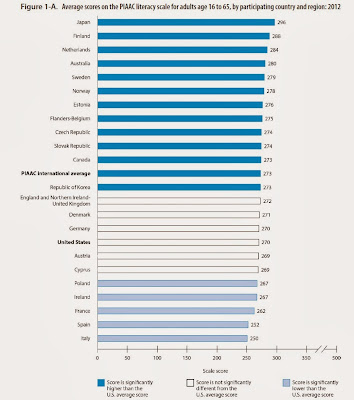 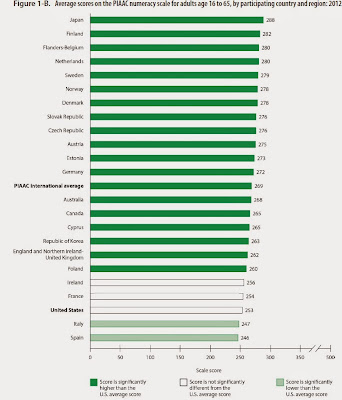 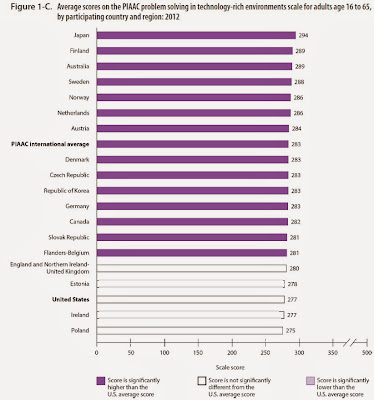 The OECD has also published its own first tabulation of these results, with much additional discussion, in OECD Skills Outlook 2013: First Results from the Survey of Adult Skills. It note that only three countries have below-average scores in all of these domains: along with the United States, the other two are Ireland and Poland.  In a fact sheet summarizing the US results, the OECD writes: "U.S. performance is weak in literacy, very poor in numeracy, but only slightly below average in problem solving in technology-rich environments." At the end of 2013, the OECD is scheduled to publish a follow-up study called "Time for the U.S. to Reskill? What the Survey of Adult Skills Says."

But in some ways, these dismal findings about the competencies of US adults should be no surprise to regular readers of this blog. The US high school graduation rate rose from 6% in 1900 to 80% in 1970--and then had essentially no increase for 30 years before edging up a bit in the last decade or so. In the late 1960s the US led the world in high school graduation rate, but by 2000, it was below the average of high-income countries. Similarly, the US used to lead the world in the share of population that went on to additional education after high school,  but now it is middle of the pack. The share of Americans age 25-34 with a tertiary degree is lower than for those who are age 35-64--by this measure, access to higher education is diminishing, despite the fact that the US  spending far more than one would expect on higher educationi based on the US level of per capita GDP.

A prominent report back in 1983 argued that the US was engaging in "unthinking, unilateral educational disarmament." The PIAAC evidence is a report card on the poor overall performance of the U.S. education system during the last four decades.