Martin Feldstein interviews Paul Volcker in the most recent issue of the Journal of Economic Perspectives. The interview ranges from the 1970s up to the present, and I commend it to you in full. But one of Volcker's comments in particular sent me scurrying to learn more. At one point in the interview, Volcker says: " I think we’re back, in a way, in the Triffin dilemma." And I thought to myself: "What the heck is that?"

Here's an discussion of the Triffin dilemma from an IMF website describing problems in the international monetary system from 1959 to 1971, before the Bretton Woods system of (mostly) fixed exchange rates cratered. The IMF states:


If the United States stopped running balance of payments deficits, the international community would lose its largest source of additions to reserves. The resulting shortage of liquidity could pull the world economy into a contractionary spiral, leading to instability. ... If U.S. deficits continued, a steady stream of dollars would continue to fuel world economic growth. However, excessive U.S. deficits (dollar glut) would erode confidence in the value of the U.S. dollar. Without confidence in the dollar, it would no longer be accepted as the world's reserve currency. The fixed exchange rate system could break down, leading to instability."

In short, the U.S. needs to run trade deficits, because the rest of the world wants to  hold U.S. dollars as a safe asset, and the way the rest of the world gets U.S. dollars is when the U.S. economy buys imported products. However, if U.S. trade deficits go on for too long or become too large, then the U.S. dollar might stop looking like a safe asset, which in turn could bring its own waver of global financial disruption. Here's how Volcker describes the Triffin dilemma in the interview:


"In the 1960s, we were in a position in the Bretton Woods system with the other countries wanting to run surpluses and build their reserve positions, so the reserve position of the United States inevitably weakened—weakened to the point where we no longer could support the convertibility of currencies to gold. Now, how long can we expect as a country or world to support how many trillions of dollars that the rest of the world has? So far, so good. The rest of the world isn’t in a very good shape, so we look pretty good at the moment. But suppose that situation changes and we’re running big [trade] deficits, and however many trillion it is now, it’s another few trillions. At some point there is vulnerability there, I think, for the system, not just for the United States. We ought to be conscious of that and do something about it."

Triffin laid out his views in a 1960 book called "Gold and the dollar crisis”, which is not all that easily available. But his 1960 Congressional testimony available here offers an overview. However, the Triffin dilemma as it exists today, in a world of flexible exchange rates, is not the same as it was back in 1960. (Of course, this is also why Volcker said that "in a way," we had returned to the Triffin dilemma.) Lorenzo Bini Smaghi, a member of the Executive Board of the European Central Bank, laid out some of the similarities and differences in 2011 in a talk, "The Triffin dilemma revisited."

Smaghi notes the arrival of flexible exchange rates, but argues that the biggest change affecting the Triffin dilemma is something else, the arrival of multi-directional capital flows and private sector capital flows in the global financial economy means that there are now lots of ways for other countries to get the U.S. dollars (or euros) that they wish to hold a safe asset, without the U.S. (or the euro area) necessarily running a trade deficit. Smaghi said:

Today, the United States and the euro area are not obliged to run rising current account deficits to meet the demand for dollars or euros. This is for two main, interlinked reasons. First, well-functioning, more liquid and deeply integrated global financial markets enable reserve-issuing countries to provide the rest of the world with safe and liquid financial liabilities while investing a corresponding amount in a wide range of financial assets abroad. The euro has indeed become an important international currency since its inception and the euro area has been running a balanced current account. In a world where there is no longer a one-to-one link between current accounts, i.e. net capital flows and global liquidity, a proper understanding of global liquidity also needs to include gross capital flows. Second, under BW [Bretton Woods] global liquidity and official liquidity were basically the same thing, but today the “ease of financing” at global level also crucially depends on private liquidity directly provided by financial institutions, for instance through interbank lending or market making in securities markets. Given the endogenous character of such private liquidity, global official and private liquidity have to be assessed together for a proper evaluation of global liquidity conditions at some point in time, and there is no endemic shortage of global liquidity, as the empirical evidence confirms. This is not to deny that temporary shortages can occur, as happened after the bankruptcy of Lehman Brothers in September 2008. But such shortages are a by-product of shocks and boom-bust cycles, not an intrinsic feature of the IMS [international monetary system], and can be tackled with an appropriate global financial safety net.

So has the Triffin dilemma been eliminated. Smaghi argues not. He points out that there is a growing and widespread demand for U.S. dollar holdings around the world from emerging market economies that want to hold U.S. dollar reserves as a hedge against sudden capital outflows or to keep their own currency undervalued, as well as from oil and other commodity exporters who prefer to hold their accumulated trade surpluses in the form of U.S. dollars. And when economic shocks occur, demand for these safe U.S. dollar assets can rise and fall in ways that threaten economic stability.
Triffin's policy solution, back in the day, was the creation of a global central bank that would issue a new "reserve unit" which central banks could hold as a safe asset, but would not be linked to gold or currencies. While Volcker doesn't endorse that approach, he also says that the way out lies in international monetary reform.  Smaghi discusses the possibility that the Triffin dilemma might be much reduced in a multi-polar international monetary system, where the U.S. dollar remains quite prominent, but those seeking safe assets and can turn to a variety of other currencies, too.

This discussion may seem abstruse, so let me pull it back to some headline economic statistics. There was once a time, not so very long ago, when many people used to worry about what would happen if the U.S. economy ran sustained and large trade deficits.  Through most of the 1960s and 1970s, the U.S. was fairly close to balanced trade. The first big drop in the U.S. trade deficit happened in the mid-1980s, but then trade deficits since the late 1990s have been just as big, or bigger, than back in the 1980s. Here's a figure showing U.S. trade deficits as a share of GDP since the time Triffin enunciated his dilemma up to the present. 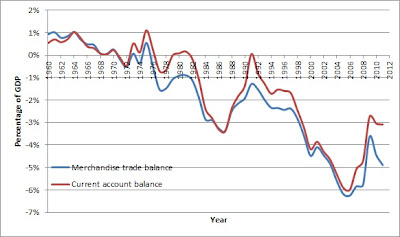 I suspect that the U.S. trade deficits in recent decades would have seemed almost impossibly large to Triffin and others back in 1960. But in recent decades, he rest of the world has wanted to hold trillions of U.S. dollars as a safe asset, and so the U.S. economy could import to its heart's content, send the U.S. dollars abroad and run enormous trade deficits. But at some point, the accumulation of U.S. trade deficits becomes so sustained and large that it will lead to economic disruption. As Paul Volcker says: "We ought to be conscious of that and do something about it."


(Thanks to Iva Djurovic for creating the trade deficit figure.)