The Dow Jones Industrial Index is based on stock prices of 30 large blue-chip companies that in some ill-defined way are supposed to represent the core of the U.S. economy. Over time, some companies are replaced by others. In September, for example, the formerly private investment bank Goldman Sachs replaced the public commercial bank Bank of America; the payments company Visa replaced the information technology company Hewlett-Packard; and the consumer clothing and gear company Nike Inc. replaced Alcoa Inc., which was traditionally an aluminum company but now has its finger in a various elements of design and manufacturing of parts, along with recycling. The changes seemed to me symptomatic of broader changes in the US economy, which made me look back at the companies in the Dow over time.

The first official Dow Jones Index was started in 1896, although Charles Dow had been putting out an earlier index, mainly of railroad stocks, as far back as the 1870s. Here, I'll just offer a few comparisons from more recent times. The companies in the Dow stayed unchanged from 1959 to 1976. The first column shows the list of Dow Jones index companies from that time period--call it roughly 40-50 years ago. The second column shows the companies in the Dow from 1994 to 1997, which is a little less than two decades ago. The third column shows the current list. These lists push me to think about how the US economy has been evolving. 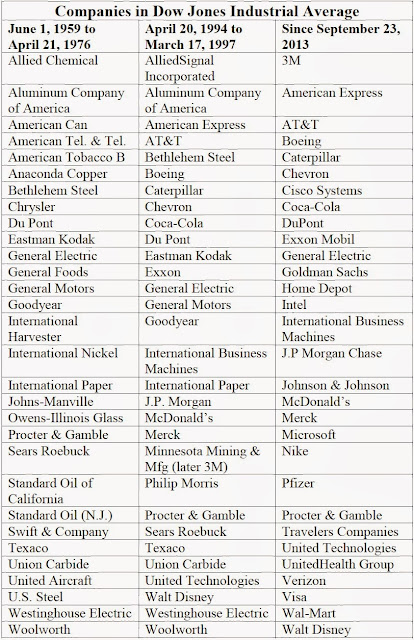 As a starting point, compare the 1959-1976 list to the present. There are only six companies on both lists: AT&T (which is of course a vastly different company now than when it was the monopoly provider of U.S. telephone services), DuPont, General Electric, and Proctor and Gamble, Standard Oil (N.J) became Exxon and eventually ExxonMobil, and United Aircraft became United Technologies. A number of companies involving metal are out of the index: Aluminum Company of American, Allied Can, Anaconda Copper, International Nickel, and U.S. Steel, as are companies focused on commodities like American Can, International Paper, and Owens-Illinois Glass.

The middle list is a snapshot of the transition between past and present. By my count, from the 1959-1976 up to the mid-1990s, about half of the 30 companies in the Dow (16 of 30) remained in some form, although several changed their names (Allied Chemical became AlliedSignal, Standard Oil (N.J) became Exxon, United Aircraft became United Technologies). Also, about half of the companies in the Dow in the mid-1990s (15 of 30) are no longer in the index at present. I don't claim to know what the "right" amount of turnover should be among top companies in a free-market society. But over the time frame of a few decades, the turnover is substantial.