When families get together for Thanksgiving and the holidays that follow, the structure of those families is different than a few decades ago. Jonathan Vespa, Jamie M. Lewis, and Rose M. Kreider of the U.S. Census Bureau provide some background in "America’s Families and Living Arrangements: 2012" (August 2013). In some ways, none of the trends are deeply surprising, but in other ways, the patterns of households set the stage for our political and economic choices.

As as starting point, here's a graph showing changes in households by type. Married households with children were 40.3% of all US households in 1970; in 2012, that share had fallen by more than half to 19.6%. Interestingly, the share of households that were married without children has stayed at about 30%.  Other Family Households, usually meaning single-parent families with children, has risen. Overall, the share of U.S. households that involve a family (either married or with children) was 81% back in 1970, but down to 66% in 2012. The share of households which are men or women living alone has risen. The figures are not the same across gender in part because of differences in older age brackets: "Nearly three-quarters (72 percent) of men aged 65 and over
lived with their spouse compared with less than half (45 percent) of women." 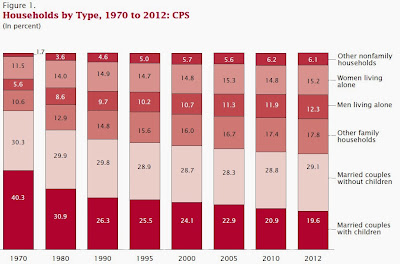 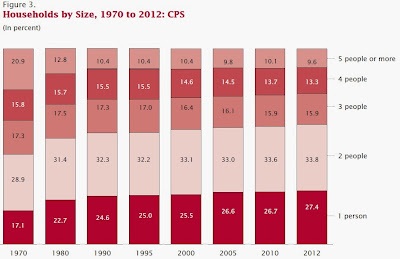 One of the hot topics in the last few years has been the subject of 20-somethings moving home to live in the parents' basement. This pattern is visible in the Census data, but it's less striking over time than I might have thought, and the pattern started before the onset of the recession. (The data in the early years of this figure come from different statistical surveys than the post-1983 data, so one shouldn't make too much of what appears to be a jump from 1980 to 1983.) My guess is that as the share of students enrolling in higher education has risen over time, some share of the rise in 18-24 year-olds living at home is represented by college students. 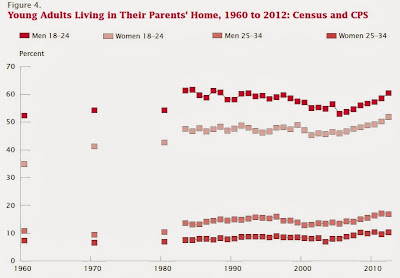 Finally, it's worth noting that one-quarter of all US children are being raised in single-parent households. On average, these households are below-average in income, and with one parent at home, they are on average less able to provide hours of time at home. 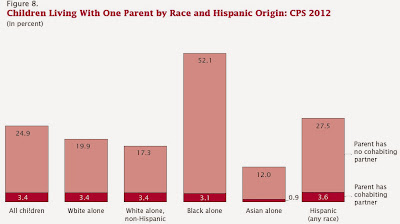 The structure of households shapes politics and economics. For example, a greater share of adults living alone means a shift in the housing supply away from big houses and toward apartments, and makes it more likely that these single-person households will locate in or near cities rather than in suburban houses. A smaller share of households with children means that when governments set priorities, support for schools will be lower. Households are also a way of sharing risk: a household with two adults has more possibilities for sharing the risk of job loss, or sharing the risk that time needs to be spent dealing with sickness or injury. Therefore, the growth in single-person households tends to mean increased support for social methods of sharing risk, including government programs that support unemployment insurance or health insurance.  To some extent, we are how we live.