The Conundrum of EITC Overpayments (and the Health Insurance Exchanges)

Just to be up-front, I'm a long-time fan of the Earned Income Tax Credit. Other government programs to assist those with low incomes can easily discourage work. Imagine that every time a low-income person earns $1, they lose roughly $1 worth of benefits in welfare payments, food stamps, housing vouchers, maybe even losing their Medicaid health insurance. As a result, the incentive to work is dramatically reduced: for earlier posts with details on how this works in practice, see here and here. But with the EITC,  when low-income household (especially those with children) earn income, the federal government pays them an additional tax credit based on their earnings. Thus, the EITC is a reward for working, not a payment conditional on not working.
Here's a nice readable overview of the EITC , from the Center on Budget and Policy Priorities.

But the EITC does have a long-standing problem: a report from the Treasury Inspector General for Tax Administration estimates that about one-fifth of all EITC payments are made to those who don't actually qualify for them. In 2012, the EITC had $11.6 to $13.6 billion in overpayments in 2012. Or if you want to look back over time, an accumulation of $110 billion to $132 billion over the decade from 2003-2012. 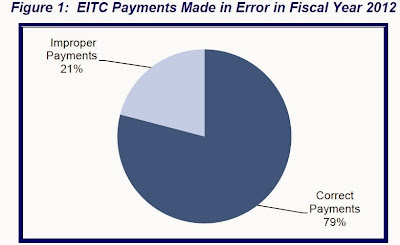 The report is "The Internal Revenue Service Is Not in Compliance With Executive Order 13520 to Reduce Improper Payments" [August 28, 2013, #2013-40-084]). President Obama signed Executive Order 13520 on November 20, 2009, which sought to increase the accountability of federal agencies to reduce improper payments. But as TIGTA reports, the IRS has not succeeded reducing these EITC overpayments. On the other side of the coin, TIGTA writes, "The IRS estimates that the participation rate for individuals who are eligible to receive the EITC is between 78 and 80 percent."

Why is this problem so difficult? And if the federal government runs the EITC with a 20% error rate, what are the chances it can run the health care exchanges more effectively?

Here's the EITC enforcement conundrum: The program is spending 20% or so of its funds on millions of households those who aren't eligible, while not reaching millions of households who are eligible. But the amounts for any given household are small. The CBPP summary mentioned above writes: "During the 2010 tax year, the average EITC was $2,805 for a family with children and $262 for a family without children." In addition, low-income people are moving on and off the program all the time. TIGTA writes: "Studies show that approximately one-third of EITC claimants each year are intermittent or first-time claimants." It notes that some of the cases of EITC overpayment are just plain fraud, sometimes aided and abetted by those who prepare taxes. About two-thirds of tax applications that claim the EITC are filled out by outside preparers. But there are also lots of gray-area situations where the complexity of tax law and the EITC provisions, and general confusion makes it uncertain whether someone is eligible.

It won't make economic sense for the IRS to hire a bunch of well-paid tax auditors to delve into the complex and incomplete financial records, home lives, and tax returns of millions of low-income families, hoping to recover a few hundred or even a couple of thousand dollars per family. Thus, the TIGTA report argues: "The IRS must develop alternatives to traditional compliance methods to significantly reduce EITC improper payments." The IRS has made some efforts to communicate the law more clearly to paid tax preparers. But as TIGTA reports, "the IRS has made little improvement in reducing improper EITC payments as a whole ..."

The federal government can do some large-scale programs pretty well. For example, it sends out Social Security checks in a cost-effective manner. With more of a paperwork struggle, it manages to cope with annual tax returns and Medicare and Medicaid payments to health care providers.

But the EITC is a program that involves complex rules for eligibility and size of payments, much more complex than Social Security. The EITC is aimed at low-income people, many of whom have economic and personal lives that are in considerable flux and many of whom have limited ability to deal with detailed paperwork, unlike the health care providers who receive Medicare and Medicaid payments. The envisioned health insurance exchanges are likely to end up serving many more people than the EITC. The complexity of decisions about buying health insurance is greater than the complexity of qualifying for cash payments from the EITC. When people's eligibility for subsidies is moving and changing each year, as it is for the EITC and will also be for the health insurance exchanges, it will be difficult for the federal government to sort out eligibility. And as the complexity of the rules rises, it will spawn a network of people to help in filling out the forms, most of whom will be honest and forthright, but some of whom will focused on making people eligible for the largest possible subsidies, with little concern for legal qualifications.

I remain a fan of the EITC, but I confess that as a matter of practical administration, I'm not at all sure of how to substantially reduce its persistent problem of overpayments in a cost-effective manner. Part of the answer probably involves finding ways to simplify the rules and the interface with recipients, so that eligibility can be more clear-cut. In addition, I suspect that practical problems that cause a mix of over- and underpayments for the EITC will be dwarfed by the practical problems and error rates in deciding about eligibility for subsidies in the health insurance exchanges--even if or when the web interface itself becomes functional.