Breakdown of US Corporate Profits

Although the US corporate income tax is an almost continual subject of dispute, most people don't know any details about what kinds of corporations that earn the profits. For example, are the companies earning profits disproportionately large or small? What industries earn the most in profits? How much corporate profit falls outside the corporate income tax, because it is earned by "Schedule S" corporations which distribute profits to their owners, instead? The IRS has just published its 2012 Corporation Income Tax Returns Complete Report. The report offers voluminous tables with lots of detail on these questions, but here's the big-picture overview. (I've trimmed down the tables below from the form in which they appear in the report--for example, leaving out data for 2011.)

For starters, how big were corporate profits in 2012, and how do the profits earned and the corporate taxes paid break down by size of firm? Here's the table from the report. In 2012, the US economy had 5.8 million active corporations. Their total receipts were $29.4 trillion. (This amount is larger than GDP! But remember that in the process of production, companies sell to other companies: for example, a mining company sells iron to the steel company, which sells steel the car company, which sells the car to a consumer. The price of the car is included in GDP, because it includes all the earlier stages of production. But if you just add up company receipts, you add up the receipts of the mining company, the steel company, and the car company. Of course, in the real-world many production processes involve a lot more than three steps.) Total corporate income in 2012 was nearly $1.8 trillion. However, after subtracting out deductions for past losses, and other deductions, taxable corporate income was about $1.1 trillion. The tax owed on that amount was $402 billion. However, after subtracting out tax credits--credits for foreign taxes paid, credit to holders of tax credit bonds, qualified electric vehicle, general business, and prior-year minimum tax--the actual income tax owed was $267 billion.

How do the profits earned and the corporate taxes paid break down by size of companies? I'll just note that the roughly 3,000 largest firms, those with assets of $2.5 trillion or more, account for more than half of all corporate receipts (51%), for about two-thirds of all profits before deductions and credits (67%), and for about 70% of all corporate income taxes paid after deductions and credits. Readers can of course play around with the various categories in the table as they like.

What industries paid the most in corporate income tax in 2012? Out of the total of $1.7 trillion in pretax profits (before deductions and credits), about 80% can be traced to four sectors: finance and insurance (29% of total pretax profits), manufacturing (29%), wholesale and retail trade (15%), and management of companies (holding companies) (7%). 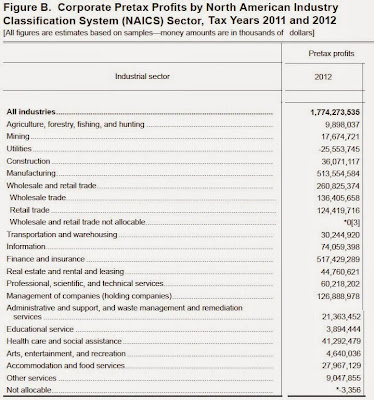 Finally, not all corporations pay corporate income tax. Some corporations pass their profits each year to their owners. For example, regulated investment companies pass profits to owners, and so do "S corporations." Out of the $1,774 billion in profits, before deductions and credits, a full $678 billion (38% of the total) happen in these pass-through forms, which are applying to a larger share of corporate profits over time.