The Rise of Remittances

The total number of migrants working in other countries worldwide is now approaching 250 million. Many of them send money home, and remittances are on their way to becoming an important part of the global financial system. The World Bank Migration and Remittances Team, Development Prospects Group, offers an overview in its Migration and Development Brief of April 13, 2015. 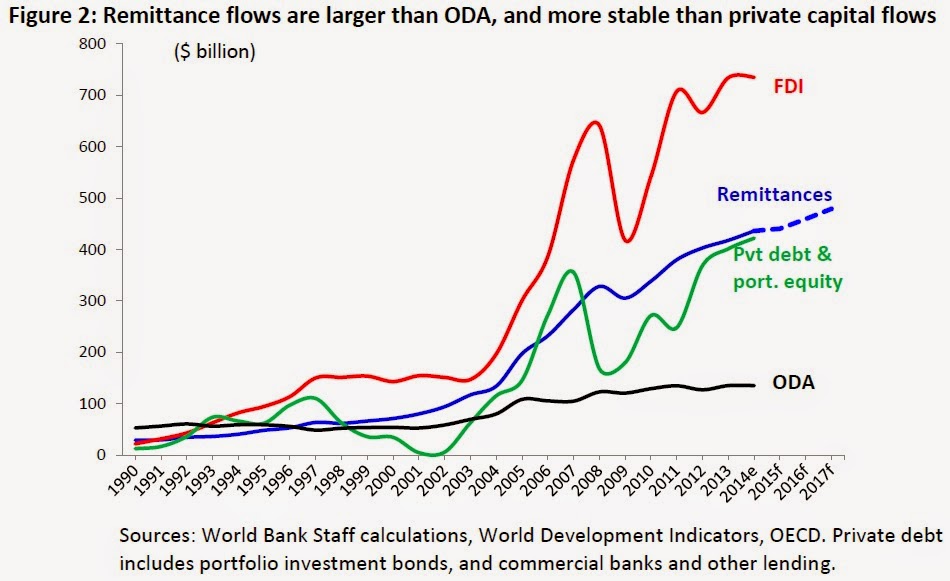 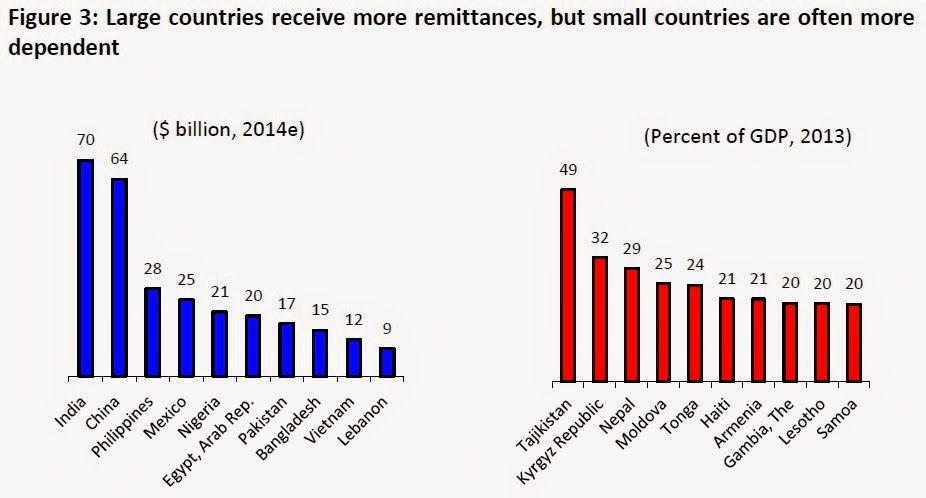 Remittances are important for their sheer size, and because they offer a way for extended households and kinship networks in low-income countries to help themselves in a direct way. They are also goign to be a subject of policy.

For example, the World Bank estimates that at present, transferring $200 to a recipient country on average incurs a fee of about 8%. It seems plausible that technology and the growth of these markets should be able to reduce this cost substantially. If the cost of transfers could be cut to 3%, OECD estimates that it would benefit the recipients of these remittances by $20 billion per year. The key question here is that making international flows of capital cheaper and easier comes into conflict with the policy agenda of avoiding money-laundering and cutting off financial assistance to terrorist groups.

Another possibility is that low-income countries will issue bonds in their own currencies, hoping to attract investment from those with remittances to send. The World Bank researchers explain: "A diaspora bond – a low denomination security with a face value of $1,000, say, carrying a 3-4% interest rate and 5-year maturity – issued by a country of origin could be attractive to migrant workers who currently earn near-zero interest on deposits held in host-country banks. Diaspora bonds could be used to mobilize a fraction – say, one-tenth – of the annual diaspora saving, that is, over $50 billion, for financing development projects." India and Israel have already taken steps along these lines, but many low-income countries around the world could give it a try.

A more complex step is to use the expected inflow of future remittances as collateral, in what is known a "future-flow securitization of remittances"--which can then lead to lower borrowing costs or longer borrowing terms for governments of developing countries.

For a more detailed overview of the economics of this subject, I recommend Dean Yang's article on  "Migrant Remittances" in the Spring 2011 issue of  the Journal of Economic Perspectives. (Full disclosure: I've labored in the fields as Managing Editor of JEP since the first issue in 1987.)
Posted by Timothy Taylor at 7:00 AM