The single largest federal program for providing cash assistance to those with low incomes is the Earned Income Tax Credit, which in 2014 reduced taxes owed by the working poor by about $3.6 billion while transferring to those households an additional $60.8 billion (according to Table 14-1 in the Analytical Perspectives volume of the proposed US budget. This isn't as much as programs with non-cash benefits, like Food Stamps and Medicaid. But it's more than what is spent on welfare, or on the Supplemental Security Income program for the low-income disabled and elderly. In "Earned Income Tax Credit in the United States," which appears in the Journal of Social Security Law (2015, 22:1, pp. 20-30), Elaine Maag provides a useful overview of the program.

For economists, the big selling point of the EITC is that it rewards work. The classic problem that arises when government provides assistance to those with low income levels is that as a person works to earn an extra $100, they often find that the government benefits are then reduced by nearly that same amount or sometimes even more. As a result, many low-income people who work are saving the government some money, but not much increasing their actual after-benefits, after-taxes standard of living. In contrast, the EITC is set up so that the work disincentives are greatly reduced. Maag offers a graph familiar to those who know the program that shows how it operates. 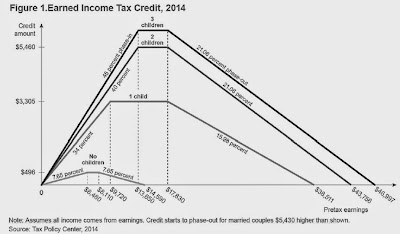 The different lines in the graph represent single-earner families with different numbers of children. Maag explains the situation for a family with one child:


"In 2014, a family with one child was eligible for a subsidy of 34 cents for each dollar earned up to $9,720—a maximum credit of $3,305. A family qualified for the $3,305 credit until its income reached $17,830. At that point, the EITC declined by almost 16 cents for each additional dollar of earnings; the credit phased out completely once earnings reach $38,511 (figure 1). Larger credits are shown for families with more than one child, as well as the small credit available to a family with no custodial children."

Thus, a low-income person with one child who starts working gets a bonus of 34 cents on the dollar up to a certain level of earnings--which helps to offset their declining eligibility for other government benefits. For this family, the credit does phase out above $17,830 in income, so each $1 earned above this amount means that the amount of the credit falls by about 16 cents. This represents a lower incentive to work--but losing only 16 cents in benefits for every $1 earned is a lot better than losing, say $1 in benefits for every dollar earned. And any means-tested program has to be phased out in some way as income levels rise. Along with the federal EITC, 23 states have also added their own versions of the EITC to their state-level income tax codes.

Maag reviews the empirical evidence that the EITC does seem to encourage greater levels of work participation in the phase-in range, although it doesn't seem to have much effect on average hours worked and doesn't do much to discourage work hours in the phase-out range. She writes (footnotes omitted): "The official measure of poverty in the US does not include changes in resources due to taxes. If it did, scholars have determined that the EITC wouldhave been credited with lifting 6.5 million people out of poverty in 2012, including about 3.3 million children. Changes in income as a result of the EITC are associated with better health, more schooling and higher earnings in adulthood."

Overall, I think one can make a plausible case for a dramatic increase in the amount spent on the EITC. But honesty compels me to point out that the EITC has two well-known shortcomings and problems that need to be mentioned.


These issues don't have neat and tidy answers, but they do have messy and practical answers.
Posted by Timothy Taylor at 7:00 AM