Only a few countries around the world have gone so far as to "dollarize" their economy--that is, using  the US dollar as a predominant legal currency. According to an IMF characterization of exchange rate regimes, the dollarized economies include some small island nations with close historical or economic ties to the US, but also Ecuador, El Salvador, Panama, Timor Leste, and Zimbabwe. However, in a number of other countries the US dollar plays a very substantial role in bank deposits and lending. The IMF has been offering some comments and reports on the tradeoffs of dollarization, often with a strong hint that it might be beneficial to do less of it. For example, Naoyuki Shinohara
Deputy Managing Director of the IMF, made these comments in a February 2015 conference:


[M]any Frontier and Developing Asian economies are also highly dollarized. In some cases, high dollarization can facilitate trade. But there are drawbacks, such as limiting exchange rate flexibility to mitigate against external shocks, and constraining the central bank’s ability to be the lender of last resort. Under such circumstances, consideration could be given to actively promote de-dollarization. But de-dollarization is a long process and requires a commitment to strengthen policies and institutions.

An IMF staff team led by Mauro Mecagni and Rodolfo Maino has published a May 2015 report on "Dollarization in Sub-Saharan Africa: Experience and Lessons." Along with specific information about the extent of dollarization across this region--other than the official dollarization of Zimbabwe--the report does a nice job of reviewing the tradeoffs involved.


Although dollarization arises as a response to economic problems, it brings tradeoffs of its own. A dollarized economy by definition has no control over its own monetary policy--and there is no particular reason to think that decisions made by the US Federal Reserve will suit the economic needs of  other countries. A dollarized economy is also vulnerable to rises and falls in the exchange rate of the US dollar. A particular problem can arise in a partially dollarized economy when the government, or large banks and firms, have borrowed in US dollars, planning to receive funds in the local currency of the country, convert to US dollars in the foreign exchange markets, and repay the US dollar loans. If the exchange rate moves sharply, it can become impossible to repay those US dollar loans (a dynamic that was one of the roots of the East Asian financial crisis in 1998).

The IMF study chooses a threshold in which if the ration of a foreign currency deposits to total deposits is more than 30%, an economy is said to be "dollarized." Here's the picture for sub-Saharan Africa as of 2012, with the extent of dollarization shown as a share of bank deposits and a share of bank loans. Moving clockwise from east to west, an arc of countries including Angola, Congo, Uganda, Tanzania, and Mozambique are relatively heavily dollarized. 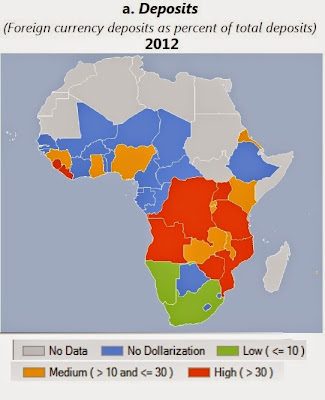 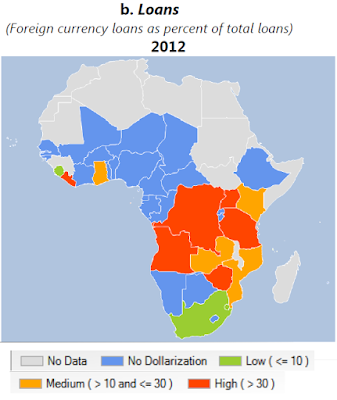 The IMF researchers look for past examples of de-dollarization in recent decades, including Israel, Poland, Bolivia, Peru, and Angola. Overall, they sum up the de-dollarization efforts in this way:


Experience also shows that dollarization is often difficult to reverse. While the use of a foreign currency as a store of value or for domestic transactions has increased sharply in several countries over time, there are fewer cases in which this trend has been significantly reversed. Memories of macroeconomic instability and hyperinflation—the key factors that encourage dollarization—do not wither away easily, encouraging economic agents to maintain foreign currency denominated assets even when macroeconomic conditions have stabilized and policy credibility has been established.

As one might expect, the main steps to reduce dollarization focus on controlling inflation and achieving macroeconomic stability, so the main incentives behind dollarization are reduced. Passing laws and regulations to outlaw dollarization doesn't tend to work well; it only emphasizes the desperate problems of the local currency, thus making dollarization look more attractive. But the IMF team points out that when a country has its macroeconomic fundamentals under control, it can also nudge its economy along the de-dollarization trajectory in other ways. For example, it can set financial regulations for local banks that require them to take the foreign exchange risks of lending in US dollars into account--which pushes the bank toward holding more reserves and doing more lending in the local currency.

In a globalized economy, banks and firms in all countries are going to be involved in foreign currency exchanges. There can be a reasonable economic case for similar nearby countries to link their currencies together. But when dollarization becomes highly prominent, it's typically a signal that the government's economic policies are mistrusted or incompetent or both.