During my adult life, the main source of immigration to the U.S. has always been Mexico. Thus, I was surprised to see that for 2013, immigration from China and India exceeded that from Mexico. The data comes from analysts at the US Census Bureau, Eric B. Jensen, Anthony Knapp, C. Peter Borsella, and Kathleen Nestor, and presented at a recent conference under the title, "The Place-of-Birth Composition of Immigrants to the United States: 2000 to 2013."

Here's a takeaway figure. It's a measure of those who are foreign-born, and who were living outside the US a year ago--in other words, it's a measure of migration to the US in the previous year. 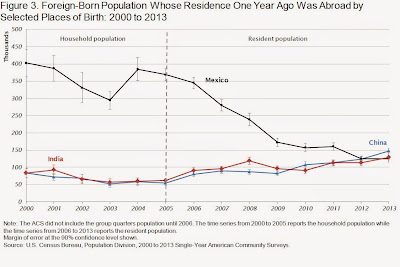 As I have noted in the past, immigration from Mexico has dropped off substantially in the last few years. Indeed, a few years ago when the U.S. unemployment rate was still so elevated in the aftermath of the Great Recession, net migration from Mexico to the U.S.--that is, new arrivals minus departures--may have been slightly negative. Over the last decade or so, a combination of stronger enforcement at the border, along with a gradually stronger economy in Mexico and fewer children per women in Mexico have meant fewer young people on the move looking for work.

The data here comes from the American Community Survey. It asks people about whether they were in another country the year before. It does not ask whether they are legal or illegal immigrants. If undocumented immigrants are less likely to answer such surveys, they will be undercounted. While the point surely has some truth, it's also true that the ACE is often used together with a variety of other measures (including US and Mexican Census data) as part of inferring the number of undocumented immigrants. Precisely because the survey does not ask about legal or illegal immigration status, many undocumented migrants do seem to fill it out accurately.

The Census Bureau economists also offer some interesting observations about the demography of these migrant groups.

Concerning China: "Initially, immigrants born in China were concentrated around the 20-29 age group. Also, there was a relatively high percentage of females relative to males in the 0-4 age group.  More recently, the age structure is concentrated around the college-aged populations, with the largest percentage point increases in the 15-19 and 20- 24 age groups for both males and females."

Concerning India: "Most immigrants born in India are concentrated in ages 20-34, with the largest percentage in the 25-29 age bracket. This is consistent for both males and females."
Posted by Timothy Taylor at 7:00 AM