Even good intentions can have unexpectedly mixed results. Used clothing that is donated to charity in high-income countries often ends up being passed along to low-income countries. In turn, the textile and clothing industries in those countries often can't compete with these imports, and end up contracting. Andrew Brooks tells the story in his new book Clothing Poverty: The Hidden World of Fast Fashion and Second-hand Clothes. For those who would like a shorter version, Brooks has authors a couple of short and readable overview articles on March 20, 2015, in Geographical, and on February 13, 2015, in the Guardian.

Basic statistics on exports of used clothing are available from US and UN sources. The US Department of Commerce website reports that in 2014, US exports of "Worn clothing and other worn articles," item 6309.00, totaled 774 million kilograms in 2014, with a value of $710 million. The United Nations Comtrade data on "Worn clothing and other worn textile articles; rags 269" shows that worldwide exports in this area rose from $1.5 billion 2000 to $5.1 billion by 2013. As one would expect, a certain amount of this used clothing is moving between nearby high-income countries: say between the US and Canada, or between European Union countries. But a sizeable share also makes its way from high-income to low-income countries. Here are the UN numbers of main importers and exporters in the "worn clothing" category. 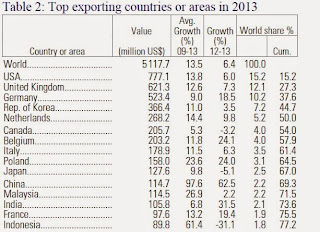 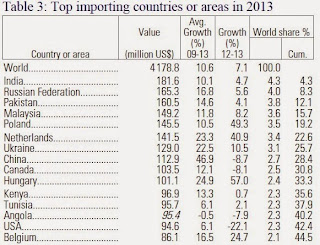 The main source of contention arises when clothing from high-income countries like the US and the UK ends up in low-income countries. A substantial amount of this used clothing ends up in the hands of companies like the Trans-Americas Trading Co., which buys clothing from charities and reports on its website: "Approximately eight out of ten pounds of clothing collected by large charitable institutions are sold to recyclers in order to generate revenue for their charitable programs." Here are a couple of images from the Brooks posting on Geographical.  The first shows what happens to some of the used clothes when given away in the US and the UK.

Brooks reports that about one-third of all globally donated clothes end up in Africa, where most of them are not donated, but instead are re-sold. The next image shows some of the effects of this used clothing in various nations of sub-Saharan Africa.

In a number of African countries, the presence of used clothing has become so prominent in the markets that it has a local slang name. Here are a few examples, as reported by Brooks:

There are some legitimate quandaries here. On one side, many of the charities in high-income countries that ask for donated clothing, and then end up selling that clothing to dealers like Trans-Americas Trading Co., are doing good things with the money they raise. Clothing that is passed along to others doesn't end up in a landfill someplace. It's quite plausible that those who wear end up wearing the donated clothing didn't have more cost-effective options. On the other side, there is some severe irony in this global trade in secondhand clothing.

On the other side, the textile industry like so many others is dramatically shifting toward greater mechanization and use of industrial robots, even in low-income countries. Thus, it's not altogether clear that textiles offer the same path to a substantial number of jobs or a growing manufacturing sector that it once did. And it seems unlikely that textiles are going to be one of the hot new growth industries of the future. For low-income countries, looking for opportunities in other industries may well be the wiser long-term choice.