Improving the Health of US Children

"A large volume of high-quality research shows that unhealthy children grow up to be unhealthy adults, that poor health and low income go hand in hand, and that the consequences of both poverty and poor health make large demands on public coffers. Thus promoting children’s health is essential for improving the population’s health; policies to prevent children’s health problems can be wise investments; and policy makers should implement carefully designed policies and programs to promote child health." Thus say Janet Currie and Nancy Reichman in their introductory essay to the Spring 2015 issue of Future of Childen, which features eight other articles on the theme of "Policies to Promote Child Health."

Sara Rosenbaum and Robert Blum lead off with an essay, "How Healthy Are Our Children?" Here's a thought-provoking table of the main causes of child mortality in the US a century ago, as compared with today. The entries of the table for a century ago help to define some past successes, while the entries for the present point to current challenges. 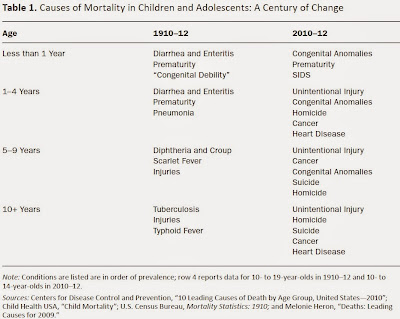 An overall shift seems clear. Infectious diseases are down. Injuries, homicide and suicide have taken their place near the top of the list. These conditions help to make clear that the modern health problems of American children are mostly about broader conditions of health and safety, which in turn are often correlated with family income and measures of socioeconomic status. The chapter in the Future of Children issue summarize the evidence that does exist about factors that are correlated with child health. Here's a sampling from Rosenbaum and Blum write (footnotes omitted):


Specifically, we have come to understand that many disease conditions—and especially noncommunicable conditions— result from interactions between individuals and their environments. ...  In the Adverse Childhood Experiences Study (ACES), researchers showed an association between child abuse and being reared in dysfunctional households, on the one hand, and later adult health, on the other. Since then, research has documented strong associations between adverse childhood experiences and adult cancers, sexually transmitted infections, ischemic heart disease, and hepatitis. In fact, children who have adverse childhood experiences show a risk of subsequent disease approximately two to four times as high as children who did not have such experiences. Researchers define adverse childhood experiences to include psychological/ physical/ sexual abuse, exposure to substance abuse, mental illness, exposure to maternal violence, and exposure to parental criminal behavior. In their research sample, drawn from a large HMO in Southern California, ACES researchers found that one in four adults reported two or more such experiences, while 11 percent of those 50 years of age or older reported four or more. For adults of any income level, early adverse childhood experiences have profound effects. Poverty not only increases the risk of having such experiences, but also reduces the availability of protective factors (for example, nurturing adults) that can buffer the impact of exposure. Exposure to social toxins in childhood alters the developing brain and can have adult consequences. Today we understand that brain development extends well into the third decade. Exposure to toxic environments — what researchers call toxic stress— alters brain architecture in developing children by chronically increasing cortisol, a stress hormone; this, in turn, reduces brain development, producing a less complex brain scaffolding. The result is reduced capacity for reasoning, stress reactivity, decision making, and learning. ...

Today, the primary health problems that children and youth face are noncommunicable conditions that not only adversely affect health and development but also act as precursors of noncommunicable disease in adults. These conditions arise from both lifestyle behaviors and the social environments in which our most vulnerable children live. ... The neighborhood in which a child is born and grows up can have an important impact on the risk of illness or death, as well as life expectancy. Neighborhoods are highly correlated with both family income and a host of environmental exposures (for example, violence, unsanitary conditions, environmental and social toxins). One important factor is residential segregation, which continues to be pervasive in American life. ...

Elsewhere in this issue, Maya Rossin-Slater demonstrates substantial disparities in birth outcomes by maternal education, which is a commonly used measure of socioeconomic status. Using data from the 2012 National Health Interview Survey (NHIS) to look at marker childhood health conditions associated with lower income and adverse community health conditions, we can also see an association between the incidence of poorer health and populations at heightened risk of poverty and deprivation, including members of racial and ethnic minorities—particularly non-Hispanic blacks. ... There was a strong and positive correlation between parental income and children’s positive assessment of their health; while nearly 90 percent of children at the highest income levels reported excellent health, only 46 percent of those living in poverty did so. ... Two researchers recently presented nationally representative statistics from the National Health and Nutrition Examination Survey that connect indicators of poor child health to household income. Obesity, hypertension, diabetes, low high-density lipoprotein cholesterol (HDL, known as “good cholesterol”), and high cholesterol ratio were measured through physical examinations and/or laboratory reports. Their figures indicate clear income gradients in children’s health across all measures other than diabetes. ...

Overall, the state of this debate seems to be that there are lots of studies showing factors that are correlated with greater risks to childhood health, and there are a growing number of studies showing the long-term benefits from taking steps to reduce these risk factors. But these studies haven't really been pulled together to form a cohesive whole, or to have a sense of what the top public priorities should be.  Currie and Reichman write in their introduction: "We suspect that, for many dimensions of child health, an ounce of prevention would be worth a pound of cure, but it’s difficult to prove this without hard evidence on the costs and benefits of different approaches."