There's a well-known story about how a long-ago head of the US Patent Office supposedly proposed that it was time to shut down the patent office, and said something like:  "Everything that can be invented has been invented." The story seems implausible on its face: after all, who would be appointed to run the patent office, or who would take the job, believing that invention was about to become obsolete? Nonetheless, the story seems to have appeared in two incarnations: one citing Henry L. Ellsworth, who was the first commissioner of the US Patent Office from 1835-1845, and Charles Duell, who was commissioner from 1898-1901.

A first debunking of this story appears in an article by Eber Jeffrey called "Nothing Left to Invent," which appeared in the Journal of the Patent Office Society in 1940 (vol. 22, pp. 479-481, available through the magic of online inter-library loan). Jeffrey writes:


Numerous versions of the story appear. A discouraged examiner is said to have declared in his letter of resignation, that there was no future for the inventor; a Congressman favored termination of the functions of the Patent Office since the time was near at hand when such functions would serve no purpose; and an eminent Commissioner of Patents retired almost a century ago, offering as his reason the view that the limits of human ingenuity already had been reached.  This last variant is told of Commissioner Harry L. Ellsworth, who resigned on the first day of April, 1845.

As Jeffrey points out, there is nothing in Ellsworth's resignation letter (which he reprints) showing any belief that the Patent Office was soon to be obsolete. However, one can find a phrase in one of Ellsworth's earlier reports which suggests he might have held such views. Ellsworth wrote a ten-page introduction to the 1843 Annual Report of the Commissioner of Patents (magically available online), which on p. 5 contains a one-sentence paragraph which reads:


"The advancement of the arts from year to year taxes our credulity, and seems to presage the arrival of that period when human improvement must end."

However, in the contest of his report, this phrase doesn't read like a prediction that human improvement is about to end. It reads like a sign of wonder about how much technical improvement is in fact happening, beyond what seems imaginable. As Jeffrey summarizes it in the 1940 essay:


Ellsworth did not elaborate on this statement. The content of the whole report, though, surely indicates that he did not think the end of "human improvement" was immediately at hand. He recommended that Congress provide for additions to the Patent Office building and asked for more equipment. He showed that great scientific progress was to be expected in the use of electricity, particularly for the telegraph and for railroads. He pointed out that important forward steps had been taken and were to be expected in medicine, in sugar refining, in the manufactures of textile, leather, and iron products. He anticipated a great variety of improvements in agriculture. Ellsworth probably did more than any other Commissioner to promote scientific farming while the agricultural bureau was a unit in the Patent Office. From these considerations it seems that Henry L. Ellsworth could not have felt that the end of progress in the mechanic arts was near. It is much more likely that the statement in question, probably an unfortunate one, was a mere rhetorical flourish intended to emphasize the remarkable strides forward in inventions then current and to be expected in the future.

Charles Duell was the US Commissioner of Patents from 1898 to 1901. Stephen Sass, who was a librarian for a division of General Motors, told Duell's story for a magazine called the Skeptical Inquirer (Spring 1989, pp. 310-313). Sass writes:


This new story surfaced in the fall of 1985, when full-page advertisements sponsored by the TRW Corporation appeared in a number of leading periodicals, including Harper and Business Week. These ads had as their theme "The Future Isn't What It Used to Be." They contained photographs of six individuals, ranging from a baseball player to a president of the United States, who had allegedly made wrong predictions. Along with such statements as "Sensible and responsible women do not want to vote," attributed to President Cleveland, and "There is no likelihood man can ever tap the power of the atom," attributed to physicist Robert Millikan, there is a prediction that was supposedly made by Commissioner of the U.S. Patent Office Charles H. Duell. The words attributed to him were: "Everything that can be invented has been invented." The date given was 1899.

When Sass contacted TRW to find a source for the quotation, they pointed him to a couple of quotation books. The second quotation book cited the first one, and the first one had no link to a primary source. The 1899 Annual Report of the Commissioner of Patents (available online) is available online, and the quotation does not appear there. However, one does find a number of comments about the growth of patents and recommendations for legislation to improve the patent office. At the end, Duell writes: "May not our inventors hopefully look to the Fifth-Sixth Congress for aid and effectual encouragement in improving the American patent system?" Just before that, Duell quotes with evident approval a then-recent comment from President McKinley, who said in his annual message on December 5, 1899: "Our future progress and prosperity depend on our ability to equal, if not surpass, other nations in the enlargement and advance of science, industry, and commerce. To invention we must turn as one of the most powerful aids to the accomplishment of such a result."

Duell offered a similar message in other settings. For example, here is how Duell is quoted in a newspaper article called "Chances for the Inventor: Fame and Wealth Awaiting Him in Many Fields"
in the New York Sun from December 29, 1901: 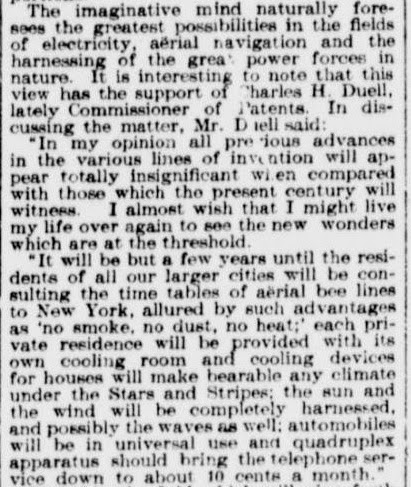 In short, when you hear claims about how someone in the US Patent Office once believed that it was about to run out of work, be very skeptical.