The most common way of talking about "barriers to trade" between countries has often involved measuring taxes on imports ("tariffs") or quantitative limits on imports ("quotas"). But import tariffs and quotas have been reduced over time, and the focus of many new trade agreements--along with the World Trade Organization-- is "trade facilitation," which means taking steps to reduce the costs of international trade. Some of of these costs involve transportation and communications infrastructure, but a number of the changes also involve administrative practices like the paperwork and time lags needed to get through customs.

Back in December 2013, the trade negotiators at the  World Trade Organization signed off on the Trade Facilitation Agreement, the first multilateral trade agreement concluded since the establishment of the World Trade Organization in 1995. The agreement legally comes into force if or when two-thirds of the WTO member countries formally accept it. So far, 18 have done so, so there's some distance to go. In its World Trade Report 2015, subtitled "Speeding up trade: benefits and challenges of implementing the WTO Trade Facilitation Agreement," the WTO lays out the potential gains and challenges.  The WTO writes:


While trade agreements in the past were about “negative” integration – countries lowering tariff and non-tariff barriers – the WTO Trade Facilitation Agreement (TFA) is about positive integration – countries working together to simplify processes, share information, and cooperate on regulatory and policy goals. ... The TFA represents a landmark achievement for the WTO, with the potential to increase world trade by up to US$ 1 trillion per annum.

How  big are the costs of trading internationally? The WTO writes:


Based on the available evidence, trade costs remain high. Based on the Arvis et al. (2013) database, trade costs in developing countries in 2010 were equivalent to applying a 219 per cent ad valorem tariff on international trade. This implies that for each dollar it costs to manufacture a product, another US$ 2.19 will be added in the form of trade costs. Even in high-income countries, trade costs are high, as the same product would face an additional US$ 1.34 in cost.

Here's a figure showing how these trade costs vary across types of countries. The report has discussion of variation by sector of industry as well. 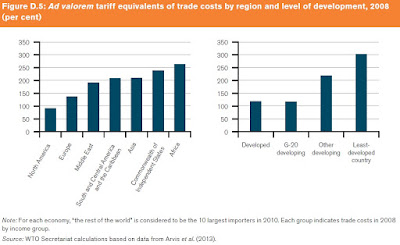 There is already widespread recognition that these costs are hindering trade, and so the  trade facilitation agenda is already spreading rapidly through regional and bilateral trade agreements. This figure shows the rise in the number of regional trading agreements, and also emphasizes that almost all of those agreements have trade facilitation components. Indeed, a defining characteristic of international trade in the 21st century is that it involves global value chains, in which the chain of production is divided up across multiple countries (for more detail, see here, here, or here). In effect, many regional trading agreements are seeking to facilitate these global value chains by reducing the costs of trade.

For a taste of what specifically is meant by "trade facilitation" in these agreements, here's a list of the trade facilitation provisions that are most common in regional trade agreements. Of course, the WTO report has details about what each of these categories means. 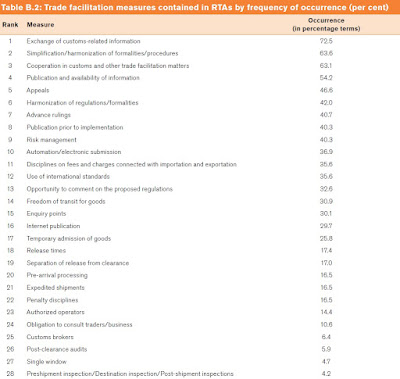 Shipping good and services across global distances and multiple national borders is never going to be quite as simple as dealing with a nearby provider who is operating within the same borders. How much can the trade facilitation agenda reduce the kinds of costs give above? Here's the WTO summary:


Trade costs are high, particularly in developing countries. Full implementation of the Trade Facilitation Agreement (TFA) will reduce global trade costs by an average of 14.3 per cent. African countries and least-developed countries (LDCs) are expected to see the biggest average reduction in trade costs. ... Computable general equilibrium (CGE) simulations predict export gains from the TFA of between US$ 750 billion and well over US$ 1 trillion dollars per annum, depending on the implementation time-frame and coverage. Over the 2015-30 horizon, implementation of the TFA will add around 2.7 per cent per year to world export growth and more than half a per cent per year to world GDP growth. ... Gravity model estimates suggest that the trade gains from the TFA could be even larger, with increases in global exports of between US$ 1.1 trillion and US$ 3.6 trillion depending on the extent to which the provisions of the TFA are implemented.

There are some other benefits to the trade facilitation agenda, as well. For example, reforming the legal and regulatory processes around customs, and reducing delays, means that there is less reason to pay bribes to facilitate the process--and thus reduces corruption. The WTO writes:


Trade-related corruption is positively affected by the time spent to clear customs procedures. Shepherd (2010) shows that a 10 per cent increase in trade time leads to a 14.5 per cent fall in bilateral trade in a low-corruption country, and to a 15.3 per cent fall in a country with high levels of corruption. By reducing the time required to move goods across borders, trade facilitation is therefore a useful instrument for anticorruption efforts at the border.

More broadly, steps to facilitate trade across borders by simplifying paperwork, improving infrastructure, and reducing delays will often be quite useful for domestic production chains, not just for international trade.  Thus, lots of organizations are pushing the trade facilitation agenda, not just the WTO. As one example, the report notes:


The World Bank is also active in the trade facilitation area. In fiscal year 2013, for example, the World Bank spent approximately US$ 5.8 billion on trade facilitation projects, including customs and border managementand streamlining documentary requirements, as well as trade infrastructure investment, port efficiency, transport security, logistics and transport services, regional trade facilitation and trade corridors or transit and multimodal transport. The Bank is also involved in analytical work such as the Trade and Transport Facilitation Assessment which “is a practical tool to identify the obstacles to the fluidity of trade supply chains.”