When High GDP No Longer Means High Per Capita GDP

For much of the 20th century, the economies of the world that had the largest GDP were also among those with the largest per capita GDP. The weight of global economic activity was aligned with the US, Canada, western Europe, and Japan. But we seem to be headed for a world in which this pattern no longer holds. For a few years now, the consulting firm PricewaterhouseCoopers been publishing reports offering long-range forecasts of the size of national economies for the year 2050. A recent example is the February 2015 report: "The World in 2050:Will the shift in globaleconomic power continue?"

Here's a table (which I snipped from a larger table in the report) listing the top 10 economies in the world by size, using what are called "purchasing power parity" exchange rates--which roughly means the exchange rates that equalize buying power of internationally traded goods across economies.  Using this measure, China now has the largest economy in the world (using market exchange rates, it will still be a few more years before China's economy overhauls the United States). It's striking to look out at these projections for 2050, when China will have by far the largest economy in the world--and India will be edging out the US for second place. Countries like Indonesia, Brazil, Mexico and Nigeria will also be in the world's top 10 largest economies. Only three of today's high-income countries--the US, Japan, and Germany--are projected to be in the top 10 by 2050. 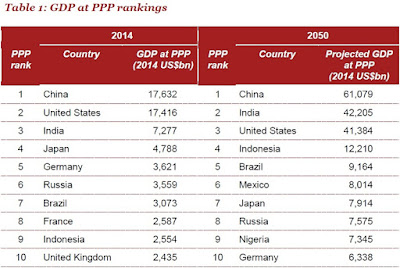 Of course, many of the largest economies in 2050 are also countries with large populations. In the 2050 projections, a large GDP does not imply a large per capita GDP. Here's a figure showing per capita GDP for a number of countries,with the darker lines showing the level for 2014 and the lighter lines showing the projection for 2050.  Even projecting rapid growth for countries like China, India, Indonesia, Brazil, and Mexico more than three decades into the future, their average standard of living as measured by per capita GDP will still be far below the high-income countries.

Of course, the precise levels of these long-range projections should not be taken too seriously. After all, they are based on estimates about rates of economic growth and other economic variables in countries all around the world decades into the future. The numbers also look a little different if one does the calculations using market exchange rates, rather than the purchasing power parity exchange rates. Readers who want details can check out the report.

But tweaking the numbers is not going to change the overall conclusion, which is based on the fact that when it comes to international relations, size matters. Countries with bigger economies tend to get more say, and the United States has been used to having the biggest say of all. But in 21st century, when it comes a wide array of decisions--international trade talks, decisions of the the International Monetary Fund and the World Bank, who leads the way during global financial crises, who dominates the flows of international investment capital and foreign aid, who has the power to impose trade or financial sanctions, and what kind of military threats are most credible--the shifts in the global economy suggest that the high-income countries of the world will not dominate as they did during most of the 20th century. Instead, countries with the world's largest economies, but much lower standard of living for their populations, will play a central role in setting the rules.