The vile and ghastly news of the mass shooting last week at Umpqua Community College in Roseburg, Oregon, sent me to the July 2015 report "Mass Murder with Firearms: Incidents and Victims, 1999-2013," written by William J. Krouse and Daniel J. Richardson for the Congressional Research Service.

The most-used definition of a "mass shooting" is that four or more people are killed in a single incident. Here's the pattern from 1999-2013. 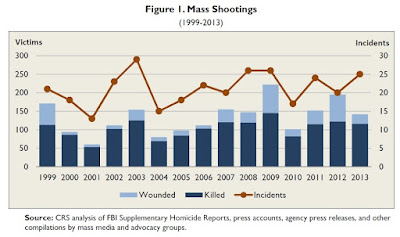 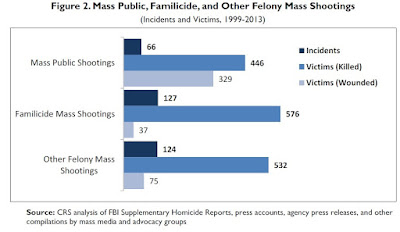 What if we just look at the pattern for mass public shootings over time, leaving out the familicides and other felony mass shootings? Here's the pattern. If you squint a bit at 2007, 2009 and 2012, you can sort of imagine an upward trend here, but given that there's a lot of annual fluctuation, it's not clear that the trend is a meaningful one over this time frame. 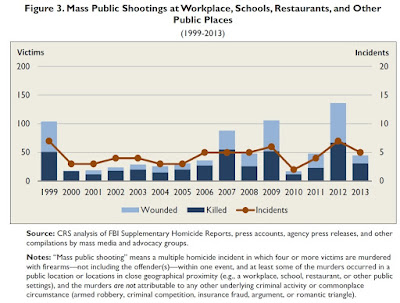 However, if one takes a longer time-frame going back several decades, it does appear that mass public shootings have risen. Krouse and Richardson write:

With data provided by criminologist Grant Duwe, CRS [the Congressional Research Service] also compiled a 44-year (1970-2013) dataset of firearms-related mass murders that could arguably be characterized as “mass public shootings.” These data show that there were on average:

These decade-long averages suggest that the prevalence, if not the deadliness, of “mass public shootings” increased in the 1970s and 1980s, and continued to increase, but not as steeply, during the 1990s, 2000s, and first four years of the 2010s.

As another way of illustrating this longer-term upward pattern of mass public shootings, consider only mass public shootings in which 10 or more people were killed. Up through 2013, there had been 13 such episodes in modern US history: seven occurring from 2007-2013, and six during the 34 years from 1966 to 2006.

It feels almost mandatory for me to tack on some policy recommendation at the end of this post, but I'll resist. Some of the newly dead in Oregon are not even in their graves yet. There have been 4-5 mass public shootings each year for the last quarter-century.The US population is 320 million.  In an empirical social-science sense, it's probably impossible to prove that any particular policy would reduce this total from 4-5 per year back to the 1-3 mass public shootings per year that happened in the 1970s and 1980s. In such a situation, policy proposals (whether the proposal is to react in certain ways or not to react in certain ways) will inevitably be based on a mixture of grief, outrage, preconceived beliefs, and hope, not on evidence.