The Shifting World Distribution of Income

The fastest-growing countries around the world, now and probably for the next few decades, will not be the high-income countries. As a result, the global distribution of income will become--gradually--more equal over time. Tomáš Hellebrandt and Paolo Mauro offer a projection in their essay, "China’s Contribution To Reducing Global Income Inequality," which appears as part of  China’s Economic Transformation Lessons, Impact, and the Path Forward, a group of short essays published in September 2015 by the Peterson Institute for International Economics (PIEE Briefing 15-3).  Here's the key figure. 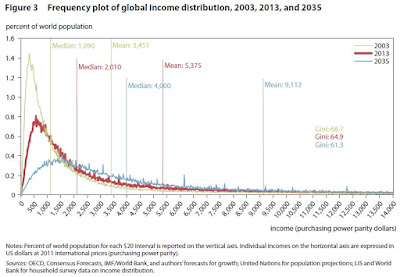 The horizontal axis shows income level per person. You should think of this axis as broken down into small segments that are each $20 in width. Then, vertical axis shows what share of world population receives that income level, for each $20 segment of income. (If you used income widths greater than $20, the overall shape of the green, red, and blue lines would be essentially the same, but because the width of the "bins" would be larger, the numbers on the vertical axis would be larger, too.)

For quick intuition, I'll just say that the Gini coefficient is measured along a scale from 0-100, where zero means complete equality of incomes, and 100 means that a single person receives all the income. To get a more intuitive feel for what the Gini means, the World Bank publishes estimates of Gini coefficients, when data is available, for countries around the world. Countries with a very high level of inequality, like Brazil, Mexico, Zambia and Uganda, have a Gini around 50.  In the United States and China, the Gini is about 40. In Germany and France, it's about 30. In highly egalitarian countries like Sweden or Norway, it's closer to 25. It's not especially surprising that the global Gini coefficient is higher than the Gini for any given country: after all, global inequality is greater than inequality within any given country.