Producers try to figure out what the market wants, and then supply it. For the second half of the 20th century, the largest single world market was the United States. Not surprisingly, many products and brands were aimed at the US market. But during the next few decades, the single largest market is going to be China--and China is also likely to be among the fastest-growing markets. Producers around the world will re-orient accordingly.

For example, the number of cars sold in China has exceeded the number sold in the U.S. market for several years now. Here's a table and a figure from the VDA (the German Association of the Automotive Industry) showing global sales figures for passenger cars. 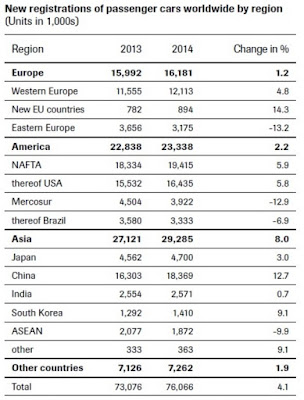 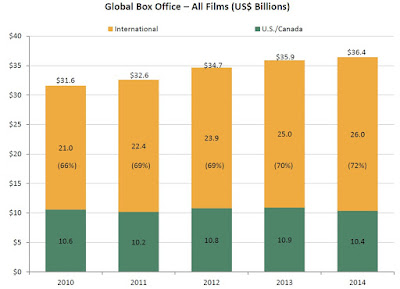 Here are the top international markets for movies. In 2014, China became the first non-US national market to exceed $4 billion in movie revenues. 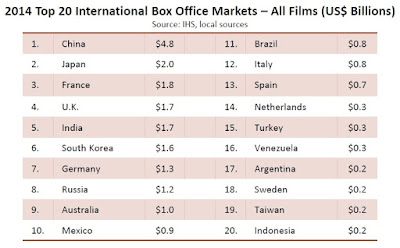 It's worth remembering that China has about four times as many people as the US and about one-fifth the per capita income, so China has enormous potential for continued rapid growth of car sales, movies, and many other goods and services.

As a thought experiment, imagine that you are a movie executive trying to focus on movies that can be shown with minimal adaptations in a number of large global markets: the US, Europe, China, Japan, Latin America. What sort of movies would you make? Well, you might focus on movies that are heavy on action and sound effects, but light on complex dialogue, as well as movies with a number of comic-book characters and aliens, who can appeal across conventional lines of ethnicity.

In the closing decades of the 20th century, a lot of Americans took it for granted that prominent global brands would either be American-based or at least would have a large US market presence. Meanwhile, people in many other countries found it bothersome (sometimes mildly annoying, sometimes downright aggravating) that they were so often confronted in their own countries--both on store shelves and in advertising--with products that had a strong American identity. But global demand is shifting. The huge US market will remain important, of course. But more and more, Americans are going to be seeing brands and titles and products where the US market is just one among several--and not necessarily the most important one.
Posted by Timothy Taylor at 7:00 AM