Greater Inequality of Returns Across US Firms

The returns to investing in US firms have become more unequal over time--a fact which might help to explain the rise in income inequality. Jason Furman and Peter Orszag provide evidence and discussion in their October 2015 paper, "A Firm-Level Perspective on the Role of Rents in the Rise in Inequality." 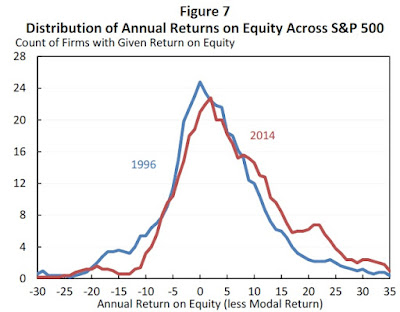 As another measure, here's a related but different calculation. Here, the approach is to look at the "return on invested capital" for publicly-traded nonfinancial firms. As they explain, "the return on invested capital ... [is] defined as net after-tax operating profits divided by capital invested in the firm. This measure reflects the total return to capital owners, independent of financing mix." That is, the measure takes into account whether some firms have lots of debt or lots of equity, and looks at all capital invested. The big takeaway here is that if you look at firms at the 90th percentile of return on invested capital and compare them to firms at, say, the median (or 50th percentile), the relationship doesn't change too much from 1965 through the 1980s. But after that point, the firms with a 90th percentile rate of return start doing comparatively much better. 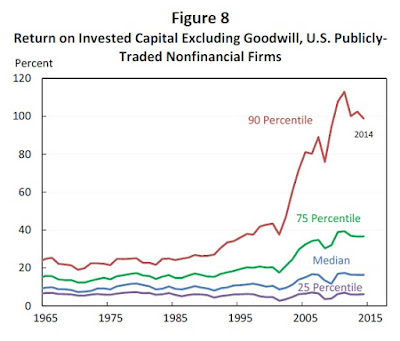 The growth of these high-flying firms is part of the explanation for the rise in income inequality during the last quarter-century. What happens is that pay is higher for those who work at highly profitable firms. The overall growth in income inequality arises not because people inside a given firm are seeing more inequality, but because the between-firm level of inequality is rising. As evidence on this point, Furman and Orszag discuss a 2014 study by Erling Barth, Alex Bryson, James C. Davis, and Richard Freeman, "It’s Where You Work: Increases in Earnings Dispersion across Establishments and Individuals in the U.S."


Song et al. found that essentially all of the increase in national wage inequality from 1978 to 2012 stemmed from increasing disparities in average pay across companies. By contrast, their analysis suggests that the wage gap between the highest-paid employees and average employees within firms explains almost none of the rise in overall inequality. ... [W]hile individual wage disparities have clearly increased in recent decades, virtually all the increased dispersion is attributable to inter-firm
dispersion rather than intra-firm dispersion.

Just why this level of intra-firm dispersion in returns and the accompanying inequality of incomes has risen is a subject still being researched, but various hypotheses suggest themselves. One possibility suggested by Furman and Orszag is that certain industries have become more concentrated, allowing firms in that industry to earn higher profits in a situation of less competition. Another possibility is that a small number of firms are adopting new technologies, but these technologies are not diffusing as rapidly from the cutting-edge firms.  Still another possibility is that the high-profit firms are more likely to be in industries that need a disproportionate amount of highly-skilled labor, which would help to explain the high pay in those industries. Thinking about how rising inequality in returns across firms is related to rising inequality of incomes seems likely to be a hot topic in the next wave of research on income inequality.